What will 287(g) really cost taxpayers? 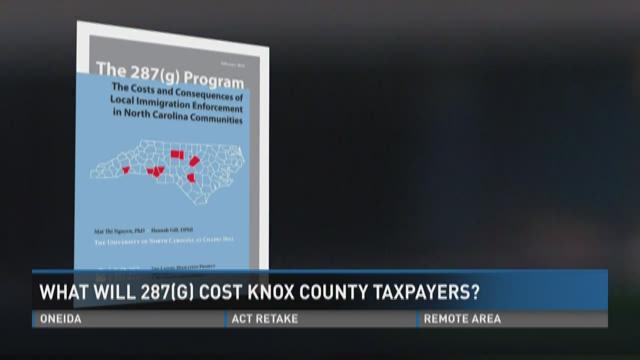 The Knox County Sheriff’s Office is still working out the kinks of its recently approved partnership with federal immigration officials.

The controversial 287(g) program trains deputies to check a suspect's immigration status after an arrest is made.

KCSO says it will cut down on how long the department has to hold detainees to determine their immigration status, but some counties that already adopted it have faced serious financial dilemmas.

A 2012 study by researchers at the University of North Carolina Chapel Hill analyzed the first two counties in North Carolina to adopt the same 287(g) "jail model" Knox County was approved for.

In Mecklenburg County of North Carolina, training supplies, salaries for four weeks training, plus staffing costs for 10 ICE-trained deputies all amounted to $500,000. But the big expense came with the cost of detaining immigrants, which cost the county $4.8 million.

It cites similar costs in jurisdictions nationwide that led to a spiraling budget deficit in an Arizona county and heightened taxes in a Virginia county.

“In Prince William County in Virginia, the estimated cost of the 287(g) program is $6.4 million annually and $25.9 million for five years,” the study reads. “The initial costs were much higher than anticipated and allocated for, resulting in the Board of Commissioners raising property taxes by five percent and also reducing funds given to police and fire services.”

But the Knox County Sheriff’s Office already houses immigrants - often for several weeks at a time - while ICE considers their status, and officials argue the program will help shorten that detainment.

On Thursday, the sheriff's office clarified it will not hire any new deputies for the program. Instead, ICE will train 12 deputies who already work with KCSO on how to operate ICE's computer system.

A top KCSO administrator told 10News to expect "no expenditure to Knox County taxpayers, because it's just another layer in our booking system." That administrator said those 12 deputies would still perform other duties for the department, in addition to operating ICE's system.

Additionally, because of many immigration lawyers advise their clients to delay posting bond, Jennings warned, any increase in immigrant detainment could prove especially expensive for the county.

“We will typically advise our clients to not post a criminal bond, because it just means that you’re going to be whisked away by ICE and you won’t be able to defend your case," Jennings said. "So they’re going to spend a longer time in jail waiting for their court date than if there had been no detainer issued in the first place.”

Knox County is currently the only law enforcement agency in Tennessee to participate in the program.