From the yellow bird in Alabama to the bright white albino in Knoxville, our feathered friends are breaking the cardinal rules of color. 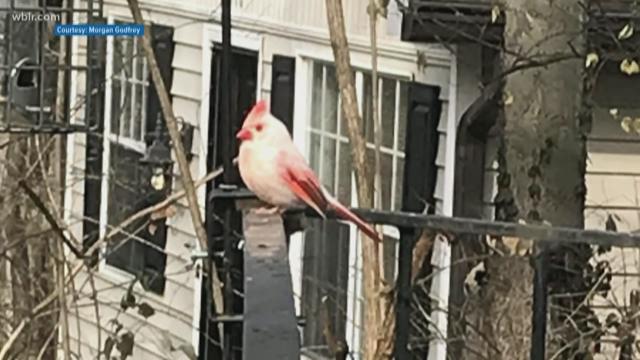 Everybody knows about the bird. Don't you know about the bird? The bright yellow cardinal in Alabama has attracted national attention and a large ornithological following online.

"From what I hear, a lot of folks are 'flocking' to Alabama to see this bird," joked Michael Ogle, curator of birds and reptiles at Zoo Knoxville. "It is unique. Basically, it is a random mutation that gives this bird its yellow color. With traditional cardinals, the male is bright red and the female is a duller."

Not to be outdone by the mutant bird from Alabama, Morgan Godfrey of Knoxville sent 10News several shots of a bright white cardinal in her back yard in Sequoyah Hills.

"This does appear to be an albino cardinal," said Ogle as he looked at Godfrey's photographs. "They are generally rare. If it is a recessive gene, it means the mom and dad each carried the gene, and then there's a small percentage the offspring are albino. The same goes for the yellow cardinal, if its mutation is recessive."

The strange birds of a feather can probably thank their parents for winning (or losing) the genetic lottery.

"Typically, there's a reason they don't happen every day. Usually, these birds with rare colors don't survive. They get picked off by predators because it is so easy to see a bright white bird in their habitat. Or they're not allowed to breed because birds are very visually-oriented. If you don't look like you're supposed to look, a mate is usually not going to choose you," said Ogle.

The bright yellow male in Alabama may end up green with envy of all the other love birds if he is unable to find a mate to pass on his golden genes.

As for the albino in Knoxville, it may have a better chance because it may possibly be female.

"With bird mating, a lot of it is female selection. I cannot say if the bird is female from looking at the photograph, but the video shows it with a bright red one [cardinal]. That would lead me to believe it is female. We have had such an unseasonably warm winter, a lot of birds are already starting to nest and match up with a mate."

There are also blends of albino and typical cardinals that are known as piebald cardinals. They have patches of white, but do not have pink eyes of a full albino.

White, red, or yellow, there's always a chance in the genetic lottery for rare birds that break the cardinal rules of color.

"Maybe that yellow bird in Alabama will be able to find a mate and there will be more in the future. Stranger things have happened."