Intermittent closures on both directions of travel on S. Illinois Ave. due to emergency utility repairs

According to a press release, closures are expected to begin at 7 p.m. and last until midnight. The closures should last approximately 20 minutes each. 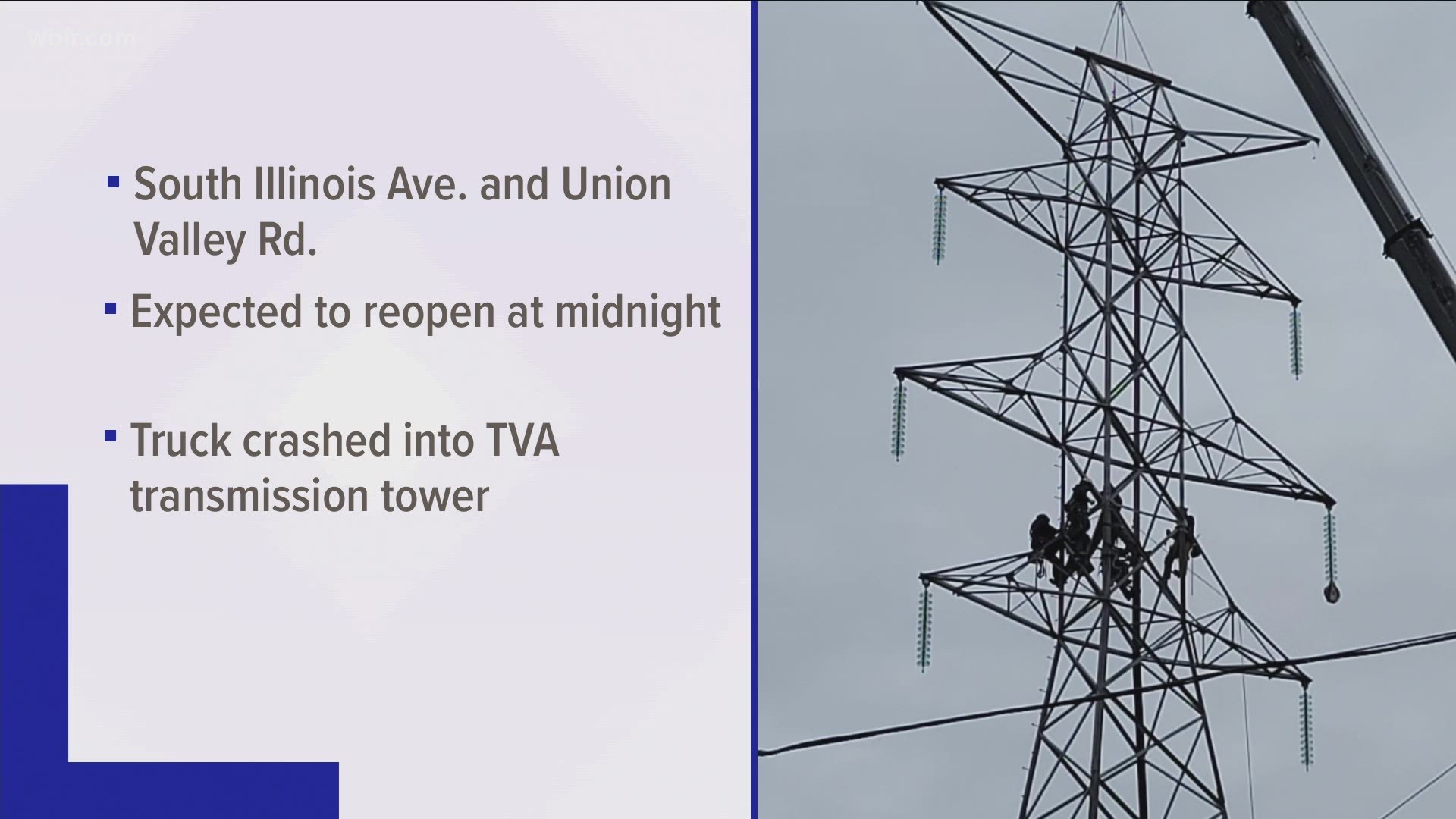 OAK RIDGE, Tenn. — UPDATE (Jan. 27) Officials said that both directions of travel on South Illinois Avenue near Union Valley Road will be closed for several short periods of time starting Wednesday around 7 p.m. due to crews working on emergency utility repairs related to the crash that knocked down the TVA transmission tower on Friday.

The crash caused a widespread power outage and road closures through the weekend.

According to a press release, closures are expected to begin at 7 p.m. and last until midnight. The closures should last approximately 20 minutes each.

The Oak Ridge Police Department will have rolling roadblocks to stop traffic while new cables are pulled across the highway without endangering the traveling public.

UPDATE (Jan. 25) Officials said that power has been completely restored to all Oak Ridge Electric customers.

Around 12:20 a.m., the Oak Ridge Police Department said that South Illinois Avenue has reopened from Edgemoor Road to Lafayette Drive.

Although South Illinois Avenue has been reopened, officials encourage drivers to be cautious and prepared for delays and detours while crews continue to work off the roadway.

UPDATE (Jan. 24): The intersection of South Illinois Avenue and Union Valley Road is expected to reopen by midnight, ahead of the Monday morning commute. The roadway has been closed since Friday afternoon after a truck crashed into a Tennessee Valley Authority (TVA) transmission tower, causing the highway to be impassable.

TVA and Oak Ridge Electric crews worked with the help of the Oak Ridge Police Department and Public Works Department to maintain a safe work environment while the very complex emergency repair was conducted over the weekend, according to a release from the city.

While the roadway will reopen late Sunday night, drivers should still be cautious and prepared for delays and detours around equipment while crews continue to work off the road.

Power remains out for a small southeast portion of the City near the site of the crash, including the University of Tennessee Arboretum, according to the City of Oak Ridge.

The crash, which happened just before 4:30 p.m. Friday, caused widespread outages across the City, according to officials. Electric crews were able to get power restored for a majority of the City within a few hours, with the exception of that small southeast part of the City.

The Tennessee Highway Patrol is leading the crash investigation.

UPDATE (Jan. 23, 11 p.m.): Officials said that traffic was still being detoured around the transmission tower that was knocked down Friday.

S. Illinois Ave was closed from Bethel Valley Rd to Lafayette Dr. Drivers were advised to find alternate routes and to expect delays on the road.

The road was expected to remain closed through the evening.

Highway 62 was still closed Saturday evening, due to heavy equipment and low-hanging lines. The road was also closed for the safety of crews working to remove the damaged structure and make repairs.

Officials also said that power to the Arboretum was still out Saturday evening, even though it was restored for most parts of Oak Ridge.

UPDATE (10 p.m.): Officials said that the power was restored for most of Oak Ridge by 10 p.m. Friday night, after widespread outages in the area.

They said that the remainder of areas that were still without power would be restored in a few hours.

The Tennessee Valley Authority said that a Chevy 2500 towing a skid steer ran off of Highway 62 in Oak Ridge, at the intersection of S. Illinois Avenue at Union Valley Road. It damaged a TVA transmission structure, and the highway was impassible as a result.

The structure was hanging partially above the roadway, with lines too low for vehicles to clear. The line de-energized, and additional structures were damaged, officials said.

Crews were working to remove the structure and make repairs Friday night.

Oak Ridge officials said that crews may continue working to restore all power through the weekend.

Widespread power outages were reported Friday afternoon in Oak Ridge after a truck hit a transmission tower at the intersection of South Illinois Avenue and Union Valley Road.

Lauren Gray, the city spokeswoman, said crews were working as fast as possible to restore electricity.

The Tennessee Valley Authority said the tower was one of its 161-kilovolt lines. Crews are working to restore the structure into Saturday. TVA said power has been restored to most who were initially impacted.

Outages were first reported about 4:30 p.m. Officials said power was expected to be restored within two hours, except for the far southeast corner of the city. That area could take more time, officials said.

"City of Oak Ridge Electric Department phone lines are down due to the outage. The cause of the outage is not known at this time but we will post any and all updates on Facebook and Twitter as we get them," Gray told 10News.

The driver of the truck and a passenger were suffering from non-life-threatening injuries, officials said. Both were transported to local hospitals. The Tennessee Highway Patrol is leading the investigation.

Traffic was backed up past Solway at Pellissippi State Community College as a result of the crash. South Illinois Avenue was partially closed as crews worked at the site. TVA said drivers should avoid the area as the road is temporarily impassible.

POWER OUTAGE: As of 4:30 p.m. on Friday, 1/22, there are currently widespread outages across the City of Oak Ridge. Crews are working to get power back up and running ASAP. City of Oak Ridge Electric Department phone lines are down due to the outage.