One year later, this pig and his family continue to rebuild after a miracle during the wildfire. 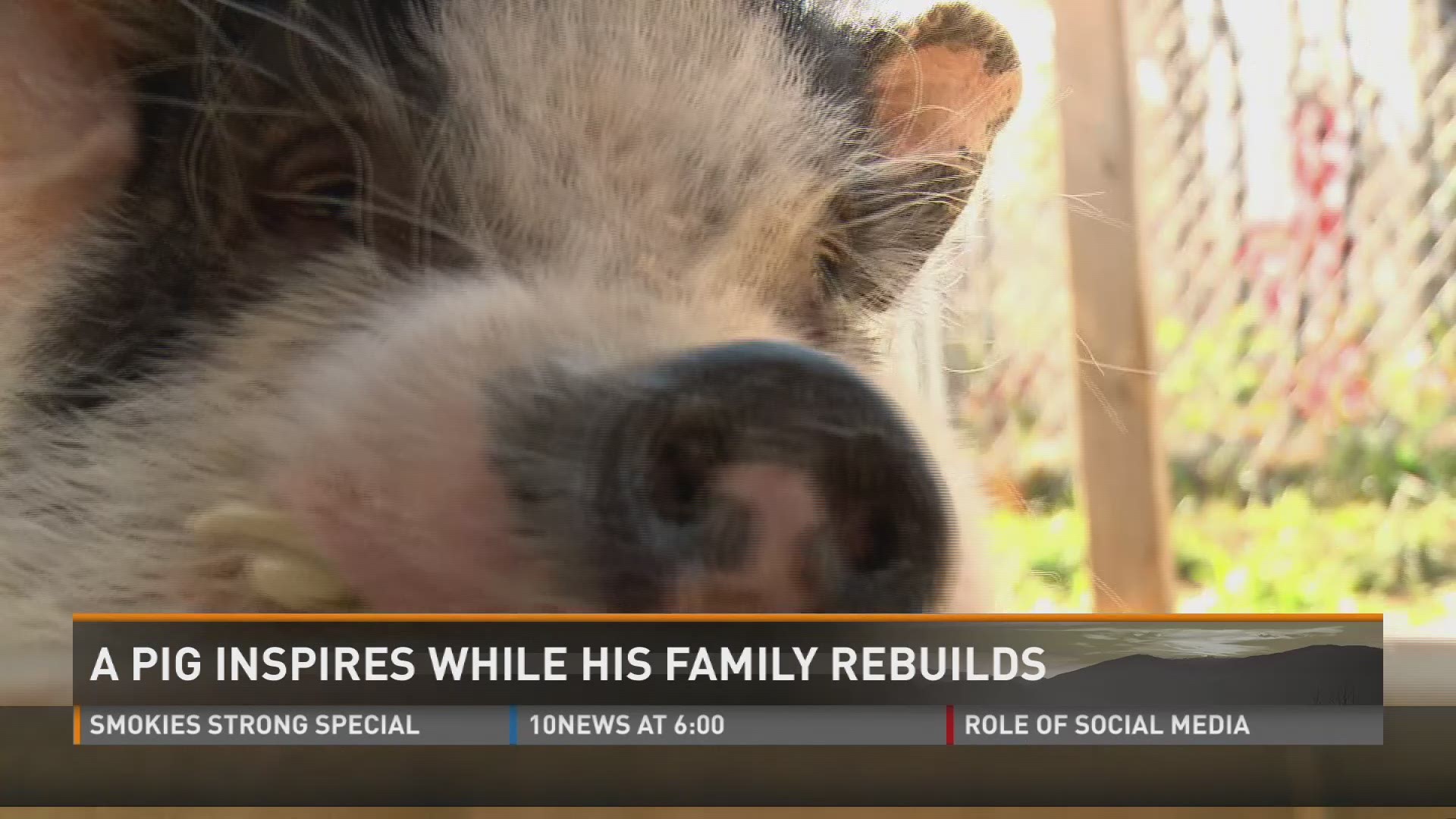 Just outside of Gatlinburg, right off the Spur, you'll find the Holmes family.

There are Robert and Amy, the patriarchs, and their three kids. Nathan is the oldest at 19-years-old. He lives away from home. Andrea is 16 and the youngest, Wyatt, is 2-years-old.

And then, of course, there's Charles.

If you took a look at Charles today, you'd think he was just an ordinary pig: tough exterior, loves to eat, the usual pig things.

That couldn't be further from the truth.

One year ago, Charles was surrounded by fire and flames. As the wildfire in Gatlinburg inched closer and closer, Charles buried himself in the mud, fighting the flames and certain death.

"They said a human nor animal could of survived that," Rob said, "and here's Charles."

The story of this pig who prospered has served as a rallying point for so many who suffered through the fires. Rob and Amy captured the moment in a book, "The Miraculous Story of Charles the Pig," written and illustrated by the two.

The book has brought the story of this pig far beyond their corner of East Tennessee. The family has sold a copy in nearly every state in the country.

"He has followers all over the world," Rob reflected. "I just got an order from Switzerland, I've had calls from Germany, from Canada, we even sent a book to Japan."

If you'd like to purchase the book or stuffed animal of Charles, you can visit HERE.

The money earned from book and merchandise sales goes straight to the family and their funds to build a new home. The Holmes have raised about $60,000 so far, but need about $60,000 more to reach their goals.

If you'd like to donate directly to the family, you can visit their GoFundMe page HERE.

With the help of a family friend, the Holmes family began rebuilding their home on the very same ground it stood before. The foundation and skeleton of the house were set, Rob hoped to be finished by Easter of 2018. The family was living in a trailer next to the property and, of course, Charles was right next door.

After everything that happened on the night of Nov. 28, 2016, the family didn't want Charles to be too far from them. In their most difficult night, one of the toughest decisions was leaving the pig behind. The family had to run from the fire, they had no time to carry a 200-pound pig, all they could do was open the pen.

"It was like he was telling me, 'Dad, go. I'll be alright,'" Robert Holmes said.

Amy said she thinks Charles knew what was going on, he knew what he had to do.

"Animals are a lot smarter than we give them credit for, that night might not be one that anyone will forget, but it's one he forgave," she said.

As a token of appreciation for the money Charles has helped the family raise and the hope he gave them after the fires, Rob said they are building the pig his own mini-home, equipped with heat and air conditioning.

What we knew then: The 1st week of wildfire coverage

True Volunteers: Stories of heroism and generosity from the wildfires

When disaster struck Sevier Co., Dolly and the My People Fund stepped in to help