They were separated as fire closed in on their home and city, but one year after that terrifying night Pete and Joy Jucker are fully of positivity. 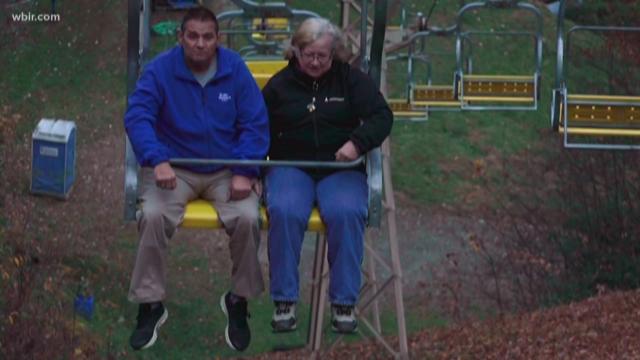 For one couple, Pete and Joy Jucker, it’s their second home.

Both are ski patrollers and instructors during the winter season, and operate a puzzle store inside the chalet.

“Christmas is when we are the busiest, families come up here looking for something to do, and I want to turn people on to the fun sport of skiing,” Pete said.

“I took her to the top of Mogul Ridge and I told them to close the ski lift so I could propose,” described Pete.

This year, their favorite views bring a changed landscape, and a new perspective.

“It’s a different kind of view. You do look at it different, I can see where the fire was and know the effect of the fire on the ground, but up here you see how much did not catch on fire, and the parts that will remain,” Joy said. “The most prominent feature didn’t change at all, the skyline!”

The couple is one of many families who survived a terrifying night, losing their mountain home last November.

MORE: Couple separated during fire reunite and vow to rebuild

“The whole process has helped me reflect and think about things that are important and not so important, there's a way to move forward that's positive,” Pete said.

It's that attitude the Jucker's have shared since we met them day one.

“We've always been cup half full type people never empty, we always strive to have the cup overflowing with positivity rather than negativity,” Joy said.

Homes still battered and burned after the November 28th wildfires, Pete hung flags of encouragement throughout his neighborhood.

He dubbed the act, the “Heal & Rebuild” project.

“Now some want to frame them and hang them in their new heal and rebuild house!” Pete said.

The couple is rebuilding themselves, while taking steps to make Gatlinburg a fire wise community.

“Firewise is having an ongoing education, being proactive,” explained Pete. “Solve problems instead of saying we can't do it.”

Because for this family, there's no mountain too high to overcome.

“We are a town that is alive and kicking!”

“I’m just thankful for the area we live in, and that it’s recovering nicely,” Joy said.