Would he like to stay on as UT prez? Randy Boyd says yes

The Knoxville entrepreneur and philanthropist has been interim president since fall 2018. 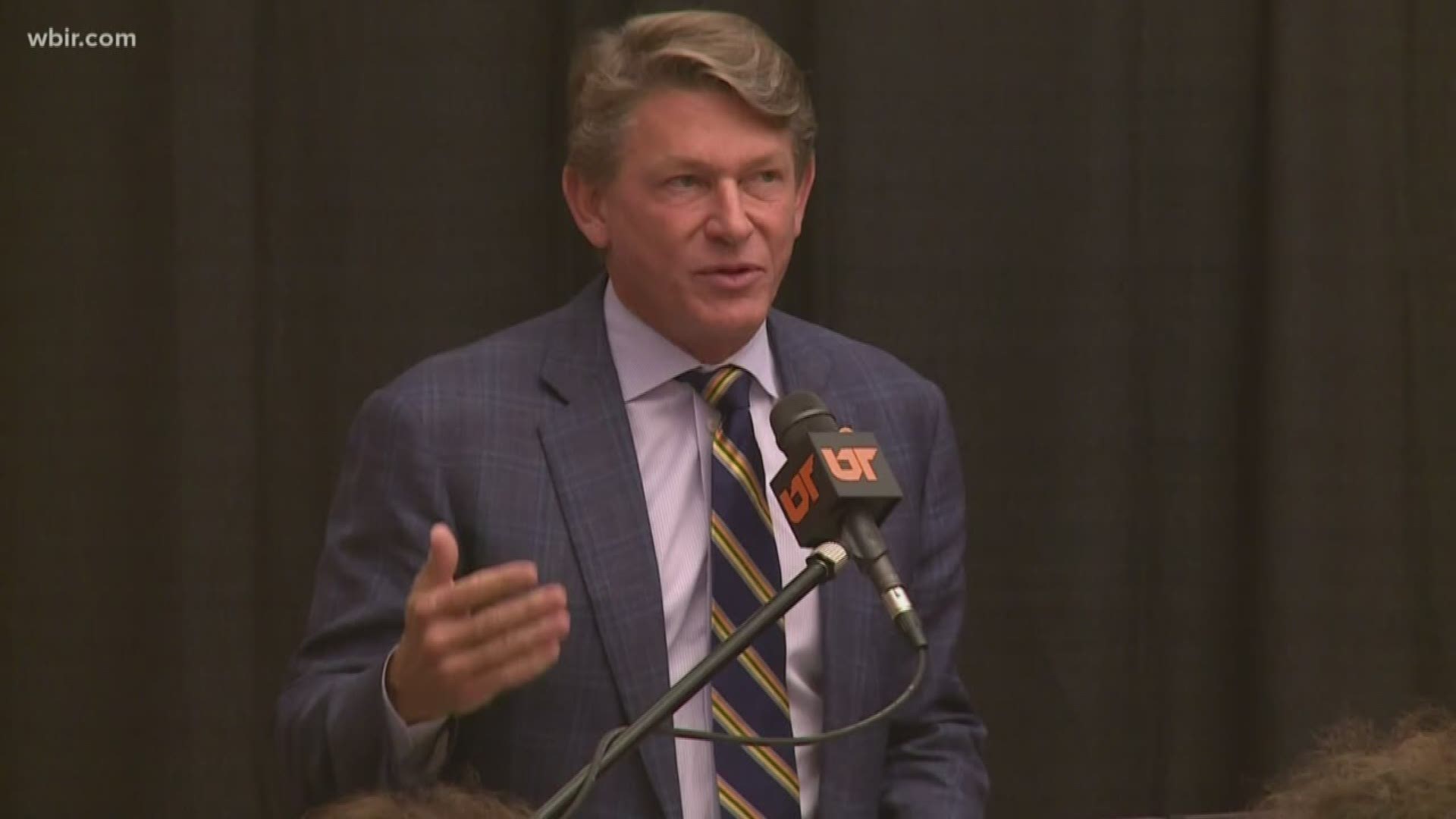 KNOXVILLE, Tennessee — Sure, the University of Tennessee's interim president would be interested in extending his hitch at the helm. Why not?

Randy Boyd is having fun.

When he agreed last fall to become the interim president, it was expected the entrepreneur and philanthropist would stay up to two years max. But then he got into the job of running the UT system, which consists of UT-Knoxville, UT-Chattanooga and UT-Martin among other campuses.

"The thing is, we’ve got so much positive momentum," Boyd said on WBIR's "Inside Tennessee", which airs Sunday, Oct. 27. "There's a lot of exciting things happening and I would hate to lose that momentum."

The full interview with Boyd also will be posted Monday, Oct. 28, on our website.

The UT grad added: "It’s hard to imagine something that could make a bigger difference in our state than serving at the University of Tennessee."

UT's Board of Trustees, of course, would have a say in whether Boyd stays as permanent UT system president.

Known for his energy and drive, Boyd, who turned 60 on Oct. 24, may be on the job seven days a week. It seems that way anyway.

He enjoyed visiting high schools across the state so much recently to tout the new UT Promise scholarship program that he decided to do another tour. On the first go-round he and staff traveled more than 1,200 miles and appeared before 3,000 students. That was in about three days.

UT Promise starts next year. It will allow student residents whose families make less than $50,000 to attend one of the UT schools for free, assuming they qualify academically.

The system is recruiting students to apply right now. The deadline is Nov. 1.

They also are looking for adult mentors willing to help guide students as part of the program, he said.

Boyd also is working to raise the percentage of Tennesseans who have a degree or post-secondary certificate to 55. Six years ago the state was at 32 percent; today the figure is 43 percent.

"We've still got a long ways to go, but we’ve made incredible strides," he said.

One of Boyd's biggest tasks after he took over was finding a chancellor for the Knoxville campus. Beverly Davenport lasted a little more than a year before she was dismissed in May 2018.

Boyd said he wanted a visionary. He wanted someone who would bring stability but also was ready to introduce change.

He picked Donde Plowman, who started in July. Boyd said he's pleased with the decision.

She's committed to being here seven to 10 years, and she's "laser-focused" on student success, he said.

Boyd said he's also been touched and energized by the level of commitment by UT alumni and supporters.

For example, in September WBIR reported on a Florida boy's love of UT but humiliation at the hands of some classmates after he tried to make his own UT logo for a school event. The boy's story raised awareness about bullying and inspired a T-shirt sales drive.

More than 109,000 shirts featuring the boy's UT design have been sold at $15 apiece, with half the proceeds going to support anti-bullying efforts.

The system heard from fans and non-fans across the nation, Boyd said.

And then there was the University of Alabama fan who passed along -- believe it or not -- a check for $1,000.

In the comments section of the check, the person wrote that they hated UT -- with lots of exclamation points -- but respected how UT fans had rallied around the boy.

"Think about the history -- how many times have we gotten a $1,000 check from an Alabama fan saying they respect us?" Boyd marveled.

Also during his appearance on "Inside Tennessee" Boyd addressed the likelihood that his Tennessee Smokies baseball club could move from Sevier County to downtown Knoxville.

And he spoke briefly about a project his father Tom Boyd is involved in called Ancient Lore Village, proposed in South Knox County. It involves building a resort with a fantasy theme akin to books like "The Hobbit".

Boyd said he's been spending so much time on his own job to get involved in Ancient Lore.

But, "My dad is 81 years old and still coming up with big ideas, so he's an inspiration to all of us."