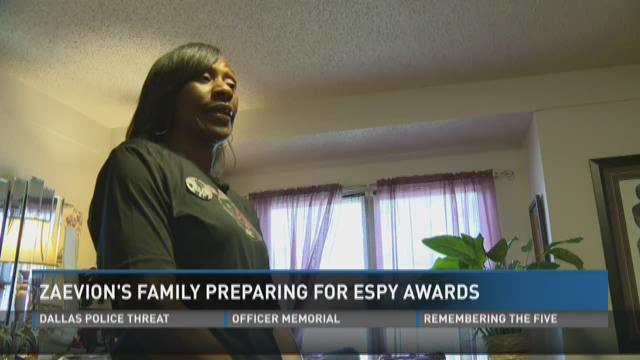 Days before ESPN honors Zaevion Dobson with the Arthur Ashe Courage Award at the 2016 ESPY awards, the Dobson family is preparing for an emotional trip.

Zaevion's mother Zenobia said the nation needs to hear his story now more than ever.

“I have been praying throughout his whole situation,” said Zaevion’s mother Zenobia. “I've just been asking for guidance through it all."

In December, Zaevion Dobson, 15, died after diving on top of friends to save them from gunfire in the Lonsdale area of Northwest Knoxville.

On Wednesday, Zenobia will accept ESPN’s flagship award for courage on behalf of her son. Past honorees include Michael Sam, coaching legend Pat Summitt and Nelson Mandela.

"That's a high honor, and I know it's no one but God,” Zenobia said.

On Sunday morning, she and a dozen relatives will fly to Los Angeles to begin a two-day rehearsal in advance of the award show.

Zenobia said she is still finalizing her acceptance speech.

"My voice needs to be heard about how I feel about gun violence. Laws need to be changed. We need to save our innocent lives."

She hopes her speech will help to move the country toward greater support for comprehensive gun control.