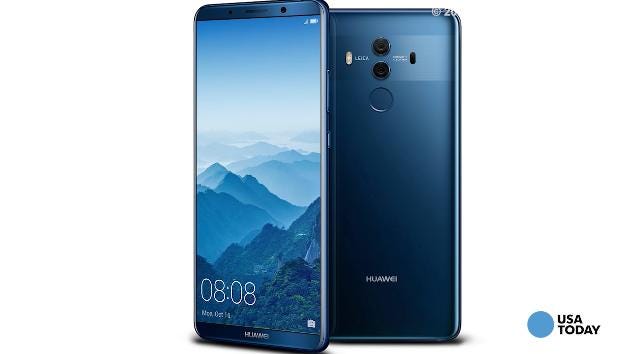 Credit: Dell/handout
Now available in new colors and with Dell Mobile Connect, which lets you wirelessly tether a smartphone, the Dell XPS 13 is the smallest and most powerful 13-inch laptop in the world.

LAS VEGAS—What happens in Vegas doesn't always stay in Vegas — at least hopefully not for a bunch of the products showcased here last week.

Some of the technology that debuts at CES, the annual consumer electronics show, turns out to be “vaporware,” that is, it will never make a commercial debut for one reason or another. But the following ten products should have a chance vying for space in your home or driveway.

More: The CES secret few talk about: Past hits can fizzle with consumers

Credit: Lenovo/handout
Beginning this summer, Lenovo’s VR headset doesn’t require a connection to a device, like a smartphone, laptop, or game console.

Virtual reality hasn’t taken off as fast as many predicted, but perhaps it’s because of the annoying cables coming out of the back. Or with some models, you need to shove your phone inside the headset. Instead, Lenovo’s Mirage Solo is the first “self-contained” VR headset. It doesn’t need a phone, PC, or video game console. Based on Google’s Daydream platform, you’ll download games over Wi-Fi to the local 64GB of internal storage (or snap in a microSD card), or you can sideload games using USB. It ships with a remote and will be priced under $400 when it debuts by the summer.

A store on wheels?

Credit: Toyota Motor/handout
Autonomous vehicles may not be coming soon, but Toyota’s e-Palette is an interesting spin on the self-driving technology, including food delivery and mobile storefronts.

Toyota chose CES to unveil e-Palette, a concept for the future of autonomous (“self-driving”) vehicles. Perhaps one day in the not-too-distant future, your vehicle will not only drive you around from point A to point B, but deliver you food on-demand, and even serve as a mobile storefront that brings products to you instead of the other way around. Toyota is teaming up with Uber, Pizza Hut and Amazon, to start, but the first live demonstration of Toyota e-Palette won’t be until the Tokyo Olympics in 2020.

Credit: Dell/handout
Now available in new colors and with Dell Mobile Connect, which lets you wirelessly tether a smartphone, the Dell XPS 13 is the smallest and most powerful 13-inch laptop in the world.

Winner of a Reviewed.com Editor’s Choice Award, as well as top nods from Mashable and Digital Trends, the all-new Dell XPS 13 retains its place as the world’s smallest 13-inch laptop (essentially squeezed into an 11-inch frame), but it’s now the most powerful 13-inch laptop, thanks to its 8th Gen Quad Core Intel processor. Along with all other consumer and gaming laptops, the XPS 13 works with Dell Mobile Connect, which lets you wirelessly pair your smartphone (iOS or Android), so you can get texts and phone calls on the laptop. Including new colors, Alpine White and Rose Gold, the Dell XPS 13 is out now, starting at $999.

Credit: Huawei/Handout
Unveiled at the 2018 CES, Huawei’s Mate 10 Pro is a stunning Android device with an advanced A.I.-driven Kirin 970 processor.

Out of the new phones that made its debut at CES, the Huawei Mate 10 Pro impressed this journalist more than others because of its sleek design, new Leica cameras (which take seriously stunning images), and a battery that yields more than three days of music playback, up to 22 hours of video playback, and up to 25 hours of 3G calling. Perhaps most importantly, the new Kirin 970 processor is garnering quite a bit of buzz for its advanced A.I. (artificial intelligence), including the ability to predict the apps you’ll use and load it into memory even before you tap the icons.

Preorders start February 4, but since the phone maker wasn’t able to secure a carrier deal in the U.S., you’ll have to buy it directly, unlocked, for $799.

Google with a view

Credit: Harman International Industries/handout
Google Assistant is being built into many “smart screens,” that give access to a voice-enabled personal assistant.

There was no shortage of voice-enabled Amazon Alexa and Google Assistant-powered devices at CES this year – from TVs and cars to Wi-Fi routers and even shower heads – and there were no fewer than four different “smart displays” powered by Google Assistant. Rivaling the Amazon Echo Show, the JBL LINK View is an 8-inch touch display and speaker that lets you ask Google a question or give a command, and along with getting a human-like voice responding to you, you’ll also see info on the screen, such as a multi-day weather forecast, recipe, photos, a YouTube video, and album art for your streaming music. Make free Google Duo video calls through its 5-megapixel camera, too. No price announced, but should be out by summer.

Credit: Sony/handout
Sony's 'The Wall' was impressive, but the Sony X900F is the TV you could actually see in your home.

CES always has plenty of big and beautiful televisions (and gaming monitors), but many won’t likely debut anytime soon, if at all, be it Samsung’s modular “The Wall” (made up of many smaller panels) or LG Display’s “rollable” TV concept. A more practical and pretty pick out this spring is Sony’s X900F, powered by the company’s X1 Processor, Dolby Vision and HDR 10, and full-array of LEDs across the back of the panel instead of being only edge-lit (resulting in better contrast, higher brightness, and more vivid colors). In sizes up to 85 inches, this 4K TV also has a dedicated Google Assistant button on the remote.

Credit: LG/handout
Smart appliances were big once again at the 2018 CES, with LG’s latest InstaView model featuring many bells and whistles.

LG is no stranger to smart appliances, and CES 2018 showcased a few of them – including stovetops, dishwashers, washers and dryers – but it was the new InstaView ThinQ refrigerator that caught my eye, featuring a 29-inch touchscreen that becomes transparent if users knock on it twice. You can draw notes to the family on the screen, place virtual stickers, pull up recipes, and be notified of expiration dates on food. Or you can talk to it using Amazon Alexa. There’s also a wide-angle camera on the inside of the fridge that will let you remotely view your fridge to see if you’re out of milk or eggs.

More: 6 coolest gadgets from CES you'll likely see in your house this year

While we’ve seen a little of the Hyundai Nexo in the past, CES attendees were treated a proper look at this near-production-ready hydrogen fuel-cell vehicle. Due out as early as this fall, it will yield about 370 miles per charge (hydrogen powers the electric motor), and with a significant power boost compared to Hyundai’s first-gen fuel-cell vehicle, the five-year-old Tucson. Hyundai says Nexo can go from 0 to 60 mph in 9.5 seconds. The South Korean company sees fully autonomous vehicles by 2021, though the Nexo can do some pretty cool semi-autonomous tasks for you, like pick you up at the end of your driveway or park your car into tight spots while you watch from outside. The only byproduct of a hydrogen vehicle is water or vapor, therefore much better on the environment than gas or diesel cars.

More: The coolest car tech from CES that you'll be driving with any day

How do you fight the growing epidemic of obesity among those who’d rather play with digital devices than be physically active? The answer may lie in the winner of the 2018 CES “Last Gadget Standing” competition. Designed for indoor or outdoor fun, the Play Impossible Gameball ($99) resembles a regular inflatable ball, but it’s embedded with patent-pending sensor technology that connects it to an app via Bluetooth. Played solo or with friends, compete and challenge your ball skills with multiple minigames that may involve throwing or shaking the ball. When Gameball runs low on power, you can refuel in 20 seconds, which yields another hour of play.

Credit: DAVID MCNEW, AFP/GETTY IMAGES
This is the newest generation of the Aibo robot, which uses artificial intelligences.

Sony is back with its aibo robotic dog, and as you might expect, it’s light years ahead of the first aibo that debuted almost 20 years ago. With advanced engineering for fluid movement, more sensors on its body, and artificial intelligence (including more personality), it was a huge hit at CES this year. Look closely and you can see two cameras — in its nose and near its tail – to help identify family members and map your home environment. It's certainly not cheap at $1,800 and it's only available in Japan, but play with aibo for just a few minutes and you’ll immediately see its charm. Doggone cute!

More: These cute robots want to replace Amazon Echo in your home