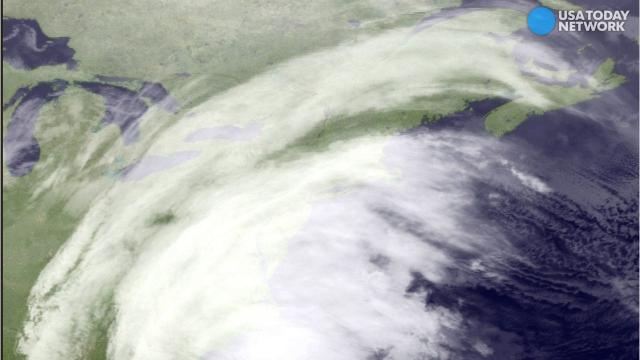 It's that time of year again.

The Weather Channel, as it's been doing for five years, will again name significant snowstorms this winter. It's done to hopefully generate more public awareness and social media buzz about the storms, despite opposition and apathy from rival weather firms (such as AccuWeather) and the federal government.

Heavy, wet snow left by Winter Storm Aiden weighs down the branches of an evergreen tree as traffic passes by along a main thoroughfare Monday, Oct. 9, 2017, in Denver.

But is it a real, useful service, or just a gimmicky marketing ploy? (For better or worse, Winter Storm Nemo is still remembered years later.)

A survey tested the usefulness and impact of winter storm names and found the practice has "little effect on public response or trust in the media."

Adam Rainear, a Ph.D. student at the University of Connecticut, heard of debates within the meteorological community for years, but realized there was no formal, scientific study about the practice. So he decided to conduct one.

The study, involving over 400 college students at the University of Connecticut, is the first peer-reviewed research about this topic.

The researchers presented their subjects with three mock tweets about an upcoming winter storm — either using names like "Bill," "Zelus," or no name at all — then asked them about their perceptions of the storm’s potential severity.

It turned out that the survey participants were equally likely to show concern for the storm regardless of whether common names such as Bill were used, rather than uncommon names, such as Zelus. This was a surprise to Rainear, who thought that more "Americanized" names might make people more wary.

In fact, it didn't even matter if the storm was named or not. Overall, Rainear said the weather community may be "overthinking" the entire issue: People will likely pay attention to the storm regardless of its name, or even if it has one.

The study will appear in the peer-reviewed journal Weather, Climate and Society, a publication of the American Meteorological Society.

More: La Niña is expected this winter. What will that mean for our weather?

This year’s crop of names, for the first time, uses the most popular current baby names, with the first four being Aiden, Benji, Chloe and Dylan. Earlier this month, Winter Storm Aiden brought the first snow of the season to the Denver metro area.

The storm-naming criteria are based on National Weather Service thresholds for winter storm warnings and the number of people in the area expected to be affected by the storm, the Weather Channel said.

Winter Storm Names for the 2017-2018 season have officially been released: https://t.co/RFrXoFsRSU pic.twitter.com/rfiPKh2yIo

Storms will be named if at least 2 million people will be affected and/or if winter storm warnings are expected to be issued for an area of at least 154,000 square miles, which is about the size of Montana.

The survey was admittedly a small sample size of demographically similar people. However, Rainear said the study was an attempt to get the ball rolling for other research on the topic. "We hope to further the discussion and investigation of naming winter storms," the study authors noted.