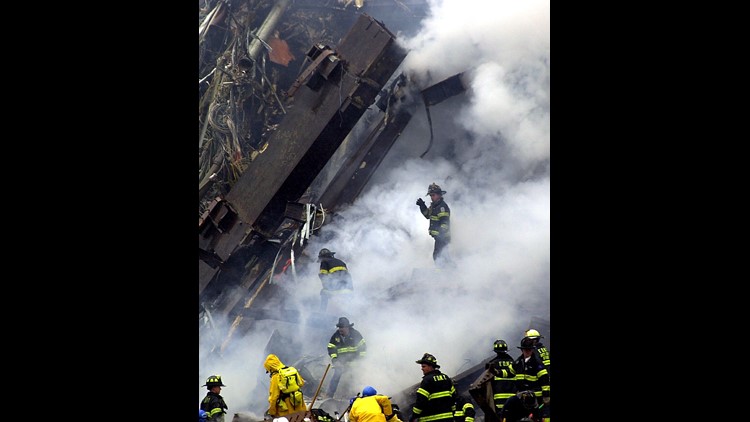 Photo by: Frank Becerra Jr./The Journal News
New York City firefighters work in the burning rubble as they search for victims at Ground Zero on Sept. 12, 2001.

WHITE PLAINS, N.Y. – Seventeen years out from the Sept. 11, 2001, terrorist attacks, nearly 10,000 first responders and others who were in the World Trade Center area have been diagnosed with cancer. More than 2,000 deaths have been attributed to 9/11 illnesses.

It will get worse. By the end of 2018, many expect that more people will have died from their toxic exposure from 9/11 than were killed on that terrible Tuesday.

Robert Reeg of Stony Point, New York, knows the feeling. The retired Fire Department of New York firefighter was seriously injured in the South Tower collapse. In the last 17 years, he's seen fellow first responders who survived the attacks fall victim to the illnesses caused by the contaminants that were spewed all over.

"You lose track, there's so many of them," the 66-year-old said. As for his own health risks, given the growing incidents of cancer among 9/11 first responders, Reeg said he doesn't dwell on it. "It's at the back of your mind. But you can't let it control you."

The average age of a 9/11 first responder is now about 55. While many people face a cancer diagnosis as they age, the rate of some cancers among first responders is up to 30 percent higher than in the general population, Crane said.

The numbers demonstrate the continued loss:

The twisted silhouette of World Trade Center buildings loom above rescue workers at Ground Zero on Sept. 13, 2001.
The Journal News

New Rochelle Fire Department Capt. Barry Nechis spent a month at Pier 94 working on logistics during the recovery effort. He worries about the range of exposure, from those who worked on The Pile, to the people who sifted through debris at Fresh Kills landfill on Staten Island, to the mechanics who worked on dust-laden trucks after they returned to communities that stepped up during the national crisis.

"Oh, it's not going to end," he said. Nechis is registered with the WTC Health Program and said he is "just being monitored."

Specialists in occupational health like Crane can usually calculate what risks a worker faces in a standard workplace setting, depending on chemical exposure. “9/11 was the opposite,” he said during an Aug. 26 interview. “Steel melting, every time (rescue and recovery workers) moved something, a puff of smoke. They didn’t know what they were dealing with, didn’t have the sort of adequate equipment to protect themselves.”

March 19: Ferry captain who evacuated hundreds on 9/11 dies of cancer at 45

Some 90,000 people have reported exposure to toxic chemicals — asbestos, burning jet fuel, burning computer parts, pulverized concrete and myriad other substances. “No one has ever codified or captured all the stuff that was released from that pile,” Crane said. “It’s an unknown exposure.”

A memorial name plate for FDNY Lt. Joseph Stach is seen on the side of a historical FDNY engine at St. Ann's Church in Nyack, Jan. 12, 2018. Stach died from his battle with 9/11 related pancreatic cancer. He retired from the FDNY in 2010 and was also a Life Member of the Empire Hook & Ladder Co. #1 in Upper Nyack.
Mark Vergari/The Journal News

There's been a somewhat expected progression in the kinds of disease seen among first responders. At first, Crane said, people suffered from irritative diseases such as asthma. "You were breathing the air, you were eating the particles."

It takes years, sometimes decades, for cancers to develop from environmental exposures. "We believe that is what’s happening now," Crane said.

Many are sick for years; for others, it comes on fast.

Reeg recalled the loss of Jimmy Lanza, an FDNY member who helped pull 16 people out of the rubble from a collapsed stairwell on Sept. 11. Lanza, who led myriad charity efforts, was diagnosed with brain cancer in November 2016; he died in April 2017 at age 71.

Police stand at attention as the hearse of Yonkers Police Lt.. Roy McLaughlin, 38, passes by after his September funeral. McLaughlin had helped rescue efforts at ground zero after 9/11 and his death, from cancer, was attributed to his work there.
Joe Larese/The Journal News

The wide-ranging latency for cancers – the period between the exposure to a carcinogen and the diagnosis of cancer – adds to confusion in predicting what will happen, when, to an aging first-responder population.

Significantly higher rates of blood cancers, and now kidney cancer, are being diagnosed among first responders. When will the tide turn?

"I don't think we have reached 15 percent of the cancer we're going to see," said Dr. Ray Basri, an internist and Middletown, New York, volunteer firefighter who is also a professor of medicine at New York Medical College in Valhalla. "I really do think we're in the very early stages."

As first responders sought help for respiratory diseases and other illnesses in the first few years after 9/11, the general consensus was that their exposure at ground zero was a possible factor, but not a clear determinant.

Basri, who was the first physician at the scene of the South Tower collapse, said that a 2-inch-thick "moon dust" covered the area. As the rescue and then recovery continued, that toxic dust was stirred up with every move. "The number of people exposed was huge."

September 2017: An oasis of kindness on 9/11: This town welcomed 6,700 strangers amid terror attacks

It took a class-action suit, by White Plains attorney David Worby, to fill in the blanks about possible cancer risks from the ground zero cleanup. Worby started doing his own research when he couldn't find any.

"I went and wrote the medical paper with only Google support because no doctor was saying these guys had pre-existing exposures," Worby said in a 2016 interview. He said few bought into his theory at the time.

FDNY Lt. Harry Wanamaker of Upper Nyack, left, with Welles Crowther in front of the World Trade Center on June 20, 2001. Crowther died Sept. 11, 2001. Wanamaker, who worked on the rescue and recovery at ground zero, died in 2010.
SUBMITTED/Crowther family

The skepticism back then was significant enough to stall the passage of the James Zadroga 9/11 Health And Compensation Act, initially introduced in 2006, until 2010. The legislation, which re-established a Victims Compensation Fund and set up health-care and health-tracking programs, first focused on respiratory ailments suffered by responders. By 2013, some 50 cancers were included in Zadroga coverage. In 2015, amid a new awareness of the ongoing health crisis facing first responders, the bill was extended through 2090.

Basri, who went back to ground zero on Sept. 13, 2001, said he decontaminated himself afterward. But others dragged that dust home. "It's plausible that there could be an extension to (other) people as well."

Crane said that health centers like the Mount Sinai program can offer more frequent screenings for things like lung, cervical and colon cancers for first responders, now that they better understand the risks. Radiologists can look for early markers of a tumor and track those cases closely. "We'll have guys with exposure come back earlier," Crane said.

The Mount Sinai WTC Program has been working with major cancer centers to develop testing protocols that better fit people at risk because of their environmental exposure. But, Crane said, doctors need "to balance early detection and over-diagnosis of disease."

The research among first responders also will impact cancer treatment in general. "The science of it is still developing," Crane said.