Florida school shooting: What we know about the attack 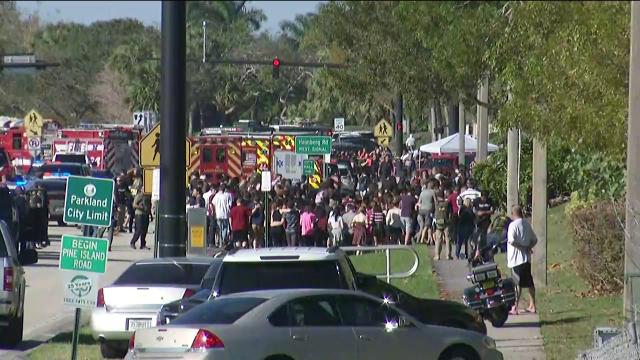 A former student went on a shooting rampage at Marjory Stoneman Douglas High School in Parkland, Fla., on Wednesday afternoon in one of the deadliest high school shootings in modern American history.

Here's what we know:

Credit: South Florida Sun-Sentinel via AP, Getty Images
People are brought out of the Marjory Stoneman Douglas High School after a shooting.

How many were killed and injured?

At least 17 people were killed and 14 were injured and taken to local hospitals, officials said.

A sheriff said the bodies of 12 of the dead, including a beloved coach and security guard, Aaron Feis, who stepped in front of one spray of bullets to protect his students, were found inside the building.

Three more were killed just outside the school and another two died of their injuries after being taken to the hospital, Broward County Sheriff Scott Israel said. The victims included both students and adults.

1 / 5
WPLG-TV via AP
In this frame grab from video from WPLG-TV, students from the Marjory Stoneman Douglas High School in Parkland, Fla., evacuate the school following a shooting.

Who is the gunman?

Authorities identified the gunman as Nikolas Cruz, 19. Cruz was a former student at Marjory Stoneman Douglas High School, but had been expelled for fighting and did not graduate, authorities said.

The gunman was arrested a short distance from the high school near a home, a law enforcement official not authorized to comment publicly told USA TODAY.

He was booked into Broward County Jail Thursday morning on charges of premeditated murder in the killing of 17 students and faculty at a Florida high school. He made his first court appearance Thursday afternoon where Judge Kim Theresa Mollica ordered he be held without bond.

Cruz was known for dark personality

At least one teacher said he had been flagged as a potential threat and that he was a big enough concern that administrators had banned Cruz from campus.

Jim Gard, a math teacher at Marjory Stoneman Douglas High School, said Cruz had been aggressive towards students in the past.

A former classmate, Jillian Davis, said Cruz had a hot temper and a history of making dark, gun-related jokes.

After Cruz’s mother died Nov. 1, he moved in with a friend’s family in northwest Broward around Thanksgiving, the family’s lawyer, Jim Lewis, told AP. The family was aware of the AR-15 and made him keep it locked in a cabinet, but he had a key, he said.

How did the attack unfold?

Cruz came to the school bolstered by a gas mask, smoke grenades and multiple magazines of ammunition and a semi-automatic weapon.

Broward County Public Schools reported the shooting began near dismissal time and police say Cruz began the rampage outside before entering the school.

He triggered a fire alarm in a building that normally serves freshmen students, then roamed the schools' corridors — from the first floor to the third — opening fire on students pouring into hallways.

Cruz was at large before being taken into custody roughly two hours after the shooting.

More: Florida school shooting is the 6th to injure students this year

More: 20 years in, shootings have changed schools in unexpected ways

Cruz is a troubled teenager who posted disturbing material on social media before the shooting spree, according to a law enforcement official and former schoolmates.

Broward County Mayor Beam Furr said during an interview with CNN that the shooter was getting treatment at a mental health clinic for awhile, but that he hadn’t been back to the clinic for more than a year.

“It wasn’t like there wasn’t concern for him,” Furr said.

“And some of the things that have come to mind are very, very disturbing,” he added without elaborating.

Daniel Huerfano, a student who fled Wednesday’s attack, said he recognized Cruz from an Instagram photo in which Cruz posed with a gun in front of his face.

How did President Trump Respond?

In an televised address to the nation Thursday, President Trump called the Florida school shooting a moment of "hatred and evil."  Trump announced that he plans to visit Parkland, Fla. to meet with family members and officials.

“No child, no teacher should ever be in danger in an American school. No parent should ever have to fear for their sons and daughters when they kiss them goodbye in the morning,” Trump said.

The speech came about 2 hours after the President issued a proclamation honoring the victims and ordering the American flag to be flown at half-staff at the White House and all public buildings and grounds.

Earlier Thursday, Trump also tweeted his "prayers and condolences,” saying that there were "so many signs" that the shooter was "a big problem."

So many signs that the Florida shooter was mentally disturbed, even expelled from school for bad and erratic behavior. Neighbors and classmates knew he was a big problem. Must always report such instances to authorities, again and again!

More: 'No child, no teacher should ever be in danger in an American school,' Trump says after Florida shooting