In a case about a cake, Supreme Court justices raise constitutional and culinary questions 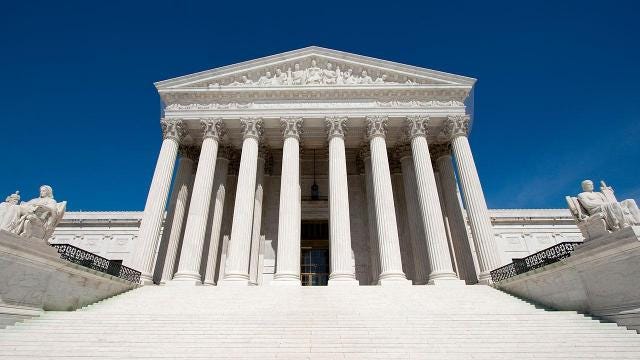 Is a custom-made cake first and foremost a dessert? Or a form of expression?

If a religious objector won't design a cake for a same-sex couple, does he have to sell one off the shelf?

Those were among the difficult questions posed by nine Supreme Court justices Tuesday as they wrestled with the case of a Colorado baker who turned away two gay men in search of a wedding cake.

Here's a sampling of those queries, both constitutional and culinary:

When a cake is featured at a wedding, who is speaking?

Kristen Waggoner, the lawyer representing "cake artist" Jack Phillips, likened him to a painter or a sculptor. But Justice Ruth Bader Ginsburg said at most ceremonies, "the speech is of the people who are marrying, and perhaps the officiant."

Justice Anthony Kennedy said the question could be tougher to answer if a particularly "complex cake" required the baker or an assistant to attend the celebration, "so you cut it in the right place and the thing doesn't collapse."

What is the predominant purpose of the cake, to be seen or eaten?

Justice Sonia Sotomayor asked Waggoner if the high court had ever "given protection to a food," noting that "the primary purpose of a food of any kind is to be eaten."

"There are sandwich artists now," Sotomayor said. "There are people who create beauty in what they make, but we still don't call it expressive and entitled to First Amendment protection."

U.S. Solicitor General Noel Francisco said when something is "part art and part utilitarian," you go with the dominant feature.

"People pay very high prices for these highly sculpted cakes, not because they taste good but because of their artistic qualities," he said.

To which Justice Neil Gorsuch added, "I have yet to have a wedding cake that I would say tastes great."

If a baker can be exempted from serving same-sex weddings, who else can?

This question helped the court's liberal justices mount a case against Phillips. If a baker deserves a break based on freedom of expression, they said, how about florists, jewelers, engravers, hair stylists and makeup artists?

When Waggoner drew the line at hair stylists and makeup artists because their work product isn't speech, Justice Elena Kagan said, "Some people may say that about cakes, you know?"

If same-sex weddings trigger an exemption from anti-discrimination laws, what about other events?

Liberal justices said the wedding exception could be extended to anniversaries, bar mitzvahs, reunions and funerals. When Kagan raised the prospect of a "great restaurant" refusing to serve a same-sex couple, Francisco said that wouldn't be a form of speech.

"So the baker is speech, but the great chef who is like, everything is perfect on the plate and it's a work of art, it is a masterpiece?" she asked.

"My colleagues, I think, go to more elite restaurants than I do," Justice Samuel Alito deadpanned.

If Phillips loses the case, who else could be forced to "speak" against their will?

Chief Justice John Roberts said Catholic Legal Services might be forced to represent a gay couple in a marriage case, despite opposition to same-sex marriage. Alito said a religious college with similar objections might have to host same-sex weddings or offer married student housing to same-sex couples.

Gorsuch went so far as to suggest that if a baker designed a cake for the Red Cross with an actual red cross, he might have to do the same for the Ku Klux Klan.

"The Ku Klux Klan as an organization is not a protected class," Cole responded.

How might a ruling on sexual orientation affect other protected classes, such as race and gender?

Liberal justices repeatedly warned that a ruling in Phillips' favor could open the door to other forms of discrimination, including against African Americans.

"Race is different," Waggoner responded. "That objection would be based to who the person is, rather than what the message is."

Conservatives also used race to make their argument in favor of Phillips' free-speech exemption. Francisco, arguing for the federal government, equated forcing Phillips to design a same-sex wedding cake with forcing "an African American sculptor to sculpt a cross for a Klan service."

What about that cake off the shelf?

Waggoner contended that Phillips would have given Charlie Craig and David Mullins a cake off the shelf for their wedding. But several liberal justices disputed that, and even Roberts doubted its accuracy.

"If he is required to sell a cake in the window with the message already on it, that is compelling him to associate that message with the ceremony," the chief justice said. "I thought that was something to which you objected."