'This Is Us' cuts Spacey reference in tonight's show

Career fallout continues for Kevin Spacey after actor Anthony Rapp accused the Oscar winner of making advances on him when he was 14 years old.

Rapp, 46, a Broadway veteran, now seen in Star Trek: Discovery, told BuzzFeed that the House of Cards star, then 26, pushed him down on a bed during a party in 1986 and climbed on top of him. Rapp says he left before the encounter went any further.

Many in the entertainment and LGBTQ communities were outraged that Spacey combined his coming out and mea culpa statements, saying it furthered the conflation of homosexuality and pedophilia.

'This Is Us' cuts Spacey reference in Tuesday's episode

Tuesday night's trick-or-treating episode of the popular NBC drama made a hasty change before hitting the airwaves. In one flashback scene, Justin Hartley's character, Kevin, is seen as a struggling actor in 2008. He is further depressed when an actor friend comes over and exuberantly announces, “I just got a part in a Kevin Spacey movie!”

That line has been cut from the episode. "In light of recent events, the producers have decided to remove the brief reference to Kevin Spacey," read a statement sent by 20th Century Fox Television rep Chris Kaspers.

A Mexican actor is saying Kevin Spacey fondled or tried to fondle him against his will while Spacey was leading the Old Vic theater in London, reports the Associated Press.

"Those of us who were around him at the Old Vic Theater in London know that a lot more people will come forward with their stories in the coming days and weeks," Roberto Cavazos wrote in a Facebook post.

Cavazos declined AP's request to be interviewed on the subject. Spacey's media representative did not immediately respond to a request for comment. Spacey was artistic director of the theater from 2004 to 2015.

"It was more common for this guy, when he was in the bar of his theater, grabbing whoever caught his attention. That's the way it happened to me the second time," Cavazos wrote. "I didn't stand for it, but I know some people who were afraid to stop it."

It was not clear when the alleged incidents happened, but the AP notes that Cavazos' resume lists two credits at the Old Vic, in 2008 and 2010.

'House of Cards' shuts down production 'until further notice'

A day after announcing that Spacey's political drama House of Cards will end after the upcoming sixth season, producers said they're shutting down production for the time being.

“(Media Rights Capital) and Netflix have decided to suspend production on House of Cards Season six, until further notice, to give us time to review the current situation and to address any concerns of our cast and crew," Netflix representative Karen Barragan told USA TODAY in a statement. 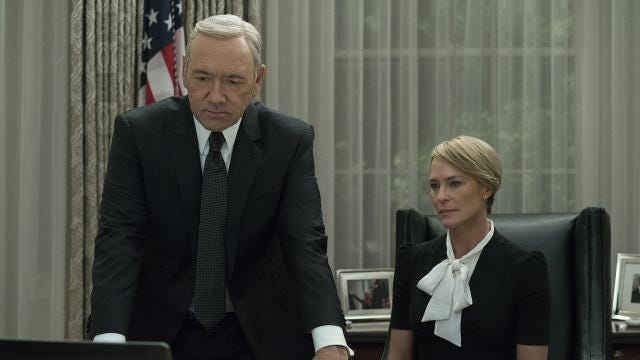 Actress Susan Sarandon told Access Hollywood that Kevin Spacey erred with his statement by trying to "mix the idea of pedophilia and homosexuality as if they had anything to do with each other."

Sarandon, who was doing interviews at the Monday premiere of A Bad Moms Christmas, continued, "To even divert attention away from the story by coming out — which wasn't that big of news anyway, honestly — I just think that's a very dangerous place to go. It's not right."

The Old Vic theater in London released a statement saying it was "deeply dismayed" by the allegations made against Spacey.

"The Old Vic would like to respond to recent media reports by making it clear that we are deeply dismayed to hear the allegations levied against Kevin Spacey, who was Artistic Director from 2004–2015," the theater said in a statement posted on Twitter.

"Inappropriate behavior by anyone working at The Old Vic is completely unacceptable. We aim to foster a safe and supportive environment without prejudice, harassment or bullying of any sort, at any level ... We want our employees to feel confident, valued and proud to be part of The Old Vic family. Any behavior we become aware of which contravenes these goals will not be tolerated."

The theater also announced it had established a confidential email address for complaints, noting: "Any experience shared will be treated in the utmost confidence and with sensitivity. We have appointed external advisors to help us deal with any information received."

Despite the backlash against Spacey, Sony is not moving the release date for his next film, All the Money in the World, due Dec. 22.

The film is still scheduled to open on its original release date, according to a person familiar with the situation but unauthorized to comment, and AFI Fest spokeswoman Shari Mesulam confirmed to USA TODAY the film will continue to hold their closing gala spot at the festival on Nov. 16.

Directed by Ridley Scott, All the Money in the World tells the story of the 1973 kidnapping of teenager John Paul Getty III (Charlie Plummer, Boardwalk Empire), the grandson of oil billionaire Jean Paul Getty (Spacey). and the campaign by the boy's mother (Michelle Williams) to convince the elder Getty to pay the ransom.

On Monday, the International Academy of Television Arts and Sciences said that "in light of recent events" it would no longer honor Spacey with the 2017 Emmy Founders Award.

The Academy had planned to present Spacey with the award, which was given to Shonda Rhimes last year, in November at the International Emmys ceremony in New York.

1 / 38
ANDY RAIN, EPA-EFE
epa06297780 (FILE) - US actor Kevin Spacey watches a match during the Aegon Tennis Championships at the Queen's Club in London, Britain, 12 June 2013 (reissued 30 October 2017). In a statement posted on Twitter on 29 October 2017, Spacey has apologized to US actor Anthony Rapp, who had accused Spacey of acting sexually inappropriate towards him when he was 14. In the same post, Spacey said he chose 'now to live as a gay man'. EPA-EFE/ANDY RAIN ORG XMIT: ARA3

More: Who is Anthony Rapp?

Related: Here's why Kevin Spacey isn't likely to be in legal trouble