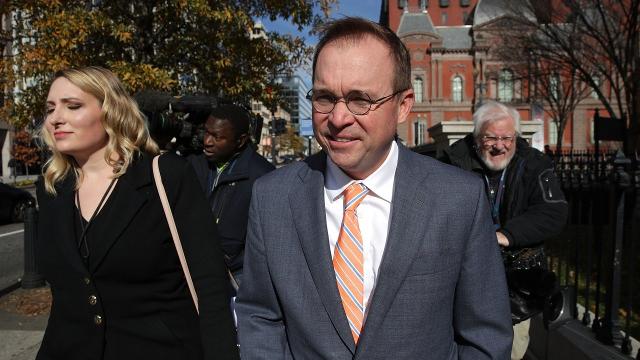 Campaign contributions he received from businesses while serving in Congress won't pose any conflicts with his leadership at a consumer watchdog, federal budget director Mick Mulvaney said Monday.

The declaration came as Mulvaney outlined policy and enforcement shifts he's weighing while serving as acting director of the Consumer Financial Protection Bureau, including a different position on the watchdog's new payday lending rule.

"It's not at all unusual for a new administration to change positions on various policies," Mulvaney said during an afternoon briefing with media reporters. "This place will be different ... than it was under Mr. (Richard) Cordray," who resigned as the bureau's director late last month, he added.

While serving as a Republican House member from South Carolina, Mulvaney criticized the consumer bureau rule that requires providers of payday loans, auto title loans, and other small-dollar advances to determine in advance whether borrowers can afford to repay the debts.

The rule, which requires compliance as of August 2019, also limits lender efforts to debit borrowers' checking accounts, a practice that imposes extra fees.

Payday lenders gave $31,700 in 2015-16 federal campaign cycle contributions to Mulvaney, ranking him ninth among all congressional recipients from the sector, according to data analyzed by the Center for Responsive Politics.

Asked whether the contributions influenced his position on the rule and could pose a conflict of interest, Mulvaney said, "I don't think so, because I am not in elected office anymore." He added that he had no plans for any future political races.

A payday lending organization plans to file a lawsuit against the consumer bureau, arguing that the rule exceeded the watchdog's constitutional and statutory authority and would cause arbitrary harm to lenders and borrowers, USA TODAY reported last week.

Mulvaney said he would not comment on current or potential lawsuits against the consumer bureau.

However, he welcomed Friday's announcement that some House Republicans and Democrats had introduced a measure aimed at using the Congressional Review Act to repeal the payday lending rule under the CRA. Congressional approval and signing by President Trump could make the industry group's lawsuit plan unnecessary.

"I would support the Congress moving forward with the CRA," said Mulvaney.

The Republican-controlled Congress previously used the same roll-back process to nullify a rule that would have enabled consumers to resolve disputes with banks, credit card issuers, and other financial service providers by joining class-action lawsuits against the companies. Consumers typically are required to pursue such disputes through individual arbitration proceedings.