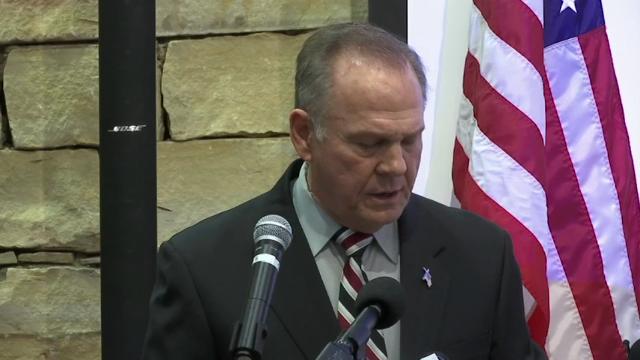 A convergence of electoral results, polling and unsettling allegations against a Republican Senate candidate should have conservatives worried about their party’s future. Nothing short of Democratic control of Congress and the success of Donald Trump’s presidency is at stake.

In Alabama, an accused pedophile is the Republican Party’s nominee for a U.S. Senate election on Dec. 12. Roy Moore's campaign was rocked last week by credible, well-sourced reporting that he sexually molested a 14-year-old girl in 1979 — and rocked again Monday by Beverly Young Nelson, who accused him at a press conference of trying to force her to have sex when she was 16.

Trump and other national GOP leaders preferred Sen. Luther Strange over Moore. But Moore, unfortunately, won the primary to replace Jeff Sessions and presidential intervention is required to save the Republican Party from one of two bad outcomes: Moore wins, plunging the Senate GOP into immediate turmoil; or Moore loses, reducing the Senate GOP to a one-vote majority after giving away a reliable seat.

President Trump should intervene with the following plan: demand the Alabama Republican Party withdraw Moore’s name as a candidate, which it almost certainly would do if ordered by the White House; dispatch a still-popular Sessions to run a write-in candidacy; and campaign for and hope Sessions wins.

In that scenario, if a disqualified Moore receives the most votes, the election is voided and a new one is scheduled. It’s a no-lose plan for Trump, plus he can then choose a new attorney general that he doesn’t hate so much.

Trump has no relationship with Moore; he spoke to him for the first time on Sept. 27. There are no guarantees that Moore supports Trump’s agenda. Win or lose, Moore has already wrought horrible damage to the Republican — and therefore Trump’s — brand. Trump tosses people under the bus all the time for far less; ask Ed Gillespie, who found himself beneath the wheels minutes after losing the Virginia gubernatorial race last Tuesday.

Moore is embarrassing Trump, and the president should rid himself of this brand anvil. There are over 1 million Republicans in Alabama, and virtually any of them could be elected to the U.S. Senate. Can’t we pick one who isn’t accused of pedophilia, or of creepily hanging out at “high school football games and the mall” to pick up high school girls while in his 30s?

Snap polling conducted in the wake of the allegations show the race tied. Some pundits have suggested that Moore might yet recover his previous lead, as Alabamans would rather stick it to the establishment than trust The Washington Post.

But salvaging Moore’s candidacy doesn’t make it right, and President Trump can lead the Republican Party down a better path by using his political influence to prod the Alabama GOP to a good decision. It wasn’t that long ago that a Republican president (George W. Bush) forced a Senate majority leader (Trent Lott) out of his leadership position for making a dumb, insensitive remark at a 100-year-old man’s birthday party – a good template for today’s far worse situation.

Some have argued a presidential intervention would be hypocritical, as Trump himself has faced allegations of crude sexual behavior. But Trump was never accused of pedophilia, for goodness sakes. The Moore revelation drew comparisons to Trump’s Access Hollywood tape but, beyond their emerging in close proximity to a general election, the moments are quite dissimilar.

Licentiousness isn’t the same as pedophilia. If fear of hypocrisy is enough to paralyze a president (or any politician, for that matter), our entire political leadership might as well go into a soundproof bunker, never to be heard from again.

More: The day of the Sutherland Springs massacre, I went to buy a gun. I got a lesson instead.

POLICING THE USA: A look at race, justice, media

Already, Trump’s dumbest defenders are slamming Leigh Corfman, the accuser who was 14 at the time of the alleged encounter, of having multiple marriages and bankruptcies. These conditions no more disqualify Ms. Korfman from telling her story than do they a New York City businessman from ascending to the Oval Office.

Republican midterm prospects and Trump’s own re-election viability hang in the balance. Reuters released a survey this week showing, among other things, that 85 percent of Trump voters would do so again. Trump cannot afford to lose 15 percent of his 2016 take and expect to be re-elected.

After what happened in the Virginia suburbs last week, where a turnout surge propelled Democrats to a sweeping victory (albeit, as Kyle Kondik points out, among an electorate “hostile” to Trump), Republicans should think hard about what failing to shun Moore would signal to women and college-educated whites. Gillespie was certainly running uphill in a blue state, but exacerbating the GOP’s problems with suburban voters by dying on Moore’s Hill would be galactically stupid. It’s not worth it and puts GOP congressional majorities in danger. Only Hillary Clinton’s flawed candidacy saved the GOP from women voters in 2016, and she’s not running again.

While Democrats still have much to prove if they wish to turn today’s political atmospherics into a 2018 wave, Republicans may transform a tornado watch into a full-blown warning if they stick with candidates like Roy Moore. Trump can put a stop to it right now by zigging when everyone thinks he’s going to zag.

It’s never the wrong day to do the right thing.

Scott Jennings is a contributing columnist for the Courier Journal, where this piece first appeared. Follow him on Twitter: @ScottJenningsKY

You can read diverse opinions from our Board of Contributors and other writers on the Opinion front page, on Twitter @USATOpinion and in our daily Opinion newsletter. To respond to a column, submit a comment to letters@usatoday.com.