Rare Grateful Dead memorabilia to be auctioned in Reno 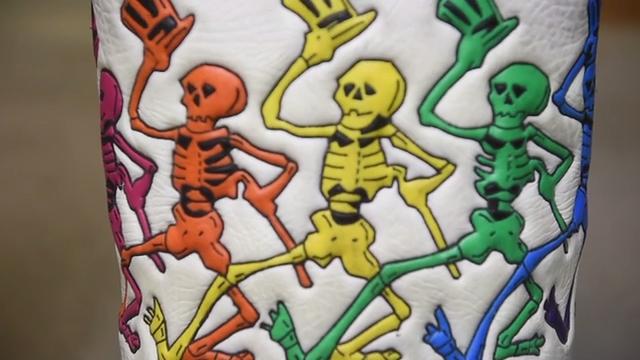 RENO — Like most Deadheads, Jesse Kant can remember her favorite Grateful Dead concert like it was yesterday.

"Without any doubt, that was the show at the Great Pyramid in Egypt. The show was obviously outdoors and the people actually came to the show on camels; some people sat on their camels and watched," Kant said. "And that night, there was an eclipse of the moon, and the children were running through the streets banging pots and pans trying to scare away the shadows. By far, my favorite show."

But most Deadheads didn't get to hang out with the band after the show, most didn't get letters from the band members in later years or get invited to Jerry Garcia's wedding nearly two decades later.

More than 100 items from a rare collection of Grateful Dead memorabilia are going on an online auction block from Nov. 22 through Dec. 9 thanks to Kant, wife of the late Hal Kant, the Grateful Dead's attorney, whom the band lovingly called the "Czar of the Dead."

Since the late 1980s, the Kant family called the Reno area home. After Hal died in 2008, Jesse held on to dozens of treasures, including a 1968 Kings Beach concert poster when tickets were $3.50 at the door; art prints signed by Garcia and a unique, colorful set of banners used as the backdrops for 88 concerts around the world. Individually, some of the treasures are expected to go for as much as $100,000, maybe more.

"I’ve often wondered about that, why they're so loved. They’re such a strange and interesting phenomenon," said Jesse, who recently moved to the Pacific Northwest and entrusted her possessions to Stremmel Auctions of Reno before she left. "I really couldn’t say except that it was during the time where drugs were a very large part of that culture. The music was always different, they didn’t play a set routine, but I really couldn't tell you why Grateful Dead fans are fans. It’s a very personal thing."

Hal, who represented everyone from Janis Joplin to Sonny and Cher, served primarily as counsel for the Dead, considered the titans of tie-dye and pioneers of psychedelic jams. The attorney was one of the first lawyers in the 1960s to represent the artists instead of the industry.

"He went to Harvard, grew up in the Bronx, he worked in the music industry and he saw that no one was going to bat for the artists," said Hudson Stremmel, spokesman for Stremmel Auctions. "He was responsible for keeping (the band's) copyrights" and introduced guitarist Garcia to the makers of Ben and Jerry's ice cream; their partnership resulted in Cherry Garcia.

Hudson Stremmel poses for a portrait in front of some artwork that was used during Grateful Dead concerts in the 1980's at Stremmel Auctions in Reno on Nov. 9, 2017.

The band members were close with Hal. They used to cheer on Hal, a World Series of Poker champion, during card games and gave him many one-of-a-kind tokens of gratitude. A letterman jacket with embroidered stitching reading, "Many Thanks from Grateful Dead, Hal" and two "LimitDead Edition" golf bags, one signed by Alice Cooper, are just a few of the items for purchase.

Hal also loved skiing, so another auction piece is two sets of unused Grateful Dead skis, both decorated with the trademark skulls and roses that often appear on their official merchandise.

"It's amazing. It's kind of a story of his life that hasn't been told," Stremmel said of Hal Kant. "A lot of times, people just don't know what to do with their assets, so (Jesse) just called us."

The collection is one of the rarest that the auctioneer family ever has seen, Stremmel said, walking around the dated wood-paneled space in Shopper's Square mall where the items are being stored in. Usually, the business deals with high end estate sales and bankruptcy cases.

"It is kind of odd because people are going to Tuesday Morning or going to get their nails done (in the mall), and then they walk by and they're like, 'What's this?'" Stremmel said.

Also included in the auction is a wide range of art by Jan Sawka, a Polish refugee whose artwork was greatly admired by the Kants. Sawka created the bright color-blasted canvases that hung in the back of the Grateful Dead's 25th anniversary tour. He also created the working telephone booth, covered in artistic collage, that Garcia supposedly used, though Jesse said she does not recall him using the phone often.

"My impression of Jerry — music aside — he was an extremely intelligent man, not just with music. He was interested in physics, a man with a very open mind," said Jesse, who prefers not to tell her age but is in her eighth decade of the long, strange trip called life.

Jesse did keep some Dead valuables, including some Sawka originals and letters from members of the band, but she's saying goodbye to her and Hal's backstage passes and her living room replica of the Dead’s conference table, complete with hand-carved skulls and ornate "GD" signatures on each chair.

She's also parting with a wedding invitation from Garcia and his wife, Deborah Koons, as well as a framed, dried rose from the couple's wedding the year before his death.