Rep. Scalise returns to the field for congressional baseball game a year after shooting 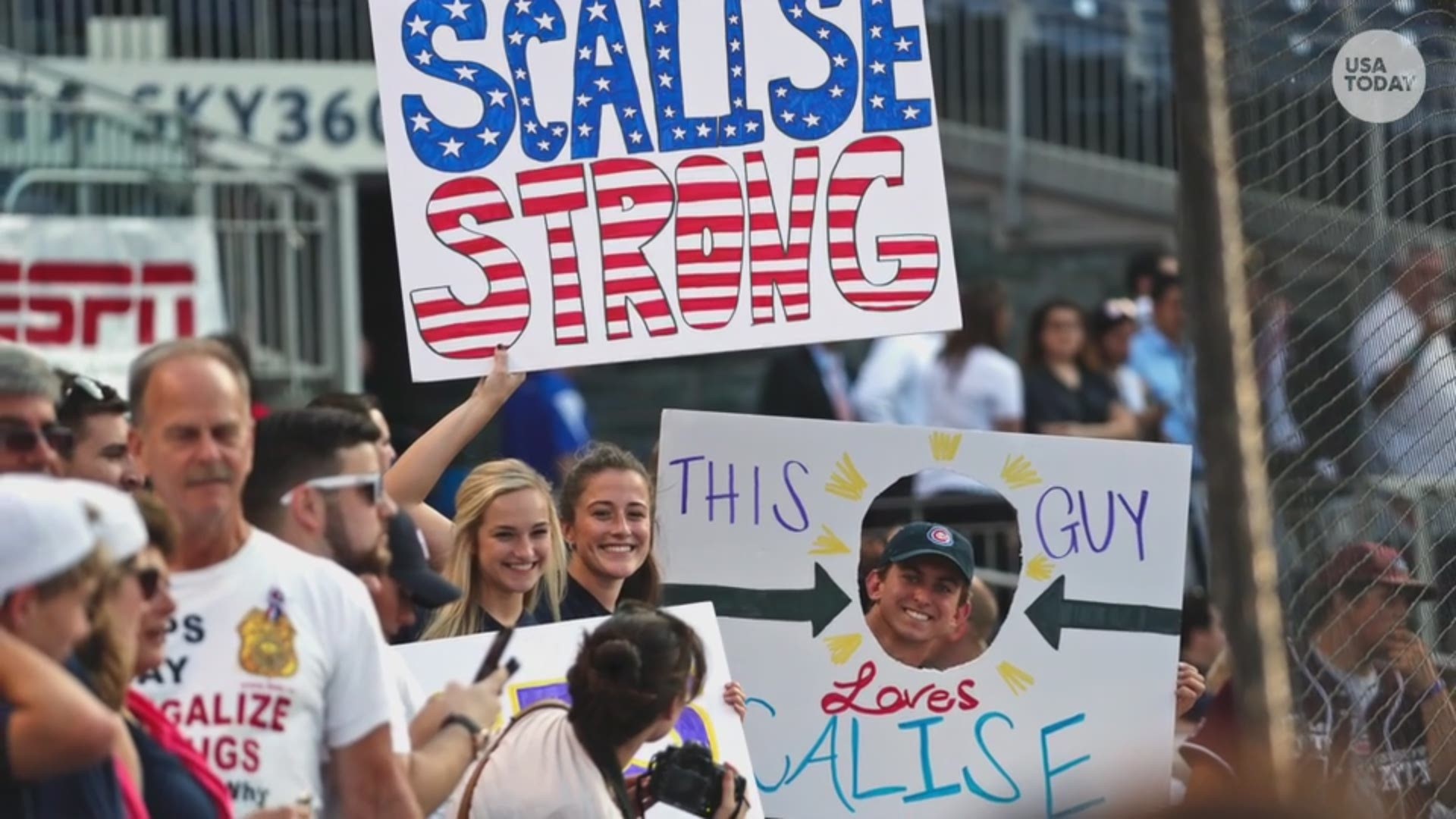 WASHINGTON — It never crossed Steve Scalise’s mind that he wouldn’t someday return to the field to play in the Congressional Baseball Game for Charity.

Credit: Jack Gruber, USA TODAY
House Majority Whip Rep. Steve Scalise was nearly killed while practicing for the congressional charity baseball game one year ago. The Louisiana Republican plans to show up at National Stadium Thursday to cheer on his colleagues in the annual showdown against the Democrats. S

Never mind he had to undergo at least nine surgeries. Or that he had to whiz around the U.S. Capitol on a motorized scooter. Or that he still uses two crutches to get around.

Scalise returned to the field Thursday for the annual game, a friendly bipartisan event that got its start in 1909.

“I wanted to get back there for a lot of reasons,’’ Scalise said from his office just hours before the first pitch. “I love playing. I love the camaraderie. But after the shooting I didn’t want people to think that you could give in to fear. To me, in a lot of ways, it’s like closing another chapter.”

Scalise and dozens of Republicans and Democrats were eager to take to the field at Nationals Park, home of the Washington Nationals. It has been a long year since the shooting that shattered a sense of security for lawmakers on Capitol Hill.

Last June, a gunman opened fire on GOP lawmakers practicing for the game on a field in Alexandria, Va., across the Potomac River from D.C. The gunman hit Scalise and wounded three others.

Capitol Police special agents Crystal Griner and David Bailey, who were assigned to protect Scalise, killed the gunman and are credited with saving the lives of dozens of other lawmakers.

Scalise had predicted a GOP win, but Republicans took a beating, 21-5.

It was still a victory for most on the field.

Scalise, the majority whip and third ranking member of the House, not only planned to return to the diamond Thursday night, but planned to take his starting spot at second base.

He wasn’t sure how long he would be able to stay in the game — another player would be standing by in the dugout to replace him. After all, Scalise is still recovering. His movement is limited.

But just stepping on the field, he said, would be emotional.

Scalise got a standing ovation when he took to the diamond and started off the game fielding a grounder to second.

The crowd went wild. His GOP teammates left their bases to run up and hug Scalise. It was a bipartisan moment of joy. Democrats cheered as well.

A few pitches later, Rep. Cedric Richmond, a Democrat from Louisiana and a close friend, helped escort Scalise off the field. He walked off to another standing ovation.

Earlier in his office, Scalise said there was a lot of symbolism in the teams playing on June 14, the anniversary of the shooting.

“It’s important for all of us to show that a year later we’re all coming back and the game's going to be emotional and exciting," he said. “For me, this was something that I really worked toward and looked forward to the opportunity to come back out on the ball field. There were times when I wasn’t sure I was going to be able do something like that."

Scalise didn’t make it to the ballpark last year. He was in the hospital fighting to stay alive. He returned to work at the Capitol last fall.

Hours before the game Thursday, Scalise said, "It’s amazing to think that that brutal act took place a year ago today. And that everyone survived…," he said. “That’s God’s hand at work."

In the corner of his office in the Capitol, a yellow Louisiana State University Tigers jersey hung on a cabinet. Scalise, an LSU graduate, had sported the jersey for recent practices, including when he broke ranks and visited the rival Democrats' practice.

But for Thursday's game, he decided to swap the LSU jersey with a 2017 World Baseball Classic jersey emblazoned with giant USA lettering across the chest.

He also sported a Capitol Police cap in honor of the special agents.

At the start of the game, the crowd saluted Griner and Bailey along with others injured last year — congressional aide Zachary Barth and lobbyist Matt Mika.

I’m back in the game. pic.twitter.com/zs9xsiPd8p

Over this past year, Scalise has repeatedly touted how his faith has helped him through.

He prayed when he was laying injured on the field that morning.

Throughout the day Thursday, Scalise said he had been talking smack with his rival —  Richmond, the star pitcher for the Democrats and the only Democrat in the Louisiana delegation. He was one of the first to arrive at the hospital last year to check on Scalise.

The next day, Richmond led the Democrats to victory last year.

Scalise hopes to one day get back up at bat and hit one of Richmond’s pitches. Their rivalry is still on.

“Until he switches to Republican and he starts for us, there’s going to be a strong rivalry," he said.

A record number of spectators showed up for last year’s game. They came sporting LSU gear and signs of support.

By the top of the third inning Thursday, the stadium started to fill up.

“To have a large crowd, it just shows you that people do want to have events like this to bring people together and it does," Scalise said, adding that it raises money for local charities. In fact, last year, the game raised $1.5 million for organizations such as the Boys and Girls Clubs of Greater Washington, The Washington Nationals Dream Foundation and The Washington Literacy Center.

Theresa Breakiron, who came to the game last year, returned Thursday to see how Scalise was doing and to support him.

"I think his faith in God helped him get through this,'' she said. "He's a man of faith. It shows you the power of prayer."

Earlier Thursday, dozens of lawmakers and congressional staffers responded to Scalise’s plea to join him in another comeback of a sorts by stretching out their arms to donate in the annual Congressional Blood Drive.

Organizers from Inova Blood Donor Services had hoped to get 200 people to show up for the event in the rotunda of a House office building — like they did after the shooting.

Rep. Susan Brooks, a Republican from Indiana, missed last year’s blood drive, but was determined to show up this time.

“When they said they were doing this again, I thought, ‘I need to do this for Steve Scalise and all for all the people' injured, said Brooks, as her blood was drawn.

She noted that Scalise, who lost a lot of blood when he was shot, credited similar donations with helping to save his life.

“I know there are so many people who need blood,’’ Brooks said. “It’s a good thing to do."

In between talks about the opioid crisis and immigration, Scalise spent much of the day talking about returning to the field with his congressional colleagues.

“I never get tired of talking about how good things are right now and how far we’ve come….,’’ he said. “It could have been a much different story.’’

It's more than a game. pic.twitter.com/Obltwoeu2U