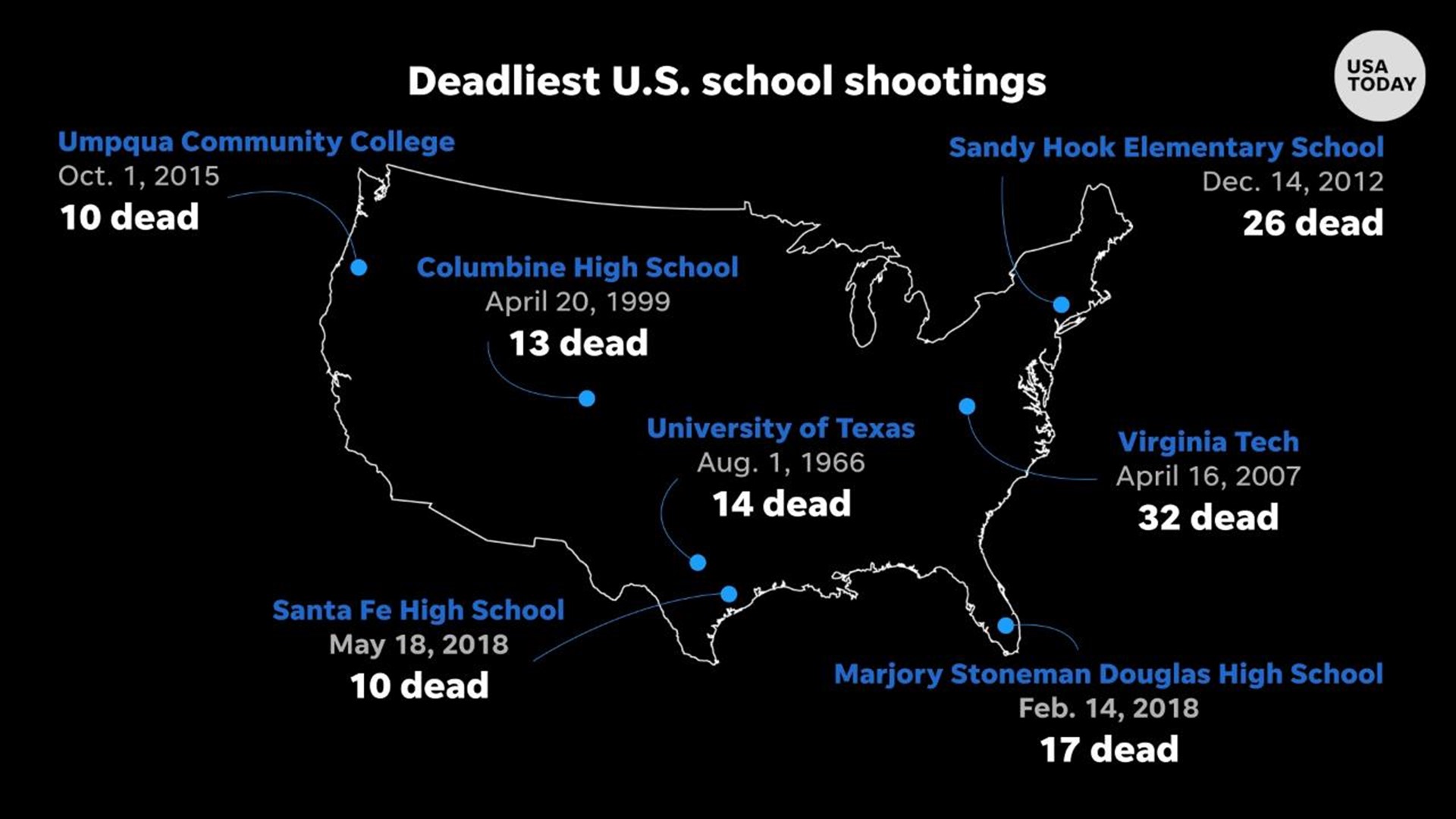 "This has been going on for too long in our country, too many years, too many decades now," President Trump said Friday when he learned that a gunman had opened fire at Santa Fe High School outside Houston.

Few Americans would disagree that shootings like the one Friday in Texas have become too common. But as politicians and law enforcement officials scramble for answers, the shootings and bodies continue to pile up.

Santa Fe was at least the 20th incident of 2018 in which someone was injured with a firearm on the campus of an U.S. school. At least 10 people were killed at Santa Fe High School on Friday.

Here is a list of the other 19 shootings at schools this year: 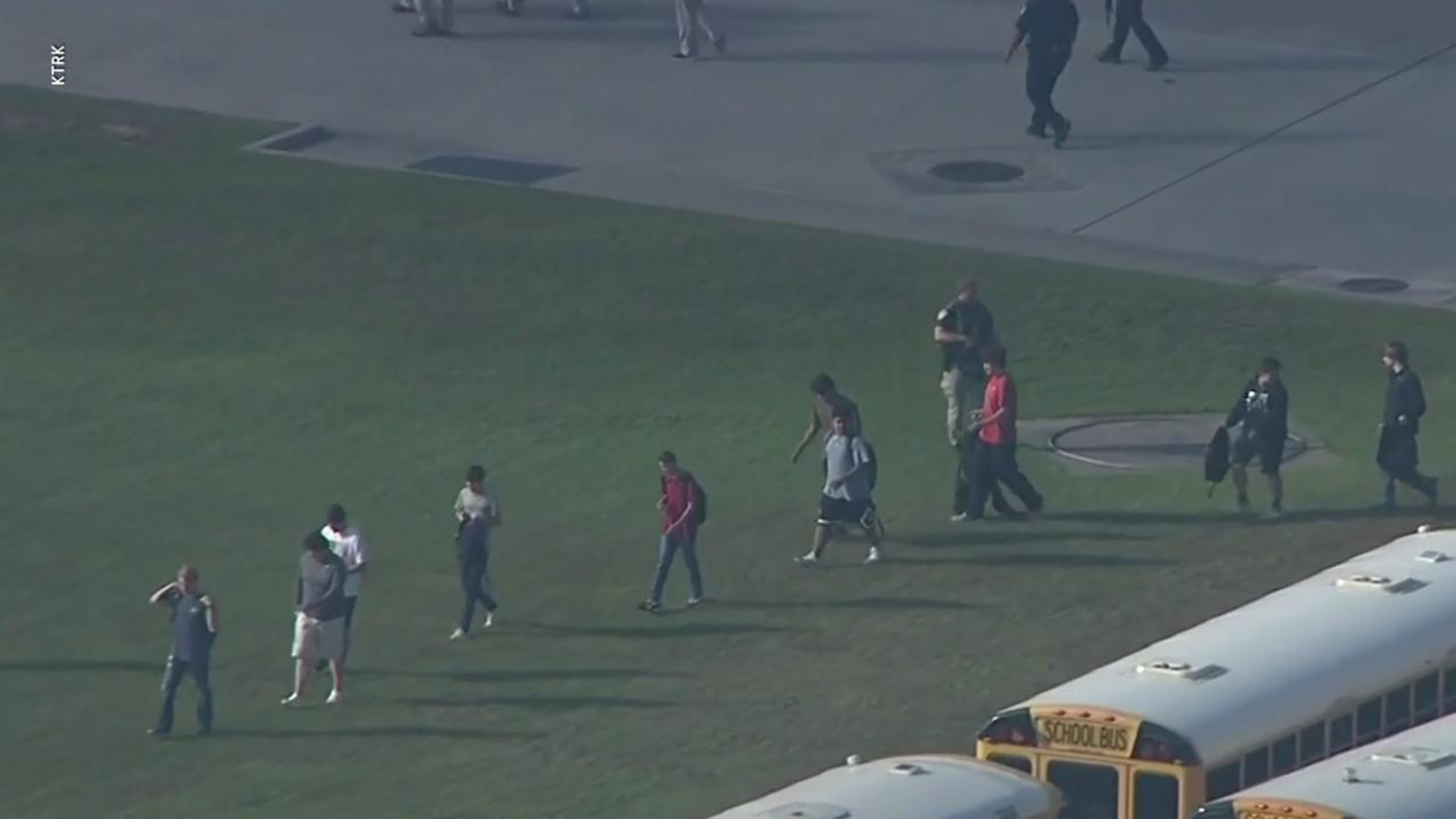 A 14-year-old fired about 10 rounds with a rifle at Highland High School, wounding a 15-year-old student.

On the 19th anniversary of the Columbine High School shooting, Sky Bouche, 19, a former student at Forest High School, returned to the campus with a shotgun and fired through a classroom door, injuring a 17-year-old student.

A man was shot in the stomach at Raytown South Middle School during a track meet.

One person was wounded in a shooting at an apartment building on the University of South Alabama campus.

A female student, 17, was killed when a 17-year-old student shot her in a Huffman High School classroom in what appeared to be an accidental shooting. The suspect, who shot himself in the leg while trying to leave the scene, was charged with manslaughter.

A student was shot in a Jackson State University dorm. The injuries were not life-threatening.

A Norfolk State University student was shot in the buttocks from an adjacent dorm room while doing his homework. His injuries were not life-threatening.

A person was shot in a Mississippi Valley State University rec center. Police said the victim was not a student and the injuries were not life-threatening.

A man was shot multiple times on the Savannah State University campus and later died from his injuries. Neither the suspect nor victim was a student at the university, officials said.

A 17-year-old was shot outside Pearl-Cohn Entertainment Magnet High School. Police identified the suspect as a 14-year-old boy.

An Oxon Hill High School student was shot in the school's parking lot after a disagreement with two other teens. The victim survived the shooting.

A 12-year-old girl brought a gun to Salvador B. Castro Middle School and the weapon accidentally went off when her bag dropped. Four people were hit, including a 15-year-old student who sustained a non-fatal gunshot to the head.

A man, 32, was shot twice in the leg, and later died of his injuries, after a brawl during a Lincoln High School basketball game.

Two students were killed at rural Marshall County High School when a 15-year-old opened fire, injuring more than a dozen other students. The suspect was charged with two counts of murder and a dozen assault charges.

A 15-year-old girl was wounded when a student, 16, shot her inside the Italy High school cafeteria. The victim survived after she was airlifted to a Dallas hospital.

What we know: 10 dead in Texas school shooting, suspect identified as Dimitrios Pagourtzis

Texas high school student: 'You hear boom, boom, boom, and I just ran as fast as I could'

1 / 4
KTRK-TV ABC13, AP
In this image taken from video, law enforcement officers respond to a high school near Houston after an active shooter was reported on campus, in Santa Fe, Texas.