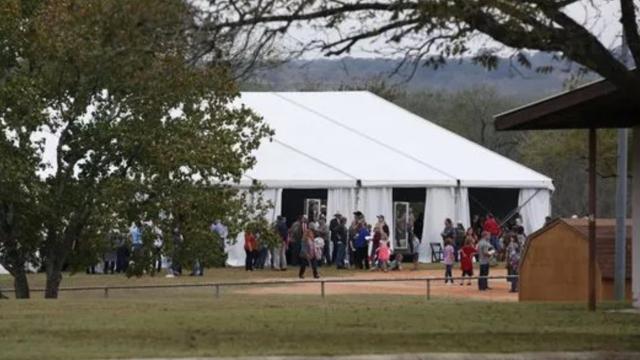 A cross was placed Sunday, Nov. 12, 2017, at the front of the sanctuary of First Baptist Church of Sutherland Springs in a memorial to the victims of the mass shooting that killed 25 people and an unborn child Nov. 5, 2017.

Voices without faces read aloud verses from the scripture.

"For everyone who believes in him shall have eternal life," says one in a simple recording on a loop over a public address system.

That's what several dozen residents of Sutherland Springs and nearby communities saw and heard when the church that witnessed a horrific mass killing was opened for short, solemn tours.

The tours, which included ones for reporters and photographers, came just before sundown Sunday, one week after 25 people, including a pregnant woman whose unborn child was killed, were gunned down in a rampage that has left this tiny rural Texas community numb with grief.

Short video from inside #SutherlandSprings church. It's cleaned up. Recorded scripture reading in background pic.twitter.com/4VsmhzbyCv

"We had some amazing people come and pull off a miracle to basically rebuild this sanctuary," Associate Pastor Mark Collins said at the broken church's front door.

Church officials, who earlier had suggested the nearly 100-year-old building would come down, said no decision has been made on whether to demolish it or to give it new life. Either way, Collins said, services will be held inside the building next Sunday.

That sanctuary showed to the public was stripped of any outward sign of violence. Blood-stained carpet was gone and the concrete floor painted white. Pews where worshipers were slain were taken out.

The white chairs with the names of the victims painted on them were arranged to show where the fallen had taken their final breaths.

Donna Tumlinson counts herself among those who believe her church is far more than just a building.

“The people of First Baptist are so open and so giving,” said Tumlinson, who with five members of her family came back to Sutherland Springs on Sunday, the day their church would open its doors for the first time since a gunman took 25 lives in a matter of minutes.

“They give to their community, they give to people who are hungry,” she added. “They just give.”

At a community-wide service nearby earlier in the day, Pastor Frank Pomeroy, whose teenage daughter was among the dead, acknowledged the unusual decision to reopen what he called a place of peace and reflection that had been violated with unspeakable bloodshed.

Chairs adorned with roses Sunday, Nov. 12, 2017, mark where victims were found a week earlier in the sanctuary of First Baptist Church of Sutherland Springs. A memorial was created and opened to the public to honor the 25 people and the unborn child who were killed Nov. 5, 2017, in the church.

For Pomeroy, erasing the visible signs of destruction demonstrated the resolve that comes with faith.

He said he knows that despite the grief, loss, anger and emptiness that scarred the Sutherland Springs landscape in the hours after the attack, evil has not conquered the community he has pastored for 15 years.

Holding a Bible inside a giant tent where about 1,000 people of a variety of faiths came to show support, Pomeroy said no doubt has crept into his mind that in the end, human goodness will triumph.

"I know this," he said, holding the Bible high with his left hand, "because I've read to the end of the book."

More: Mass shootings and trauma: In a world that no longer feels safe, how do we cope?

Memorial inside the Sutherland Springs church

1 / 10
Courtney Sacco/Caller-Times
Members walk inside the First Baptist Church of Sutherland Springs to visit the memorial inside on Sunday, Nov. 12, 2017. On Nov. 5, 2017, one week earlier, 25 people and an unborn child were killed in a shooting at the church.