'They killed Stephon Clark. They continue to kill us': Hundreds rally for justice after unarmed man killed by police

'They killed Stephon Clark. They continue to kill us': Hundreds rally for justice 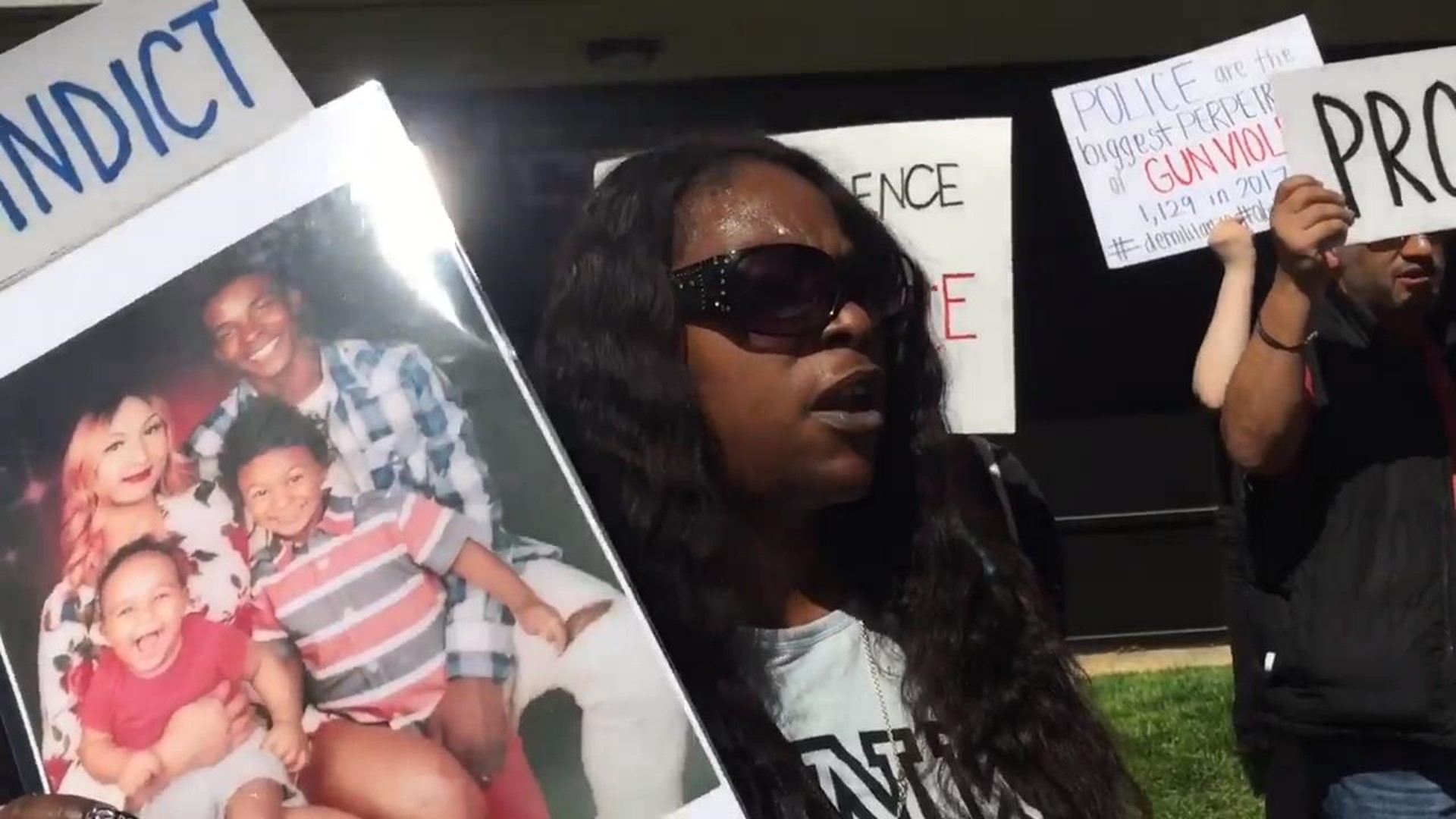 Credit: ELIJAH NOUVELAGE, EPA-EFE
Protesters confront law enforcement officers in the street after a woman was struck by a Sacramento Sheriff's Department vehicle.

After a day of peaceful rallies to demand justice for Stephon Clark, 22, an unarmed black man who was killed by two Sacramento police officers, tensions escalated Saturday night when a sheriff's SUV appeared to hit a protester during a vigil, videos showed.

The person was taken away by an ambulance, and California Highway Patrol said an intersection was blocked as they investigated.

Video showed demonstrators surrounding two sheriff's vehicles as an officer told the crowd to "back away from my vehicle." As the first car passed by the protesters, the other appeared to strike a person who then fell to the ground.

Fire department spokesman Chris Vestal told The Sacramento Bee the department responded to a collision between a vehicle and a pedestrian and transported the person to the hospital, but he did not provide more details. Sacramento County Sheriff's Department did not immediately respond to the Bee's request for comment.

"I heard wheels spin. And then I saw her body flung to the curb," legal observer Tifanei Ressl-Moyer told the Bee. "The vehicle sped off and some protesters went after them."

The vigil comes on the heels of the release of an independent autopsy that found officers shot Clark eight times, most of the bullets hitting him in the back.

Earlier Saturday, flanked by two large posters showing Clark and Joseph Mann, who was killed by Sacramento officers in 2016, retired Sacramento Kings basketball player Matt Barnes led one of the rallies at a downtown park.

Barnes has been supportive of the family and also attended Clark's funeral on Thursday, which attracted hundreds, including civil right activist Al Sharpton. In front of the hundreds gathered Saturday, Barnes called for change.

"They killed Stephon Clark. They continue to kill us," he told the crowd, offering solutions, such as officers spending more time in the communities they patrol.

Throughout the week, peaceful rallies have disrupted traffic, blocked access to NBA basketball games and disrupted a local city council meeting since Clark was shot and killed in his grandmother's backyard on March 18.

An already planned rally set for Saturday to commemorate farm labor leader Cesar Chavez Day was modified with a focus on Clark's death, the The Sacramento Bee reported.

Protesters say while they marched for the rights of immigrants and workers, they needed to address the issues between police and minorities.

Credit: Rich Pedroncelli, AP
Former NBA player Matt Barnes holds Cairo, one of the sons of police shooting victim Stephon Clark, as he speaks at a rally aimed at ensuring Clark's memory and calling for police reform, Saturday, March 31, 2018, in Sacramento, Calif. The gathering comes nearly two weeks after Clark, who was unarmed, was shot and killed by two Sacramento police officers. Barnes, a Sacramento native, who organized the event, announced he was starting a college scholarship fund for Clark's two sons and the children of parents killed by police nationwide. At left, the Rev. Shane Harris holds Clark's other son, Aiden. (AP Photo/Rich Pedroncelli) ORG XMIT: CARP105

Later Saturday, hundreds gathered at the rally organized by Barnes, who grew up in Sacramento and is a father of two. He told the crowd he feels connected to what happened.

He said he watched with his sons as Clark's shooting was broadcast on the news. After seeing Clark was unarmed and only had a cellphone, one of his sons remarked, "so cops are bad." The comment struck him because Barnes said he didn't know how to reply.

He said he hopes Saturday will help "hold these people accountable, to bring the community together, and address the black on black crime issue in not only this neighborhood but in neighborhoods across the country."

He said it's unfair for an officer to shoot and kill someone then get a "paid vacation," referring to the two officers who shot Clark and are now on paid administrative leave until an investigation is completed.

“Tons of former and current players called me to ask what I was doing, so myself and my team we jumped in the line of action, providing whatever the family needed and putting together the rally," Barnes said.

Chants of "no justice, no peace" and "Stephon Clark" started off the rally as Rev. Shane Harris, president of the San Diego chapter of Sharpton's civil rights organization National Action Network, took the stage and riled up the crowd.

He said there have been too many of these shootings and it's "time to stand up America" and change policing.

Clark's family and the family of Mann sat on stage during the gathering holding hands and wearing shirts that honored the men killed by officers.

At the end of the rally, both of Clark's young sons joined Barnes on stage. He announced he was starting a scholarship fund to help them and other children go to college.

"I fear for the streets and now I've got to fear the cops," Barnes said as he held one of the boys, who shyly nestled into his shoulder. "How do we explain to our kids that because of the color of your skin that people aren’t going to like you."

"That’s not fair," he continued, "but that’s something you have to explain to your kids everyday."

More: After Stephon Clark shooting, cries for change — and painful echoes of past deaths

"From the bottom of my heart, I urge our entire community to continue to work together through nonviolent civil action as we pursue justice and demand reform," Steinberg said.

His death reignited the familiar frustration and anger after similar police shootings of black unarmed men. On Friday, the release of an independent autopsy his family commissioned led a Black Lives Matter protest as anger swelled in the community hearing that Clark was shot by police mostly from behind.

"This independent autopsy affirms that Stephon was not a threat to police and was slain in another senseless police killing under increasingly questionable circumstances," said Benjamin Crump, a high-profile civil rights attorney hired by Clark's family.

Police made no arrests during Friday's rally.

"The crowd was not violent," police Capt. Norm Leong told The Sacramento Bee. "The protestors expressed their rights and we tried to assure safety for the community. As long as they were nonviolent, we try to facilitate the protest movement."

More: After Stephon Clark's death, shock and mourning in communities across the nation

Clark was fatally shot after officers responded to a call of someone breaking into cars. They said they falsely thought Clark was holding a gun. He was found only with a cell phone.

Two officers fired 20 rounds at him, the department said after the shooting.

His family requested an independent autopsy after authorities said an official report wouldn't be released until the case is finished in the courts.

Clark’s death is far from the first police interaction turned tragic, as the local chapter of Black Lives Matter lists a dozen violent encounters over the past few years.

Some protesters have called for police to face criminal charges and donned black shirts calling for justice, a common sentiment after similar high-profile cases, such as Michael Brown in Ferguson, Philando Castile in Saint Paul and Eric Garner on Staten Island.