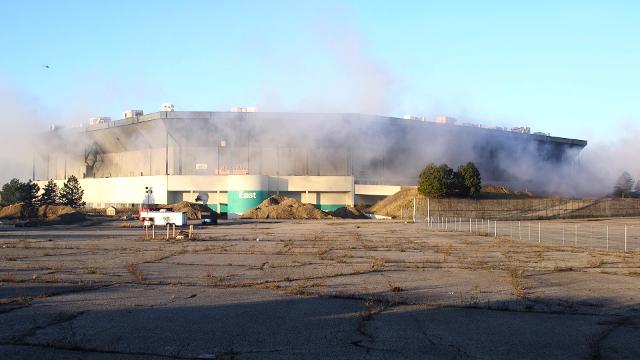 Credit: Junfu Han, Detroit Free Press
The Pontiac Silverdome before, during and after the implosion, the stadium is still standing on Sunday, Dec. 3, 2017.

PONTIAC, Mich. — A series of thunderous detonations rocked the Pontiac Silverdome early Sunday morning, sending up clouds of smoke and thrilling a spectator crowd of hundreds out to watch the start of the stadium's demolition.

But as the smoke cleared, a problem became apparent: the Silverdome was intact.

Officials with the demolition contractor, Detroit-based Adamo Group, confirmed that the explosions failed to bring down the steel columns supporting the Silverdome's upper level. The detonations — and anticipated collapse of the upper level — were to be the opening round for a year-long demolition project, which will mostly be done with hydraulic excavators.

Roughly 10% of the explosive charges did not detonate due to a wiring issue, said Rick Cuppetilli, executive vice president with Adamo. These unexploded charges were set up in eight key locations around the Silverdome. The precise cause of the wiring issue remained uncleared early Sunday afternoon.

"There's wires separated somewhere," Cuppetilli said. "We've researched it, we haven't found it yet, we're going to continue research, but it's not coming down today."

Cuppetilli said the columns could be taken out later this week — perhaps as early as Monday — by detonating the unexploded charges or by using excavators.

He said the demolition crew was unsure whether a Friday night trespassing incident on the property had any connection, whether accidentally or intentionally, to the failed detonations.

“We actually saw flashlights in there, security tried to converge, and they jumped the fence,” Cuppetilli told the Detroit Free Press. “They could have tripped over a wire when they were running away.”

Hundreds of people awakened early Sunday morning to drive to the Silverdome and watch the detonations, causing predawn traffic jams outside the designated viewing areas. Herman Moore, Eddie Murray and other former Detroit Lions came out for the spectacle.

"It was almost like when you’re going to a game, and all the fans are here waiting for you to pull in," Moore said of the crowd. 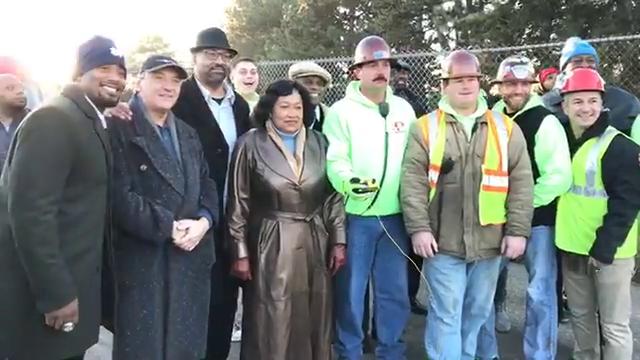 The failed implosion was broadcast live by media outlets. It quickly became fodder for wisecracks on social media.

Pontiac Mayor Diedre Waterman, who watched the event from a viewing area, said Sunday's event could in some ways be seen as a metaphor for Pontiac — a city that, despite hard times, still refuses to give up.

“This is a little unscripted," Waterman said. "We’re listening to the demolition contractors and I think people got excitement, got a chance to share their memories and their nostalgia a little bit longer than we expected.”

"We didn’t want it sitting here as a blighted property, because it’s going to be redeveloped, which is the best use for this valuable piece of property,” the mayor said.

For Adamo, Sunday was a setback following the company's successful demolition last month of the Georgia Dome.

A trio of Adamo employees who were watching Sunday's implosion turned to each other once the debris had settled. “That didn’t work,” they said.

Shortly after the detonations, a superintendent with SCM Engineer Demolition, the East China Township-based company subcontracted by Adamo for the blast, initially told reporters that the implosion was, in fact, a success.

"Sometimes this happens, but gravity will come over and it will do its job,” said Kevin Lindke, project superintendent for SCM.

But about a half hour later, Cuppetilli of Adamo said that not all the charges went off and that the still-intact columns must be removed.

If there was one person who may have been happy about the Silverdome’s failed implosion, it could have been Harry Arnold, the owner of Detroit Drone, who had been contracted by Adamo to film the event. Having filmed several of these, Arnold said demolitions were always sad for him to watch.

“So much was put into building it and it just comes down. It’s like seeing years just crumble in seconds,” he said, adding how to his ears, the exploding steel beams almost sound like screaming.

“It sounds like lobsters being put in a boiling pot, the steel lets out a high-pitched scream," he said. "It's definitely sad."

The Silverdome opened in 1975 and has been used only sporadically since 2002, when the Lions moved to Ford Field in Detroit. Triple Investment bought the stadium from the city of Pontiac in a 2009 auction for $583,000, but did not find a long-term user or buyer for the site.

The stadium has been in poor physical condition and lost its inflatable roof several years ago in a winter storm.

Perhaps the best seats to Sunday's action belonged to Greg Every, 54, of Plymouth, who hauled a set of four actual Silverdome chairs to the main viewing area.

"They're all original," he said.

The blue seats belong to a batch of 300 seats that Every and a friend pulled out of the Silverdome this summer, and that he plans to sell for $250 each at his store, FanaticU.com. The seats came from a section of the lower bowl where Every sat during the Lions' 38-6 victory over the Dallas Cowboys in 1991 to win the NFC Central Division.

"It was like the greatest spot we could be in the stadium," he said. "It was an unbelievable memory."

1 / 59
Gabriel B. Tait/Detroit Free Press
Barry Sanders, Detroit Lions running back, on the bench Sunday, Dec. 21, 1997 at the Pontiac Silverdome.