Aly Raisman on alleged abuser: 'You don't think that of someone, so I trusted him'

Raisman spoke about the abuse in an interview with '60 Minutes'. 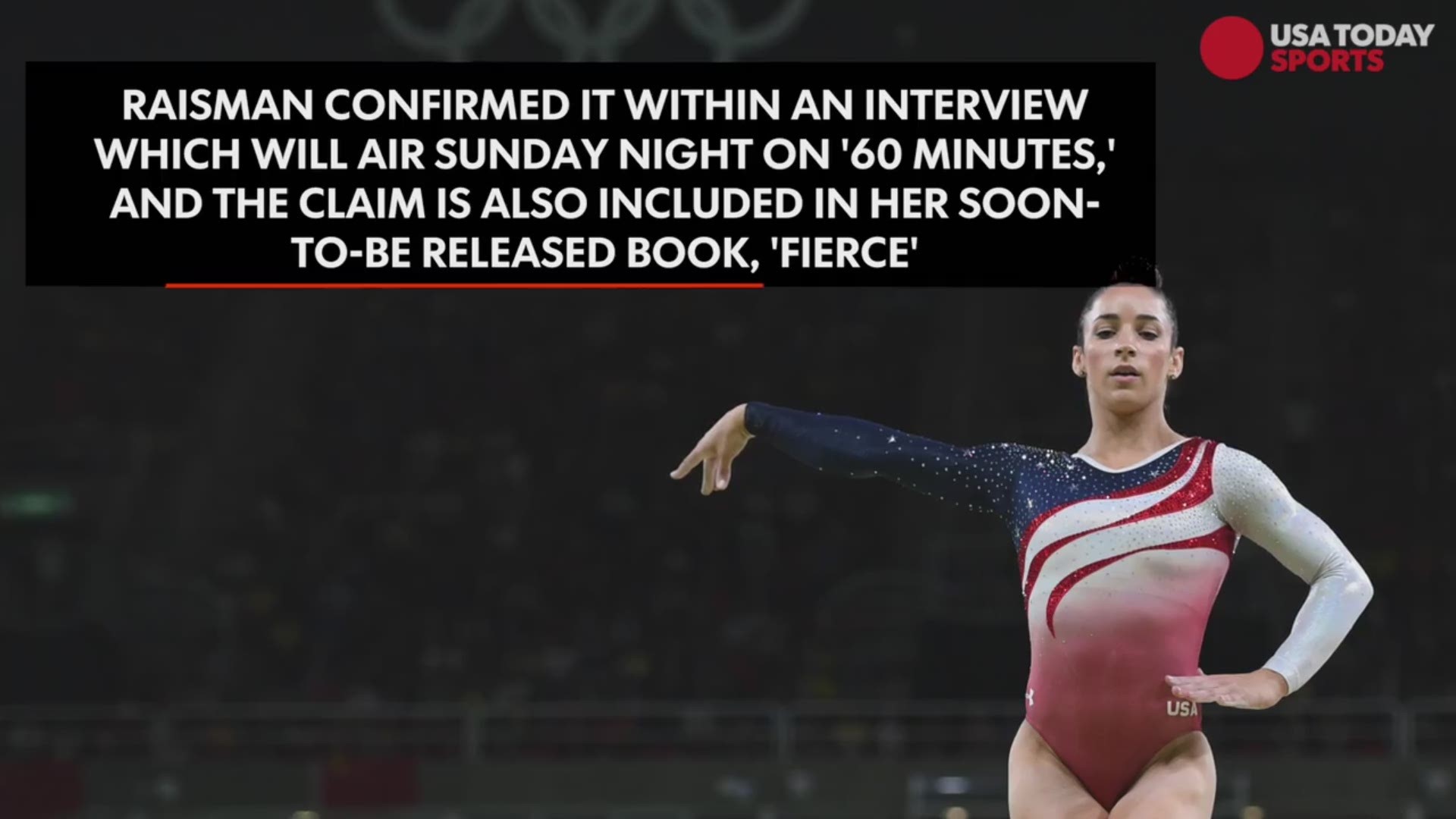 In an interview with 60 Minutes, three-time Olympic gold medalist Aly Raisman said a longtime USA Gymnastics doctor accused of sexually abusing her and other women gained her trust by bringing her desserts or gifts.

Raisman, the captain of the 2012 and 2016 Olympic teams, told 60 Minutes that she first realized Larry Nassar had abused her after being interviewed by a USA Gymnastics investigator in 2015.

“I was just really innocent. I didn’t really know. You don’t think that of someone, so I trusted him,” Raisman said in the interview with 60 Minutes, which aired Sunday night.

“He would buy me little things, so I really thought he was a nice person,” Raisman said. “I really thought he was looking out for me. That’s why I want to do this interview. I want to talk about it. I want people to know that just because someone is nice to you, and just because everyone is saying they are the best person, it does not make it OK for them to ever make you uncomfortable, ever.”

Raisman declined to detail the abuse during the interview but said it started when she was 15. She also describes the alleged abuse in her book, Fierce, being released this week.

Raisman is the second member of the Fierce Five squad that won gold at the London Olympics who has said Nassar abused her.

According to the Lansing State Journal, which is part of the USA TODAY Network, more than 140 women have alleged sexual abuse by Nassar, under the guise of medical treatment.

Through his attorneys, Nassar, who worked for decades at Michigan State University, has denied any wrongdoing.

Nassar pleaded guilty to federal child pornography charges in July, and he faces 22 to 27 years in prison when he’s sentenced on Dec. 7. He also faces 33 charges of criminal sexual conduct in Michigan.

Nassar was USA Gymnastics’ team physician for nearly 20 years, beginning in 1996. USA Gymnastics fired him in the summer of 2015, but the federation waited five weeks before alerting the FBI.

USA Gymnastics previously said it conducted its own investigation. Raisman said she was interviewed as part of that in 2015.

She told the investigator, “his touching makes me uncomfortable but he’s so nice to me and I don’t think he does it on purpose because I think he cares about me.”

Raisman said it was after an interview with the investigator that she realized Nassar had abused her.

“I’m still trying to put the pieces together today,” she said. “It impacts you for the rest of your life.”

Asked if she thought she was receiving medical treatment, Raisman said, “I didn’t know anything differently. We were told he’s the best doctor, he’s the United States Olympic doctor and the USA Gymnastics doctor and we were very lucky we were able to see him.”

“We were told he is the best doctor…. and we were very lucky we were able to see him,” Raisman says about trusting Larry Nassar. #60Minutes pic.twitter.com/CDEh7ISyT4

Raisman told 60 Minutes that she met with the FBI after the Rio Olympics, where she won a second team gold as well as silver medals in the all-around and floor exercise.

Raisman said USA Gymnastics did not do enough to educate athletes. Though the organization has policies that adults should not be alone with minors, she told 60 Minutes that Nassar would treat her and other athletes in their hotel rooms.

“Nobody ever educated me on make sure you’re not alone with an adult. Make sure he’s not making you uncomfortable,” she said. “I didn’t know the signs. I didn’t know what sexual abuse really was, and I think that needs to be communicated to all these athletes no matter the age.”

.@Aly_Raisman says she was alone with Dr. Nassar despite a long-standing USA Gymnastics policy that adults should “avoid being alone with a minor.” pic.twitter.com/RrKT6cHpS2

Raisman has been openly critical of the way USA Gymnastics has handled complaints against Nassar as well as other allegations of sexual abuse. The Indianapolis Star, also part of the USA TODAY Network, has reported more than 360 cases in which gymnasts have accused coaches of sexual transgressions over 20 years.

Raisman told 60 Minutes that she’s been asked why the women and girls who said they’ve been abused by Nassar didn’t come forward sooner.

“Why are we looking at why didn’t the girls speak up? Why not look at — what about the culture?” she said. “What did USA Gymnastics do and Larry Nassar do to manipulate these girls so much that they are so afraid to speak up?”

“What did USA Gymnastics do, and Larry Nassar do, to manipulate these girls so much that they are so afraid to speak up?" -- @Aly_Raisman on #60Minutes pic.twitter.com/03A22gems8

That echoes criticism of the organization that Raisman voiced in August during the national championships when she and her Final Five teammates from Rio were inducted into the USA Gymnastics Hall of Fame.

“It doesn’t matter if you’re the Olympic champion or you’re an 8-year-old that goes to gymnastics in Ohio, or wherever you are in the United States,” Raisman said in a joint interview with USA TODAY Sports and The Associated Press in August.

“Every single kid is important, and I want USA Gymnastics to do a better job with that.”

At that induction ceremony, Raisman said she did not talk to USA Gymnastics officials.

“There was a table of a lot of people that are very high up at USA Gymnastics that were in the room, and they didn’t come over,” she said. “My teammates and I were all sitting at a table, and they did not come over to say hi to us or to congratulate us.

“All we’ve done is worked really hard, we love the sport and we were treated like we don’t want anything to do with you girls.”

Maroney came forward last month in a Twitter post as part of the #MeToo campaign, saying Nassar abused her under the guise of medical treatment. Nassar abused her until she left the sport, Maroney wrote, adding, "It seemed whenever and wherever this man could find the chance, I was 'treated.' "

Maroney said Nassar abused her before the U.S. team won gold in the 2012 Olympics and before she won silver on vault.

"People should know that this is not just happening in Hollywood," Maroney wrote. "This is happening everywhere. Wherever there is a position of power, there seems to be potential for abuse. I had a dream to go to the Olympics, and the things that I had to endure to get there were unnecessary and disgusting.”

USA Gymnastics announced last week that it hired Kerry Perry, formerly the vice president of business development at Learfield Communications, as its new CEO. She is expected to start on Dec. 1.

Perry replaces Steve Penny, who resigned as CEO in March under pressure from the U.S. Olympic Committee in the wake of the sex abuse scandal.

Former federal prosecutor Deborah Daniels, hired by USA Gymnastics, found the organization needed a “complete cultural change” so safety and well-being of athletes was a greater priority than world and Olympic medals.

Daniels made 70 recommendations, which USA Gymnastics has adopted and is in the process of implementing. Some have already been addressed with the opening of the U.S. Center for Safe Sport, an independent agency created by the USOC to handle sexual misconduct cases in the Olympic movement.

In a statement, USA Gymnastics said it was "appalled by the conduct of which Larry Nassar is accused, and we are very sorry that any athlete has been harmed during her or his gymnastics career."

"Aly’s passion and concern for athlete safety is shared by USA Gymnastics," the statement said. "We are committed to doing what is right, and we want to work with Aly and all interested athletes to keep athletes safe."

Asked if she’s concerned that being outspoken could affect her chances of making the team for Tokyo in 2020, Raisman said, “I think that’s a very valid point, but I think that this, speaking out and creating positive change so that athletes are safe is more important than any Olympic medal you could ever win.”