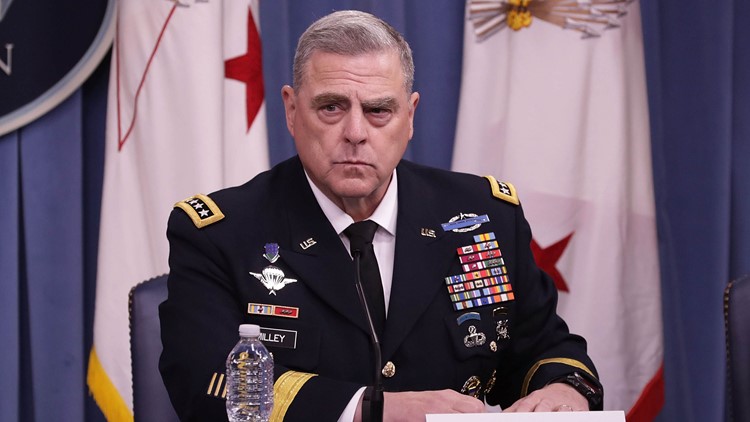 Photo by: Chip Somodevilla
Army Chief of Staff Gen. Mark Milley announces that Austin, Texas, will be the new headquarters for the Army Futures Command during a news conference at the Pentagon July 13, 2018 in Arlington, Virginia.

President Donald Trump made it official Saturday, saying he will nominate Army Gen. Mark Milley as the next chairman of the Joint Chiefs of Staff, the military's highest-ranking officer.

If confirmed by the Senate, Milley would replace Marine Gen. Joseph Dunford whose second, two-year term expires in 2019.

"I am thankful to both of these incredible men for their service to our Country!" Trump said in making the announcement by tweet. "Date of transition to be determined."

Milley has been a member of the Joint Chiefs since August 2015 when he took over as the Army's top officer. A career infantryman, Milley has deployed to Iraq and Afghanistan and commanded conventional and Special Forces units.

I am pleased to announce my nomination of four-star General Mark Milley, Chief of Staff of the United States Army – as the Chairman of the Joint Chiefs of Staff, replacing General Joe Dunford, who will be retiring....

Milley has advocated for increased spending to upgrade current Army weapons systems and to buy new ones to help counter the rise of adversaries such as China and Russia.

Dunford, who was first nominated by then-president Barack Obama, received the nod for a second term from Trump in 2017.

Trump signaled to reporters on Friday that he would announce the new chairman ahead of Saturday's Army-Navy football game, which the president is attending.

"I have another one for tomorrow that I'm going to be announcing at the Army-Navy game. I can give you a little hint: It will have to do with the Joint Chiefs of Staff and succession."