In an emotional scene before Monday's race, every NASCAR driver and crew member walked down pit road alongside Bubba Wallace. 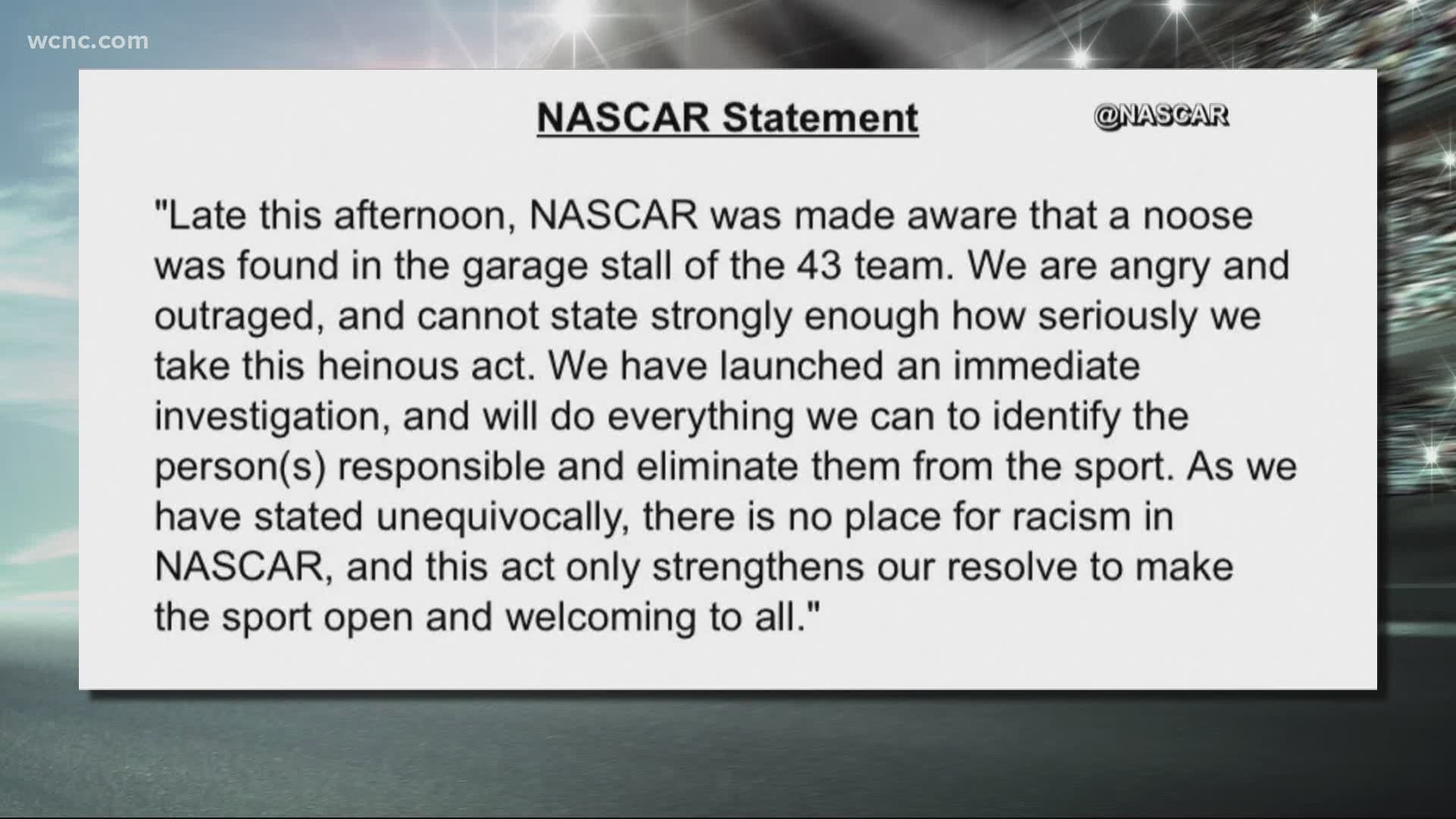 Every NASCAR driver and crew member came together to show their support of Bubba Wallace before Monday afternoon's race at Talladega, one day after a noose was found in his garage stall.

Wallace, the only Black driver racing full-time in NASCAR's top series, successfully pushed the stock car series to ban the Confederate flag at its venues less than two weeks ago.

NASCAR President Steve Phelps said the noose was found Sunday afternoon in Wallace's garage stall by a crew member. He said the FBI was "currently on site" investigating.

Ahead of Monday's rain-delayed race, Wallace's car was pushed down pit road as the entire NASCAR garage walked behind it.

Once at the front of the line, all the other NASCAR drivers stood in solidarity behind Wallace.

The words #IStandWithBubba were also painted on the infield grass at Talladega Superspeedway in response to Sunday's incident.

U.S. Attorney Jay Town said his office, the FBI and the Justice Department's Civil Rights Division are involved in the investigation.

“Regardless of whether federal charges can be brought, this type of action has no place in our society,” Town said.

Richard Petty, seven-time NASCAR champion and owner of Wallace's famed No. 43, was at Talladega to support his driver. Petty, who turns 83 next month, has not attended a race during the pandemic and said in a statement he was “enraged by the act of someone placing a noose in the garage stall of my race team."

“There's absolutely no place in our sport or society for racism,” wrote the Hall of Famer known simply as “The King.” "This filthy act serves as a reminder of how far we still have to go to eradicate racial prejudice and it galvanizes my resolve to use the resources of Richard Petty Motorsports to create change.”

Credit: AP
Nascar drivers Kyle Busch, left, and Corey LaJoie, right, join other drivers and crews as they push the car of Bubba Wallace to the front of the field prior to the start of the NASCAR Cup Series auto race at the Talladega Superspeedway.

Credit: AP
Driver Bubba Wallace, right, is overcome with emotion as he and team owner Richard Petty walk to his car in the pits of the Talladega Superspeedway.