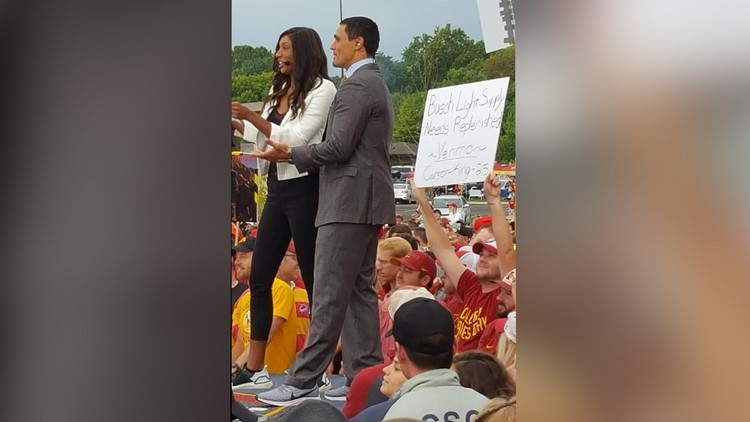 A 'Gameday' fan's clever sign got him a lot of beer money. Now he's donating it all.

AMES, Iowa — Tune into ESPN’s “College GameDay” any Saturday during football season and you’re sure to see some rowdy collegiate football fans.

Along with being in their game-day best, i.e. school colors, many students and fans create homemade signs for their moment on national television.

Sign-wise, a former Iowa State student, nailed it. Carson King managed to create a sign that was humorously relatable to hundreds of viewers. Simply put, he needed beer money.

Before heading to the game, King's mother jokingly noted this would be her "proudest moment." Little did the King family know, the sign would create a beautiful gift.

With friends and his sign, King arrived at College GameDay around 5:30 am to find the ESPN main stage was completely full. They decided to go to a side-stage, not knowing a great deal of the show would be filmed there.

"I didn't realize anyone saw the sign until the sports anchors left the stage and my buddy, Tyler, asked me, 'Who keeps texting you?'" King said.

Looking at his phone, King was shocked by the response. Within an hour of holding the sign behind the stage, he received more than $400 worth of Venmo donations.

"I was like, 'This is great! It can help with my mortgage, bills and A LOT of beer,'" King said.

But as donations continued to pour in, King knew he had better things to do with the money. By the end of Saturday, King had received over $1,600.

“With all the donations my CollegeGameDay sign for Busch Beer has received, I will be donating all but enough for a case of Busch Light to the University of Iowa Children’s Hospital,” King tweeted Saturday.

The recipient of the “beer money” further conveyed King's kind heart as he decided to donate the funds to the University of Iowa's Children's Hospital. Like most schools in the same state, Iowa State and University of Iowa are rivals.

To King, all competition between the schools vanished in honor of the kids seeking treatment at the hospital.

"I figured this was a way I could help out and give those kids anything and everything," King said.

The choice was fitting as the hospital stands aside University of Iowa's Hawkeyes’ Kinnick Stadium. A tradition among fans at home games is to do the “Iowa Wave” to the young patients watching through the windows of their hospital rooms.

"Once people saw it was going to the hospital, they took it and ran with it," King said.

As of early Thursday morning, King said he had received over $67,000.

Busch Beer and Venmo also joined in, matching King’s donation to the hospital with heartfelt messages.

“This is the best thing we have read all year, we’re inspired,” Busch Beer tweeted along with “throwing in” some Busch Light King was looking for.

“We see a lot of great stories, but this is one of our favs,” Venmo also tweeted. “Count us in for matching the donation to the hospital, too.”

King was so stunned by Venmo and Busch's response, he said he tweeted back at Busch saying, "I love you," in which they replied, "We love you too, man."

With Venmo and Busch’s match of funds, the hospital is going to receive more than $200,000, King excitedly announced Thursday morning.

King is working with the University of Iowa to collaborate a time he can present the check in person, something he greatly looks forward to.

King is waiting until after he presents the check to celebrate with the Busch purchase that sparked the viral sign, although the company said they were going to send him beer.

King said he will continue to collect donations through his Venmo, Carson-King-25, for the hospital throughout September. King encourages those who do not have a Venmo account to donate through the hospital's website.

Now that is something to cheers to.