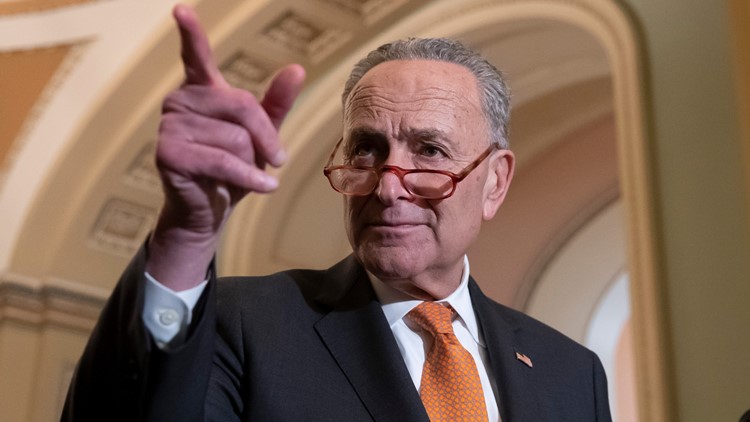 Photo by: AP
Senate Minority Leader Chuck Schumer of N.Y., points to a question as he speaks with reporters Tuesday, Dec. 3, 2019 in Washington, on Capitol Hill. (AP Photo/Alex Brandon)

Sen. Charles Schumer says the agreement over the National Defense Authorization Act (NDAA) was reached late Friday night on Dec. 6. The agreement must still be passed by the House and Senate before it would head to President Trump to be signed into law. Schumer says a vote is expected later this week.

The NDAA is an annual defense spending bill. According to NBC News, the paid parental leave measure of the bill was contentious and one of the last to be finalized. The Associated Press and Vox reports that Democrats agreed to support he establishment of President Donald Trump’s proposed Space Force in exchange for the parental leave measure.

“It’s a real breakthrough for families,” Schumer said in a statement to the Associated Press. “Not only does it mean that federal employees will get what they’re entitled to, the federal government is a pacesetter. If you work for a private company, this means the pressure on your employer will be much greater to give you parental leave as well when the blessed event of a child comes around, or god forbid your child is really sick and needs serious care.”

The bill marks the first major change to the law regarding medical leave. The 1993 Family and Medical Leave Act provides 12 weeks of unpaid leave for civilian employees. Government workers currently use vacation and sick days for leav, and colleagues can gift unused leave to their coworkers.