Next Trump-Biden debates uncertain, though Oct. 22 is likely

After the president's doctor said he could resume campaigning this weekend, the Trump campaign called on the commission to hold next week's debate in person as set. 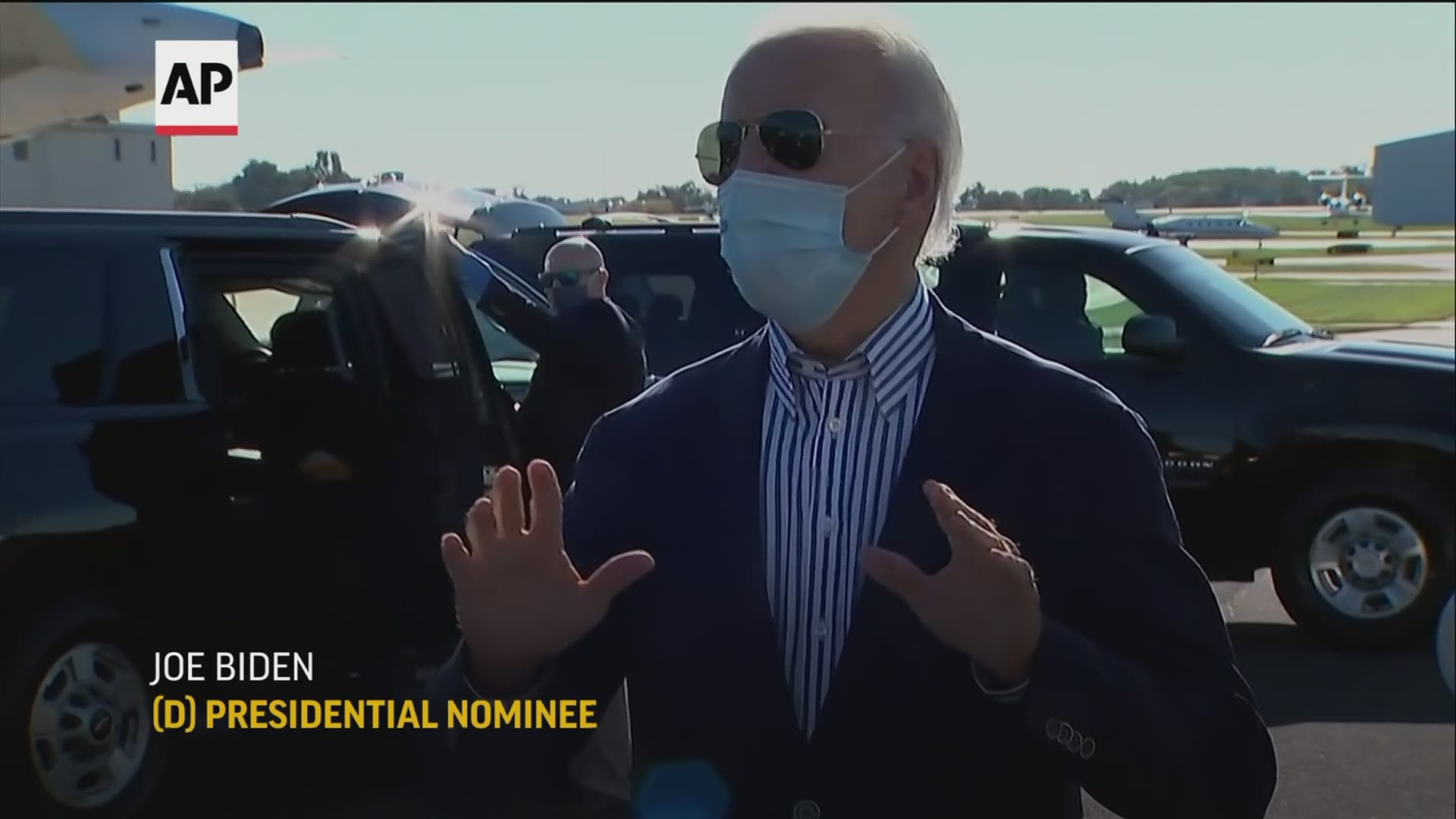 WASHINGTON, D.C., USA — The campaign's final debates between President Donald Trump and Democrat Joe Biden were thrown into uncertainty Thursday as the rival camps offered dueling proposals for the remaining faceoffs that have been upended by the president’s coronavirus infection.

The chair of the nonpartisan Commission on Presidential Debates told The Associated Press that the final debate, scheduled for Oct. 22, was still slated to go on with both candidates present as planned. But next Thursday's debate seemed to be gone, after the Trump team objected to the commission's format change.

The whipsaw day began with an announcement from the commission that the town hall-style affair set for Oct. 15 in Miami would be held virtually. The commission cited health concerns following Trump’s infection as the reason for the change.

Trump, who is eager to return to the campaign trail despite uncertainty about his health, said he wouldn’t participate if the debate wasn’t in person. Biden's campaign then suggested the event be delayed a week until Oct. 22, which is when the third and final debate was already scheduled.

Next, Trump countered again, agreeing to a debate on Oct. 22 — but only if face to face — and asking that a third contest be added on Oct. 29, just before the election. But Biden's advisers rejected squaring off that late in the campaign.

After the release late Thursday of a letter from Trump doctor Navy Cmdr. Sean Conley that the president had “completed his course of therapy” and could resume campaigning this weekend, the Trump campaign called on the commission to hold next week's debate in person as originally scheduled.

“There is therefore no medical reason why the Commission on Presidential Debates should shift the debate to a virtual setting, postpone it, or otherwise alter it in any way,” said Trump campaign manager Bill Stepien.

But commission chair Frank Fahrenkopf said late Thursday that the decision to hold the debate virtually, guided by its medical advisers at the Cleveland Clinic, was not going to be reversed.

The commission said it made the announcement in order to “protect the health and safety of all involved," including the everyday citizens invited to ask questions of the candidates.

The debate commission, which has the unenviable task of finding common ground between the competing campaigns, already came under scrutiny after the first debate between Trump and Biden deteriorated, with the president frequently interrupting his opponent and the moderator unable to take control.

The Oct. 22 debate in Nashville, Tennessee, is scheduled to feature a format similar to the first. Biden’s campaign has suggested that it be modified to the “town meeting” format, though the Trump campaign has not weighed in.

Founded after the 1984 presidential election, the commission has organized every general election debate since 1988 — and typically selects the dates, moderators, formats and locations without input from the candidates.

Biden moved quickly to make sure he would still appear in front of a television audience next week. Instead of debating Trump on Thursday, he will take part in a town hall sponsored by ABC News. As he campaigned in Arizona, Biden said he would indeed attend the Oct. 22 debate.

“We agreed to three debates back in the summer,” Biden said. "I’m showing up. I’ll be there. And if, in fact, he shows up, fine. If he doesn’t, fine.”

For Trump, who is recovering from COVID-19 at the White House after spending three days in the hospital, the health-induced changes are an unwelcome disruption to his effort to shift focus away from a virus that has killed more than 210,000 Americans this year.

In an interview with Fox Business anchor Maria Bartiromo shortly after the commission's announcement, Trump insisted he was in “great shape” and called the idea of a virtual debate a “joke.”

“I’m not going to do a virtual debate,” he declared.

Stepien said Trump would stage a rally rather than debate next Thursday, though it’s not yet clear if he will be well enough to do that.

With less than four weeks until Election Day and with millions of voters casting early ballots, pressure is building on Trump to turn around a campaign that is trailing Biden in polls nationally and in most battlegrounds, where the margin is narrower. A debate before an audience of tens of millions of television viewers could provide that reset.

But another debate could also expose Trump to political risks. GOP strategists say the party's support began eroding after his seething performance against Biden last week when he didn't clearly denounce a white supremacist group.

Trump's apparent unwillingness to change his style to win back voters he needs — particularly women — was on display again Thursday during his Fox Business interview when he referred to Democratic vice presidential nominee Kamala Harris as a “monster."

Campaigning with Harris in Arizona, Biden called Trump's characterization of the first Black woman on a major party's presidential ticket “despicable” and added that it was "so beneath the office of the presidency.”

This would not be the first time Trump has skipped a debate. During the 2016 Republican primary, he boycotted the last debate before Iowa’s first-in-the nation caucuses, holding a fundraiser for veterans instead — a move he later speculated may have contributed to his loss in the state.

Trump fell ill with the virus on Oct. 1, just 48 hours after sharing a stage with Biden in person during the first presidential debate in Cleveland. While the two candidates remained a dozen feet apart, Trump's infection sparked health concerns for Biden and sent him to undergo multiple COVID-19 tests before returning to the campaign trail. His campaign announced Thursday that Biden had undergone his fifth such test and was found to be negative.

Trump was still contagious with the virus when he was discharged from Walter Reed National Military Medical Center on Monday, but his doctor said Thursday he had “completed his course of therapy” and could resume campaigning this weekend. According to the Centers for Disease Control and Prevention, those with mild to moderate symptoms of COVID-19 can be contagious for as many as — and should isolate for at least — 10 days.

Associated Press writers Bill Barrow in Phoenix and Alexandra Jaffe and Jill Colvin in Washington contributed to this report.