One teacher and one student were killed when a school bus crash filled with fifth graders collided with a dump truck Thursday morning on a New Jersey highway. 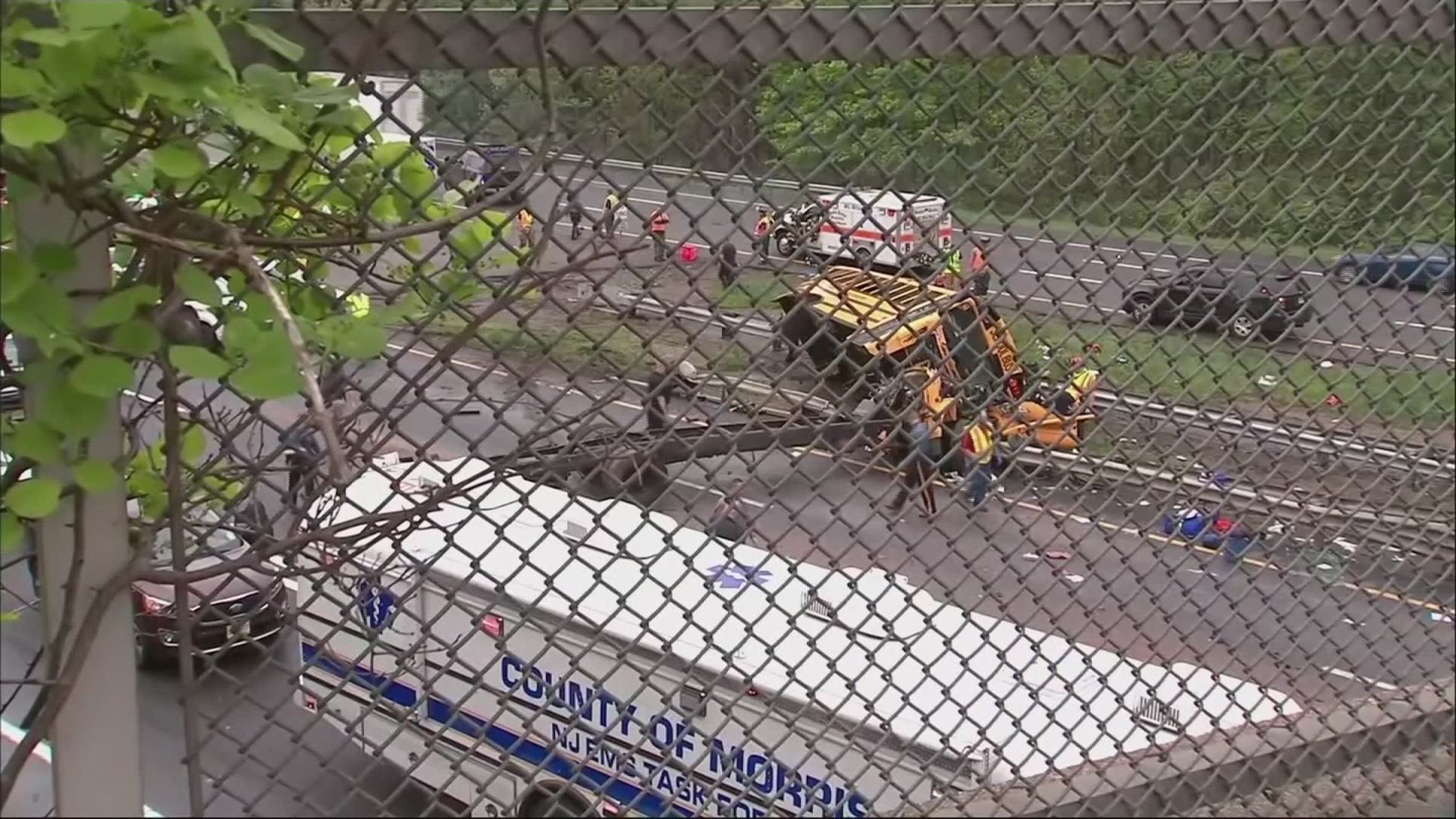 MOUNT OLIVE — A much-anticipated class adventure to a historic park became a nightmarish, deadly ride for New Jersey fifth-graders Thursday when their school bus and a dump truck collided on Route 80 in western Morris County, killing one student and a teacher and injuring 43 others.

The teacher who died was identified by a family member Thursday night as Jennifer Marie Williamson, a veteran educator of more than 20 years, according to state records. She was a fifth-grade teacher, according to the East Brook Middle School website.

Family members gathered Thursday night at her Paramus home, where a man who said he was her nephew confirmed her death.

The impact from the crash pushed the bus into guardrails and tore its body clear off its chassis, which remained at a right angle across the road, and twisted its front end into a yellow tangle of metal.

Immediately after the crash, the bus filled with students’ screams.

Theo Ancevski, 11, said that as the bus rolled onto its left side, he heard "a scraping sound" as it crushed a metal guardrail in the grassy highway median.

Some students were “hanging from their seat belts,” Theo said. 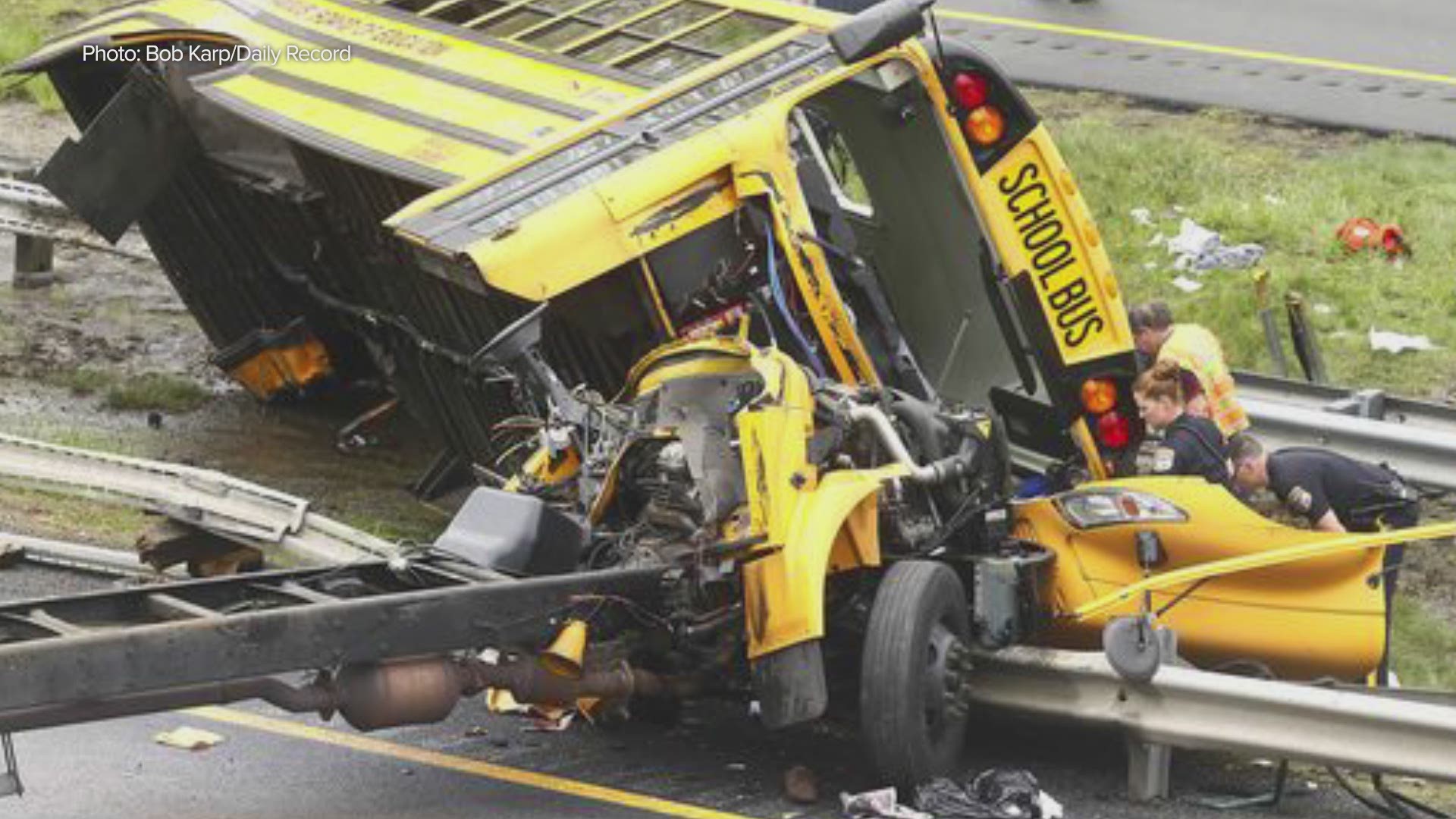 He and his classmates from East Brook Middle School scrambled out several windows and an emergency exit hatch in the roof, which was angled sideways.

Clothing and other personal belongings were strewn around the wreckage.

Theo said he first knew something was wrong when he heard a sound at the back of the bus — “something with one of the trucks behind us got hit as we toppled over.”

Officials confirmed that one student and a teacher died in the crash. Students were taken to at least five hospitals in the region to be examined and treated. Many were released by day’s end.

There were 45 people on the bus — 38 students and 7 adults, including the driver. Of those, 43 were injured, Gov. Phil Murphy said during an afternoon press conference at Paramus High School.

“Some patients are in critical condition and currently undergoing surgery,” Murphy said. “This is tragic. Our thoughts and prayers are with the families, teachers, counselors, the staff and the extraordinary first responders.”

“This is a devastation right now for our community,” she said.

The bus was one of three that were taking fifth-graders from East Brook Middle School on a class trip to Waterloo Village, a historic, restored Morris Canal hamlet operated by the state in Stanhope, about 45 miles west of Paramus.

The driver apparently missed Exit 25 along Route 80 west for Waterloo Village. The accident occurred a short distance beyond the exit, in Mount Olive, at about 10:20 a.m.

The red dump truck involved in the crash appeared to be loaded with sand or dirt. Painted in white across the back of the truck were the words “In God We Trust.”

Records link the truck’s license plate to a Belleville trucking company, whose vehicles have been involved in eight accidents in the past two years.

Officials provided no details Thursday about how the accident occurred, or who drove the bus or the truck.

The National Transportation Safety Board said it was not investigating the accident. The Morris County Prosecutor’s Office and the New Jersey State Police will jointly investigate.

“We’re going to work together … to make sure we get this accident investigated as detailed as possible,” said Maj. Brian Polite of the state police. “This is a tough situation … When you hear that call about an accident involving children, your heart just drops into your stomach.”

Officials said the dump truck driver is alive, but in the hospital, and that the bus driver was also injured.

Tedesco, the county executive, said the bus was part of the borough’s fleet, and the driver was employed by its Transportation Department. All school buses used in New Jersey must have lap-type seat belts or other child restraint systems, according to the state Department of Education.

School buses are inspected at least twice each year by teams from the New Jersey Motor Vehicle Commission.

The standards for school bus drivers include alcohol and drug testing upon initial employment, followed by random tests. Drivers must have a physical examination every two years and a criminal background check upon initial employment and at the time of renewal of their commercial license, and each year must submit a history of motor vehicle violations.

Thursday’s accident closed all three westbound lanes of Route 80 in the area and one eastbound lane, causing delays into the evening rush hour.

The other two Paramus school buses made it to Waterloo Village, but about 30 minutes later, chaperones and teachers told students they were returning to school because of bad weather.

It was not until the students had climbed back onto the buses and they were rolling along did the children notice the third bus was missing, said Zainab Qureshi, 11, a student on the trip.

Students had no cellphones with them because they were told to leave them in their lockers, and they were not told about the accident until the two buses had returned to their Paramus school, Zainab said.

East Brook Middle School released students early on Thursday, and Thomas J. LoBue, the school principal, emailed parents asking them to come to the school and pick their children up.

Zainab's mother, Shabnum Qureshi, said she heard about the accident and was scared because she had no way of reaching her daughter. Qureshi, who works in River Edge, said she left work and headed to the middle school to find her daughter.

Many worried parents, some crying and clutching tissues, soon started arriving at the school. Some embraced.

“This is something you hope never happens in your hometown,” said Angela Miaoalis, a parent picking up her child.

Tedesco spoke with a quavering voice as he told reporters that Paramus, his hometown, would pull through.

“This community has been strong,” he said. “It will continue to be strong. It will come together and support the entire educational community.”

He later said the community was still in a state of disbelief about the tragedy’s scale.