KNOXVILLE, Tenn. — 10News will air a special look back at the invasion and how it affected East Tennessee on June 6 at 5:30 p.m. You can find the full video here after it airs.

156,000 troops stormed ashore the beaches of Normandy on the northern coast of France. The attack, the start of a plan known as ‘Operation Overlord,’ took years of planning, practicing and predicting.

Thousands of troops would die over the course of the campaign, including 228 from East Tennessee.

23-year-old Clinton Riddle was among the East Tennesseans in Normandy that day. His mission involved touching down 14 miles behind enemy lines on a flimsy wood and paper glider.

“We cut the top out of a tree with the left wing when we went in, and hit real hard,” Riddle told 10News several years ago. “In fact, the field radio I was carrying, it broke the antenna off.”

The two dozen men aboard the gliders were supposed to attack German defenses and work to keep roads and bridges open for troops headed in from the beaches. Within minutes of landing, his unit was under fire.

"We fought for 33 days and nights without relief; it was on-the-go all the time," Riddle recalled.

Now 98 years old, he said he can never forget that date.

“People say, 'How in the world can you remember those dates and things?' They’re branded in my brain,” he said.

10News has kept up with Riddle for several years. A crew went with him in 2014 as he returned to Normandy to mark 70 years since the attack.

He had also returned for the 50th anniversary of the invasion.

This year, he's traveling back to France again, 75 years later. He said he’s looking forward to going back and seeing old friends there.

Former Tennessee Adjutant General Terry "Max" Haston also made the trip to the beaches of Normandy, representing Tennessee at Omaha Beach as the sun rose over the water. You can see the scene from the beaches in 2019 in the gallery below. 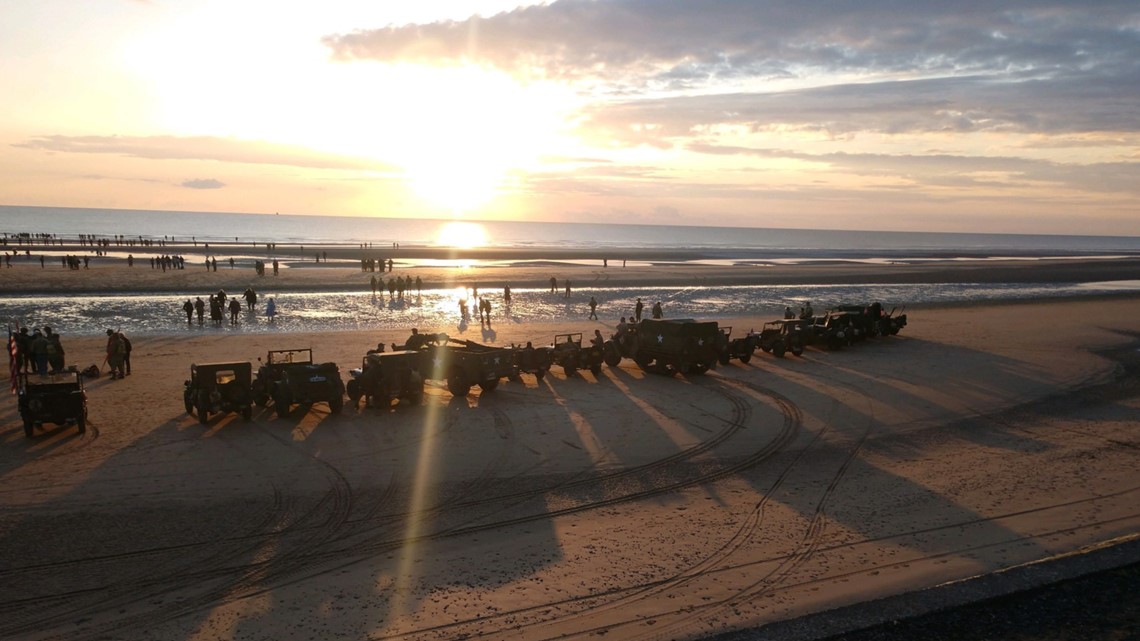 The effect on East Tennessee

Mr. Riddle’s story is not uncommon. Experts say there were many East Tennesseans in Normandy on June 6, 1944.

Almost 4,000 troops from 35 East Tennessee counties died over the course of the war. 228 died during the Normandy campaign alone.

John Romeiser, a caretaker of the East Tennessee Veterans Memorial, said those numbers were, in some ways, surprising.

“World War II was fought in so many different parts of the world,” he said. “Some of the small counties had just one, but every county had at least someone who was there in Normandy who gave up their lives.”

Romeiser is one of several people in East Tennessee working to preserve the stories of World War II soldiers.

Cynthia Tinker, from UT’s Center for the Study of War and Society, is also working to find and save those stories.

Since the center was founded in 1984, it has collected more than 300 interviews with veterans about their unique experiences. The center posts them online to give people a glimpse into the day-to-day life of the soldiers or of specific battles like D-Day.

“I do this for a living because my granddad would never talk about his service,” she explained. “I do remember him saying some of that stuff shouldn’t be talked about.”

Tinker believes everyone who serves has a unique experience, and that the purpose of her work is to preserve each one.

The center also collects boxes of family heirlooms that include items like handwritten letters, official military telegraphs and even a gold-plated Bible carried into battle. Those pieces of history are used to piece together the sometimes-forgotten stories of the veterans to whom they belonged.

It is impossible to tell the stories of every East Tennessee veteran who served on D-Day, but research like Cynthia Tinker’s and the personal stories submitted by 10News viewers allow us to share a few of them.

Here are their stories.

The curators at the East Tennessee Veterans Memorial say Franklin survived the first wave at D-Day. He was just 18 years old and had already survived battles in North Africa and Sicily at that point in the war. His boat hit a mine and blew him into the water. He made it onshore, shedding his supplies so he could swim. Franklin survived the battle and traveled back to France much later in his life to share that story before his death.

Shearer parachuted into Normandy on June 6, 1944,  a submission to the 10News Honor Your Vet page, explained. He received two Purple Hearts, and returned to his unit both times. Shearer retired to Lenoir City and died in 2006.

McClanahan was from Maryville, according to his story on the Honor Your Vet page. He served across Europe during the war, including in the Normandy campaign. He retired as a decorated soldier and died in 2011.

Morgan joined the Army at age 19. His Honor Your Vet story says he arrived in Normandy after the initial invasion to deliver crucial supplies. He lived to return to Normandy years later with family.

Logan was a B-26 pilot on D-Day, according to a submission to the Honor Your Vet page about his story. He was awarded several decorations for his service and flew 66 combat missions over Europe.

Grosvenor served on the U.S.S. McCook, his story on the Honor Your Vet page says, one of the battleships that destroyed German guns on Omaha beach. His brother Charles served on the same ship.

The UT Center for the Study of War and Society has a box dedicated to Keenan. He parachuted into France on D-Day and was killed in action on June 6, 1944. His box holds a $10,000 life insurance payment to his family and condolence letters. Family letters in the box show his mother continued writing to him, even after he was reported missing. A telegram eventually told his family what had happened.

Curators of the East Tennessee Veterans Memorial say 30-year-old Stephens was one of more than two dozen locals who died on D-Day. They believe the Blount County native was fighting on Utah beach before he died.

Foust’s family found out about his death in the newspaper two days after the initial attack, John Romeiser at the East Tennessee Veterans Memorial said. His ship, the U.S.S. Reich, had exploded after it hit a mine.

Brannan, a Morristown native, was part of the third wave on ‘Bloody Omaha’ beach. He survived, and 10News followed Brannan on his return to Normandy in 2014. A grenade blast took part of Brannan’s hand during the battle. He returned to England on a hospital ship. He passed away at the age of 98.

Tap the names for more information on these veterans.