Tennessee voters will have a choice to make in November. How will Karl Dean and Bill Lee work to win their votes for governor? 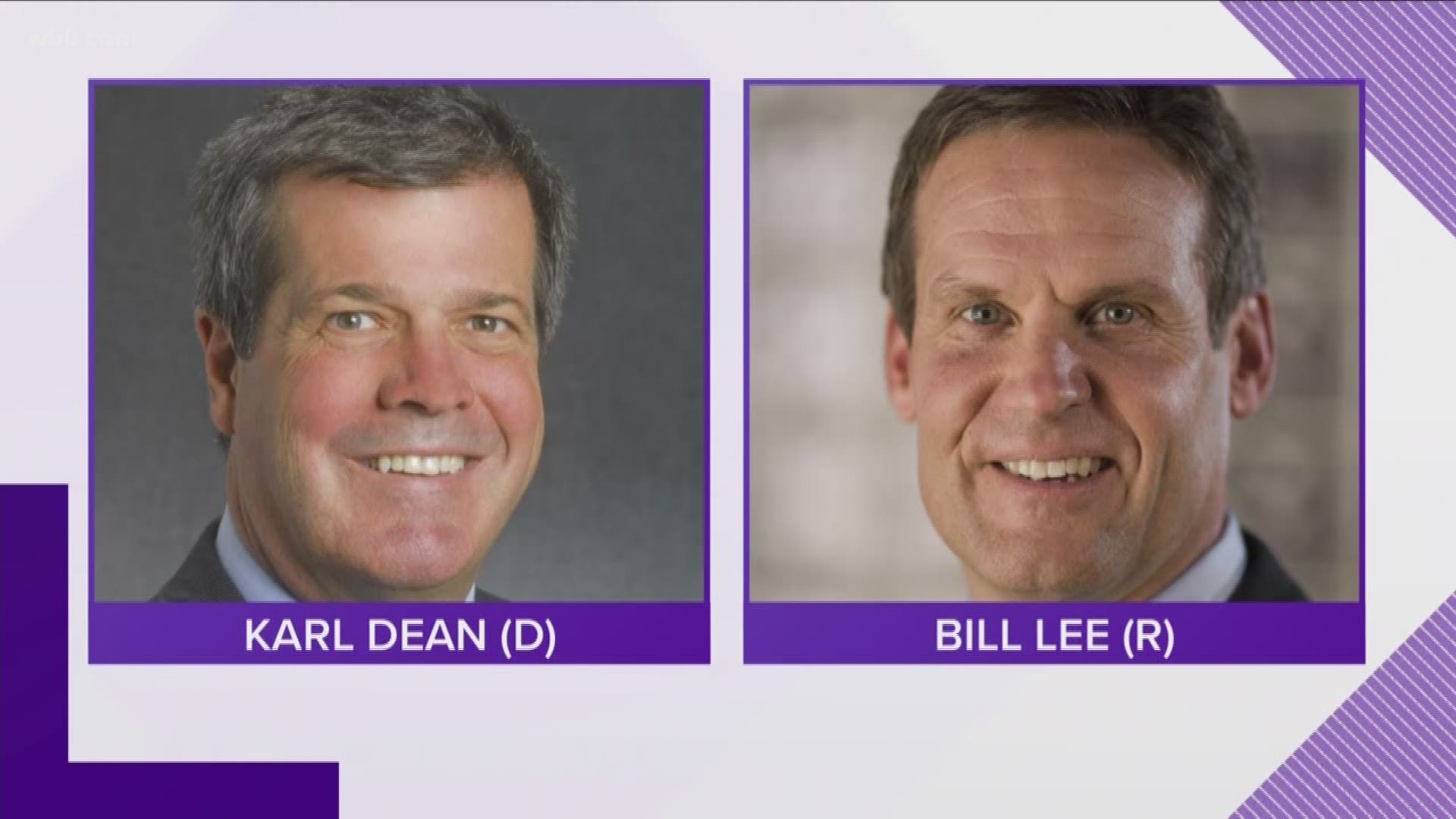 One candidate spent three decades growing his family’s home services and construction company based in Franklin.

The other worked almost entirely in government over the same period of time, first as a public defender, then as Nashville’s top attorney, then as its mayor.

The race between Republican gubernatorial nominee Bill Lee, chairman and former CEO of Lee Company, and Democratic nominee Karl Dean, former mayor of Nashville, pits two men with mild-mannered temperament and tone against one another.

They are just four years apart in age, but they’ve taken dramatically different paths to get here.

Each will now lean on their biographies — Lee touting his personal story and a plan to take Tennessee from good to great, Dean casting himself as the one with proven experience — as they pivot to the final three-month stretch to replace term-limited Gov. Bill Haslam.

Lee heads into the Nov. 6 general election as the likely favorite given the state’s recent Republican dominance. But Dean, mayor of Nashville from 2007 to 2015, is the most formidable candidate Democrats have fielded for governor since 2006, when voters reelected Gov. Phil Bredesen.

Dean, who has decried “hyper-partisanship” in his campaign, has run as a “pragmatic, commonsense, get-it-done” Democrat, not an ideologue. He’s been out to emulate the type of centrist campaign that has put Bredesen in strong position in his race against U.S. Rep. Marsha Blackburn for the U.S. Senate.

But he faces a challenging race against Lee, whose evangelical appeal and business stripes proved a strong combination in the Republican primary. In the final weeks, Lee surged past both U.S. Rep. Diane Black and Knoxville businessman Randy Boyd, who were each considered frontrunners for most of the race.

“On the whole, the gubernatorial contest is the Republicans’ race to lose, but Democrats have a candidate of the right mold to be competitive,” said Geoffrey Skelley, associate editor of Sabato’s Crystal Ball at the University of Virginia.

"If things go well for Dean and the political environment is especially good for Democrats by November, he might be able to win.” 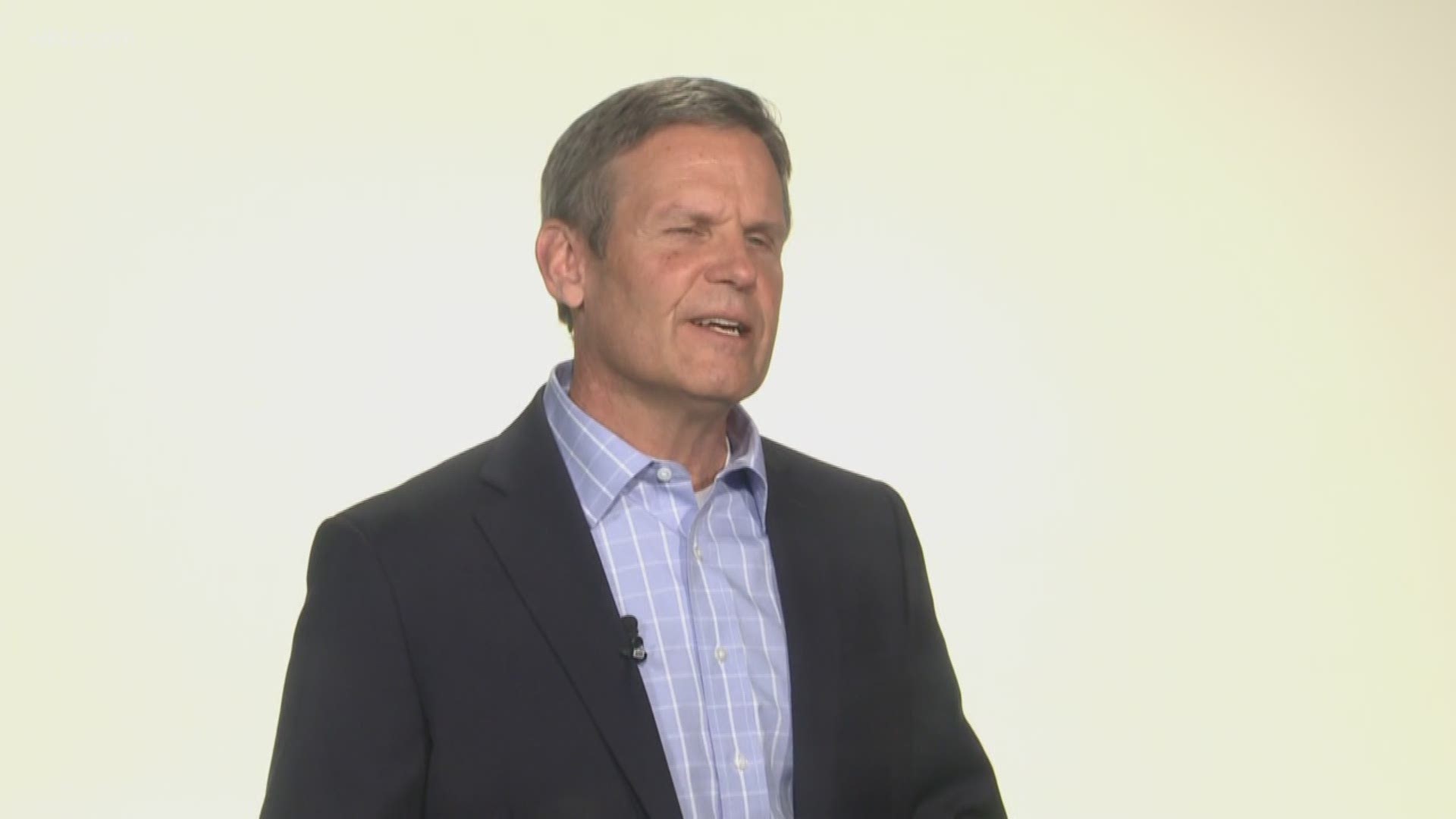 Lee, 58, wants to tell a story, one of personal tragedy and a vision for change.

In celebrating his election victory, the Williamson County businessman and farmer congratulated Haslam on his tenure while promising to build on his legacy.

"As every business leader knows, good can be the enemy of becoming great. And we can’t get comfortable, and we can’t settle and we can’t stop reaching for more," Lee said. "That's not me, and that's not Tennesseans. We never settle for the status quo."

Eschewing divisive social issues — the focus of much of the discourse during the GOP primary — Lee instead laid the groundwork for a campaign focused on reducing rural poverty, increasing access to addiction recovery services and reducing the state's recidivism rate.

"Thank you for believing in a positive vision for the state of Tennessee,” Lee said at this victory party at The Factory at Franklin. “Thank you for choosing leadership over politics.”

Lee, who won his first election with Thursday’s primary win, is the definition of a political outsider.

"If I were the Karl Dean (campaign) I would not have wanted to face him," Franklin said. "I wanted to face Diane Black, because that personal story could give him a certain sensibility with voters that the other candidates don’t have." 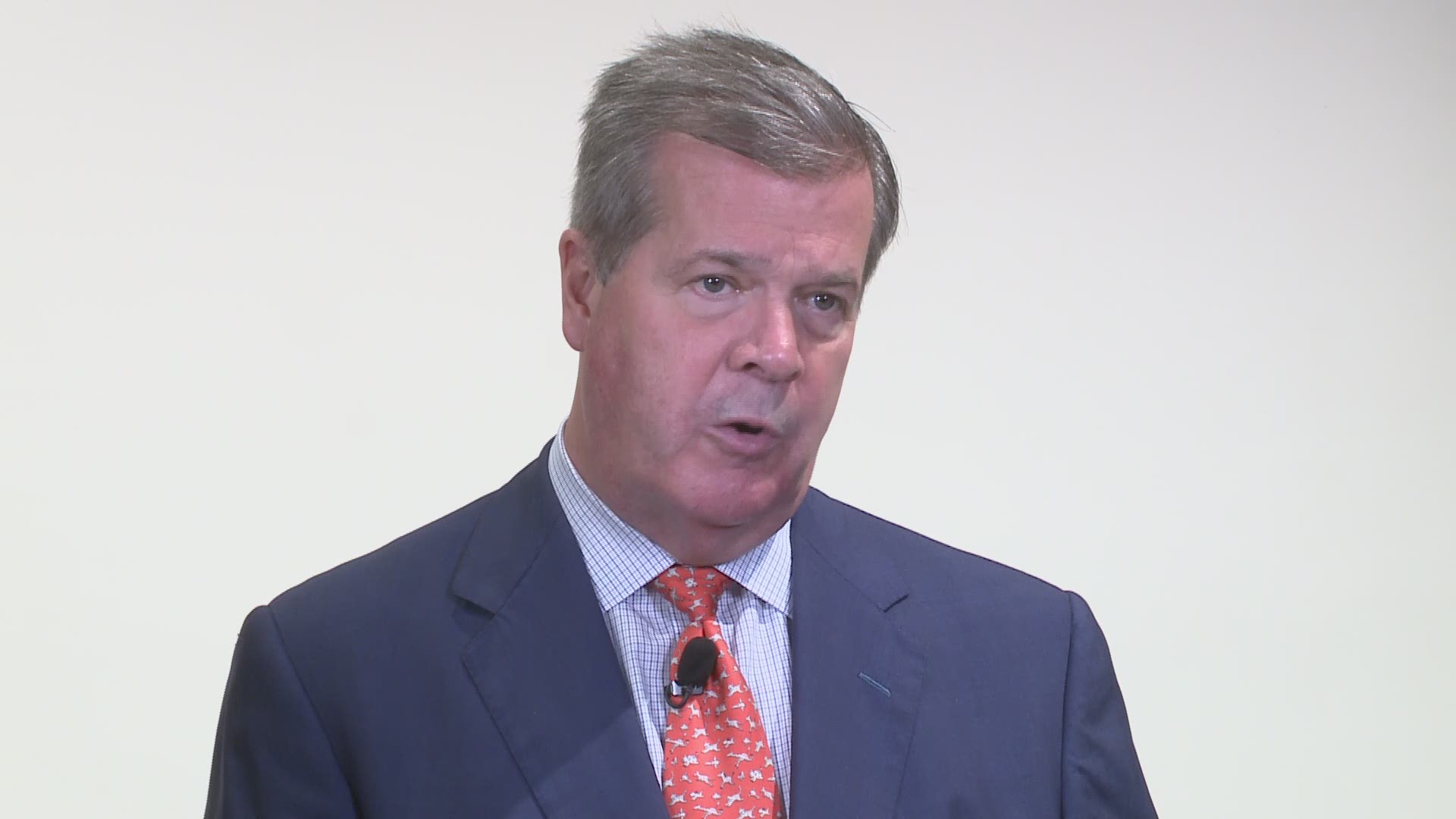 To counter, Democrats have signaled they intend to tout Dean as the only candidate with the experience to take on what they believe are their winning issues in a red state.

That includes his call for Medicaid expansion — an area that Republicans in the state legislature have resisted. He's regularly highlighted 11 rural hospitals that have closed as a result of funding issues.

It's part of his pitch to blue-collar voters that he can bring economic vibrancy experienced in Nashville to rural parts of the state, which he’s called “forgotten Tennessee.” In addition to jobs, Dean has also touted education, including greater funding for teacher pay.

"Tennessee has a tradition where every eight years we alternate the party in the governorship," Dean told reporters Thursday when asked why he thinks he can win in a conservative state.

"I think our state's more moderate than people really understand," he said. "And I think people want somebody who's going to be practical and pragmatic and get things done."

Parties set out to define opponents

Both candidates are in position to self-fund a portion for their campaigns, with Dean already contributing $1.4 million toward his campaign and Lee giving $5.2 million to his, mostly through loans.

Although Dean and Lee both ran positive primary campaigns, their respective parties are out quickly to define the opponent.

The Tennessee Democratic Party seemed to preview one line of attack in a statement Friday.

“We’ve seen what happens when a ‘business outsider’ is elected to office,” the statement said, pointing to Tennessee’s inaction on Medicaid expansion and President Donald Trump's tariffs, unpopular among many of the state's farmers.

“Bill Lee may be a nice guy, but Karl Dean listens to the people and has a track record of proven leadership,” Tennessee Democratic Party chairwoman Mary Mancini said. ”That is how Karl Dean gets results and is able to work across the aisle to get things done.”

Republicans will look to paint Dean as a liberal — an effort that got underway after he secured the nomination.

“Democrat Karl Dean is just another left-wing, big-government politician who will break his promises, dodge accountability and raise taxes,” Jon Thompson, a spokesman for the Republican Governors Association, said in a statement.

He called out Dean for supporting a property tax hike as mayor and Nashville's increased debt load under his watch.

"Karl Dean will take Tennessee backwards, and his record makes it clear that he simply does not believe in the policies that have made Tennessee the economic engine it is today."

In 2011, Lee donated $250 to Dean's mayoral reelection campaign, a contribution that his Republican opponents criticized during the primary. Lee, whose company has contracted with Metro and other governments, defended the transaction as a "business decision." He also donated to former Mayor Megan Barry and Bredesen in the past.

Disagreement on Dean's chances against Lee

Dean’s socially progressive record as mayor could open himself up to further Republican attacks.

For example, he supported a nondiscrimination policy for gay, lesbian and transgender employees of city contractors, opposed a state bill allowing guns in parks, and successfully fought a referendum to make English the official language of Nashville's Metro government.

Each were popular positions in Democratic-leaning Nashville, but they might not play as well in more conservative rural parts of the state.

While Lee touted few socially conservative positions during the primary campaign, he does support so-called "bathroom bill" policies that would in theory prevent transgender individuals from using the bathroom of their choice.

He was far more vocal about his views on gun rights: he supports arming teachers and allowing people to carry guns without going through a state-monitored permitting process.

Lee also could face scrutiny for his time leading The Lee Company, like anyone who leads a large organization may and as he did during the final stages of the GOP primary.

Republican strategists say the dynamics just aren't there for Dean to win unless something unforeseen arises.

“If you look at the strength of Lee’s victory last night, and you look at the political make-up of the state, Dean almost has to count on Lee to make a mistake,” said veteran Republican strategist Tom Ingram.

He said the race features “two good candidates and “two proven executives” and two campaigns that will be adequately funded.

“In a balanced voting population, it would be a very competitive race," he said. "In a state as conservative and as Republican as Tennessee, it’s going to be a very difficult race for any Democrat, even a good one.”

But Charles Robert Bone, a Nashville attorney and the Dean campaign’s finance chairman, said “historically Karl Dean’s profile is the type of person we’ve elected as governor” — framing him as “moderate, successful mayor” like Haslam and Bredesen.

"I think he has something that Bill Lee doesn't, which he has proven experience," Bone said. "That is proven experience that he can talk about all over the state as it relates to investing in education and strategic investments in economic development. And he has the right plan on the health care, expanding Medicaid etc., that I don't think Bill Lee will embrace. I don't think his party will allow him to do so."

Will Bredesen on ticket boost Dean?

The tandem of Dean and Bredesen puts two former business-friendly Nashville mayors at the top of the Democratic ticket, but it's unclear how much they will campaign with each other.

Some Democrats and political observers have theorized that Dean could get a boost just from being on the same ticket as Bredesen — both in driving higher turnout in the state’s two Democratic centers, Nashville and Memphis, and perhaps helping Dean attract some Republicans to his side.

Bone said Tennessee Democrats, for the first time since 2006, will benefit from a "very well organized, very well funded," coordinated campaign that starts with Bredesen and goes down the ticket.

To win in November, Tennessee Democrats are looking to capitalize on what they hope is a national revolt against Trump that trickles down to Tennessee. Trump won Tennessee in the 2016 presidential election with 61 percent of the vote.

Franklin believes there's chance some of the national "blue wave" of Democratic opposition to Trump could help both Dean and Bredesen.

Organizing is in its early stages, Franklin said, but if progressive or typically less-active voters come together to create a network of support for both candidates, that could deliver the increased voter turnout Democrats desperately need to win.

When Bredesen was last on a Tennessee ballot in 2006, Democrat Harold Ford Jr. came 3 percentage points from beating Republican Bob Corker for the U.S. Senate.

But Republicans don’t see a Bredesen bump for Dean.

“I wouldn’t count on coattails,” Ingram said. “This state’s always been very good at splitting its vote and electing different people to different offices. The Bredesen-Blackburn matchup is very different than the Dean-Lee matchup.”

Nashville-based public relations and political consultant Joe Hall, who has been working for Lee’s campaign, called them “two distinct races that people will consider separately.”

“Karl’s a good candidate but he’s got very much an uphill challenge in that statewide this is still very much a red state," he said. "I think last night only reinforces the positive conditions for a high-quality Republican candidate like Bill Lee in a statewide race.”

Democrats had crossed their fingers for Black, a hardline conservative who ran entirely on pushing Trump’s agenda, to win the Republican primary.

They were convinced a Black nomination would give them the best chance, particularly with Bredesen in a tight race for U.S. Senate against Blackburn, another conservative congressman whose politics align with Black.

Still, many political insiders see better odds with Lee than Randy Boyd, a Knoxville businessman and former commissioner under Haslam, who finished second.

John Geer, co-director of the Vanderbilt Poll, said an interesting dynamic will be whether Lee's primary message will work in a general election against Dean.

"Bill Lee has a been a little vaguer," Geer said. "We’ll see if Bill Lee tries to flesh out some of his views more or he continues this kind of personal narrative. Time will tell."