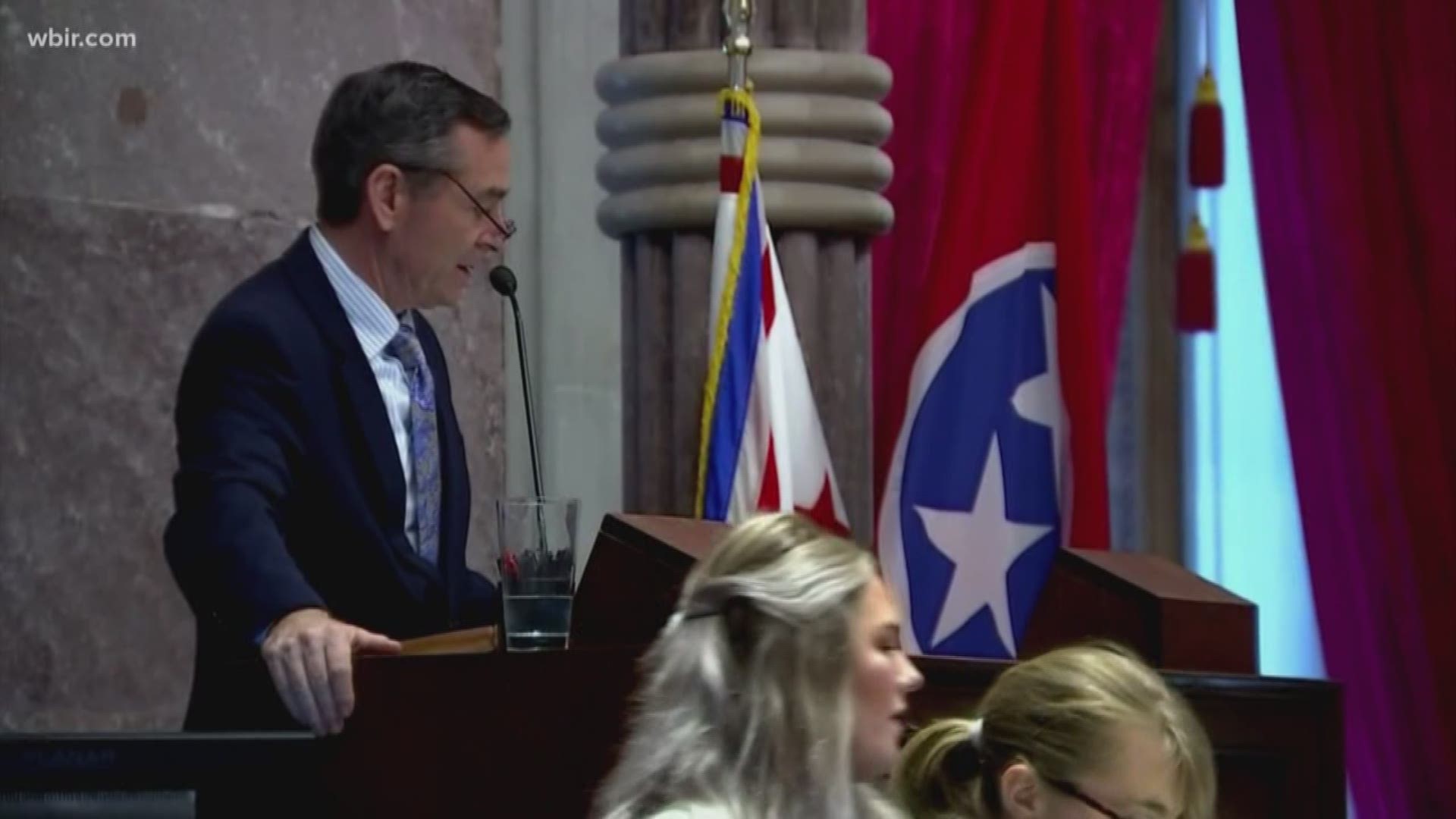 KNOXVILLE, Tennessee — Some Tennessee lawmakers out of favor with House Speaker Glen Casada were shadowed by "hall monitors" who tried to eavesdrop on their conversations, sit near them, even follow them at lunch, two Knoxville area lawmakers said.

"I knew it the whole session, and I had been told by some people, some staff in different offices, Oh, this person has been assigned to you, Gloria," House Democrat Gloria Johnson of Knoxville said during a taping of WBIR's "Inside Tennessee" that airs this Sunday morning.

"But I was afraid to talk about it because it sounds so paranoid."

Jason Zachary, a Knoxville Republican, confirmed what Johnson said was true because it happened to his friend and fellow East Tennessee lawmaker Jeremy Faison of Cosby, who sometimes crossed swords with the embattled Casada.

Credit: AP
FILE - In this May 1, 2019 file photo, House Speaker Glen Casada, R-Franklin, stands at the microphone during a House session in Nashville, Tenn. Casada announced Tuesday, May 21, 2019 he plans to resign from his leadership post following a vote of no confidence by his Republican caucus amid a scandal over explicit text messages. (AP Photo/Mark Humphrey, file)

"I believe that actually did happen, I really do," said Zachary, who joked he and Johnson often disagree but were in agreement in this instance.

Johnson, at more than 6 feet one of the tallest members of the General Assembly, sometimes would be ignored by Casada during debate, even as she stood on the House floor.

She said she noticed the "monitor" assigned to her would sit in a cubicle outside her office and even follow her when she went three blocks away to get lunch.

That same person ended up being assigned to Faison, she said.

RELATED: 'It may turn out to be my duty': Knoxville rep. Bill Dunn willing to be House Speaker when Casada resigns

RELATED: Tennessee Speaker of the House to resign amid controversy

Zachary said he noticed it.

"You could see when you're having a conversation on the fifth floor and the person walks by three different times when you're having a conversation with a Jeremy Faison or others that you know you feel like are being watched, and then you walk outside of your office and a couple of these people who were supposed to be hall monitors would turn around and walk off when they're leaning against your wall.

"You begin to wonder. And then on the House floor, you could feel it, too."

Johnson said her monitor "stood most of the time right behind my desk" on the floor.

Longtime Republican leader and organizer Susan Richardson Williams, a WBIR panelist, raised the issue with the "Inside Tennessee" guests because she'd heard from some Republicans that Casada was directing it.

Casada, R-Franklin, this week agreed to resign the speakership in early June when he returns from a vacation. He's been under scrutiny for bullying tactics against the public as well as House members and for trading sexist texts in the past with his former chief of staff Cade Cothren, who was paid $200,000 to work for Casada. The Tennessean reported this week Casada spent more than $45,000 to renovate his office space in the Cordell Hull Building in Nashville, also spending more than $11,000 to install a white noise machine system inside and outside the rooms.

Also on the show, state Rep. Bill Dunn, a Knoxville Republican and the speaker pro tempore, addressed allegations regarding state Rep. David Byrd of Waynesboro, who has been accused by three women of sexual assault in the 1980s when he was a high school coach and they were students.

Dunn said he is convinced something happened to the women and he's told them that.

You can watch the full program, which focuses on Casada and Dunn's leadership plans, on WBIR, Channel 10, at 9:30 a.m. Sunday.