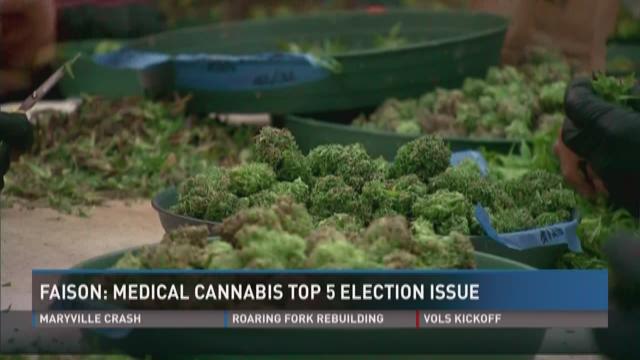 Tennessee’s gubernatorial election is still over a year away, but with a newly appointed committee on medical marijuana, Representative Jeremy Faison, R-Cosby, expects cannabis to play a large role in the election.

“Obviously we see jobs and infrastructure as probably going to be number one, and abortion and gun rights are way up there when it comes to Republican values,” Faison said. “I do see a lot of sick people making this issue a top five issue for candidates.”

Faison and Dickerson have sponsored bills for medical marijuana in previous legislative sessions, and Faison believes the workshop will persuade skeptical lawmakers to support medical marijuana.

The committee was appointed by House Speaker Beth Harwell and Lt. Gov. Randy McNally. Faison said the chamber leaders strategically chose lawmakers they felt would be instrumental at either stopping or pushing forward the topic.

“It’s an election year and this is exciting,” Faison said. “The reason it's come all the way to the Republican side is because the people of Tennessee are ready for this.”

Recently Speaker Beth Harwell, R-Nashville, told a group of Republicans that she is open to considering medical marijuana after her sister in Colorado effectively used cannabis instead of opioids following an injury.

Faison says is supportive of Harwell and thinks her openness to medical marijuana will put pressure on other Republican candidates to give close thought to their stance on the subject.

"It's above 60 percent for every single Republican primary poll that we take," Faison said.

"There's a lot of independent minded people who could go either way, who don't really care about the Republican Party, don't really care about the Democratic Party - they just want common sense things that work," Faison said. "When you see a Republican embracing a common sense policy that's good for Tennesseans, I think you'll see a lot of independent Tennesseans coalesce behind that candidate."

10News reached on to gubernatorial campaigns to see where candidates stand on the topic.

Republican candidate Randy Boyd said he opposes recreational marijuana and believes that any potential medical uses must be fully tested and go through the FDA approval process.

Democratic candidate Karl Dean said he would be supportive of medical marijuana, but opposes recreational use. Dean also said he believes Tennessee should be guided medical professionals as it relates to medical marijuana.

Republican candidate Mae Beavers said she intends to hold the line against the culture of drug abuse and avoid political pandering.

Republican candidate Bill Lee's campaign said the candidate was out of the county on a mission trip and unable to be reached to provide a statement by deadline.

Other candidates did not provide a statement by deadline.

We will continue to update this story as we hear back from candidates.