The House voted Wednesday night to impeach President Trump on abuse of power and obstruction of Congress.

GRAND RAPIDS, Mich. — Lawmakers in Michigan are responding to the impeachment vote of President Donald Trump. Out of four West Michigan representatives, three voted against impeachment and voted for it.

The U.S. House voted Wednesday night on two articles of impeachment — abuse of power and obstruction of Congress — and both passed.

Meanwhile, Trump was in Battle Creek for a Merry Christmas rally. About an hour into the speech, Trump read out the results of the impeachment vote on Article II.

“So, we got every single Republican voting for us. So, we had 198, 229. We didn’t lose one Republican vote. And three Democrats voted for us,” he said to loud cheers in the arena. He then continued his critique of the impeachment.

This marks the third time a president has been impeached, and Michigan lawmakers are responding while defending their votes.

“Impeachment is one of the most consequential actions the House of Representatives can take,” said Congressman Huizenga. “Throughout this process, Speaker Pelosi and the Democrat Majority have broken historic bipartisan standards, denied the President due process, and moved the goalposts time and again in order to shape their desired narrative and outcome. The fact that 44% of my Democrat colleagues voted to impeach the President of the United States before the Ukraine Call on July 25th even took place exemplifies their partisan desire to remove this President.

“Our nation’s founders warned about using impeachment as a political weapon. Today, Speaker Pelosi ignored those warnings and the House proceeded with the most partisan and divisive impeachment vote in the history of our nation. The Democrats’ endless drive to impeach this President has further divided our nation and damaged the House of Representatives as an institution of government. By making the decision to abandon the Judiciary Committee and conduct the majority of the impeachment proceedings behind closed doors through the Intelligence Committee, Speaker Pelosi has set a dangerous and partisan precedent that will have a chilling effect on how constitutional matters are handled in the future.

“After reviewing the facts, I believe Speaker Pelosi, Adam Schiff, and their Democrat colleagues have failed to make their case for impeachment. In just under 11 months, the American people will go to the polls and have the opportunity to vote and make their selection for President. By engaging in a rushed, partisan process, Democrats are seeking to either overturn the outcome of the 2016 election or influence the 2020 election – neither of which should be acceptable to the American people.”

Amash (I-Grand Rapids) said on the House floor Wednesday he supported the articles of impeachment, not as a Democrat or Republican, "but as an American who cares deeply about the Constitution, the rule of law and the rights of the people.

"President Donald J. Trump has abused and violated the public trust," Amash said. "By using the high office to solicit the aid of a foreign power — not for the benefit of the United States of America, but for his personal and political gain — his actions reflect precisely the type of conduct the framers of the Constitution intended to remedy through the power of impeachment, and it is our duty to impeach him."

Moolenaar voted against the impeachment process and said in a statement Wednesday "(the Democrats) drive to impeachment has been so divisive, one moderate Democrat quit the party and joined the Republicans."

“As the representative for my constituents in mid and northern Michigan and I take my oath to uphold the Constitution seriously. I am concerned Democrats voted for impeachment with no bipartisan support because they have wanted to do it since Trump was elected. In fact, their drive to impeachment has been so divisive, one moderate Democrat quit the party and joined the Republicans.

"My constituents elected me to get things done and when they look at what the Democrats are doing in Washington, they see partisanship instead of solutions that will make a difference in their lives. It is unfortunate that Democrats put bipartisan Michigan priorities on hold and waited until the last minute to finish crucial bills that pay our military, protect the Great Lakes, fund the construction of a new Soo Lock, and finalize the new trade deal with Canada and Mexico that will level the playing field for hardworking Michigan residents."

Credit: AP
FILE - In this May 3, 2017, file photo, Rep. Fred Upton, R-Mich., left, speaks to reporters outside the White House in Washington. Upton, said he doesn't support a formal impeachment inquiry against President Donald Trump. But he has no problem with Democratic-led committees digging for more information. Upton told the Detroit Economic Club that "we need to know what the answers are." He shared the stage Wednesday, Oct. 2, 2019 with Democratic Rep. Debbie Dingell. (AP Photo/Susan Walsh, File)

Michigan's 6th district representative didn't issue a statement following the House vote. But a week before the impeachment vote, Upton said he was not planning on voting for the articles. He issued this statement at the time explaining his vote:

"Regrettably the impeachment process has become exactly what our great founding fathers warned us against. It has been highly partisan and clearly motivated by what I believe is an attempt to overturn the last election. I get it. Democrats aren’t happy with the result. But the time to vote on the next President is next November, not next week.

Within 24 hours of President Trump’s election, efforts began to impeach him. We can’t have the impeachment process decided by political whim. It must be decided by the standard set by the founders of our democracy.

The President’s behavior was wrongheaded, inappropriate, and ill-advised, but was it impeachable? My answer is no.

I might add I voted against the abuse of power article of impeachment against President Clinton for many of the same reasons.

Many times throughout history Presidents have demanded executive privilege. The Constitution establishes an independent judiciary for a reason, to settle disputes between the Executive Branch and the Legislative Branch. Since the courts have not ruled in this situation, obstruction of Congress is premature.

After these votes, we need to work on bridging the partisan divide in this country. We can’t rewind; we need to reset. Together, we need to focus on what the American people really want us to focus on, solving problems that actually impact their lives.”

Now that the House has approved the articles of impeachment, they will go to the U.S. Senate for a trial. Michigan's senators issued statements Wednesday night in response to the news of impeachment.

“I approach the impeachment trial with great seriousness and a heavy heart. One of the hallmarks of my work as an elected official is my commitment to bring people together to solve problems. That’s why it is so disheartening to watch as this impeachment debate intensifies the division between people in Michigan and across our country.

“The fact is, we are where we are because of the actions of President Trump. His behavior and abuse of power have forced the hand of everyone who cares deeply about our country, the truth, and the integrity of our democracy. It is my constitutional duty to thoughtfully consider the articles of impeachment, listen to the evidence, and make a decision that honors our nation’s values and our fundamental belief that no one is above the law. That’s what I intend to do.

“While this impeachment debate may have further divided the people of our state, I intend to continue to focus on the issues that bring us together – like protecting our Great Lakes, lowering the cost of prescription drugs, and helping create good-paying jobs. While this impeachment trial moves forward in the Senate, I will not lose my focus on these important issues.”

“I swore an oath to defend the Constitution as an officer in the U.S. Navy Reserve and when I became U.S. Senator — and I will fulfill my constitutional responsibility in the Senate. Abuse of office and obstruction of Congress are very serious charges that deserve solemn consideration. We must have a fair and non-partisan process, and I will thoroughly evaluate the facts that are presented to the Senate.

“But let me be very clear, my focus on the people of Michigan will remain steadfast — protecting people with preexisting health conditions and passing legislation to lower prescription drug costs; expanding vocational training programs so everyone has the skills needed for good-paying jobs; and advancing additional efforts to protect the Great Lakes and our drinking water.” 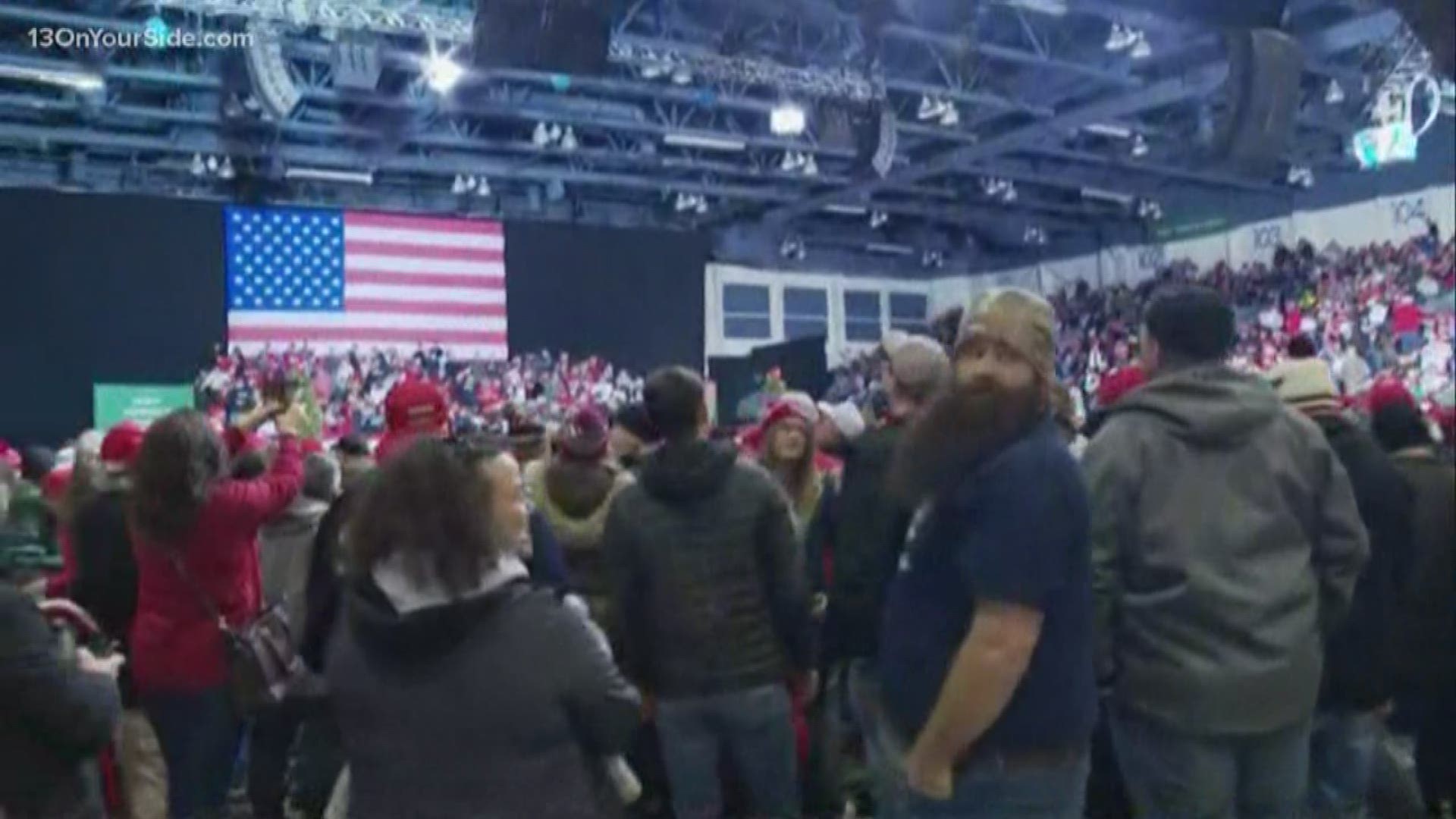