The new spot at the state museum will provide historical context to the controversial bust. 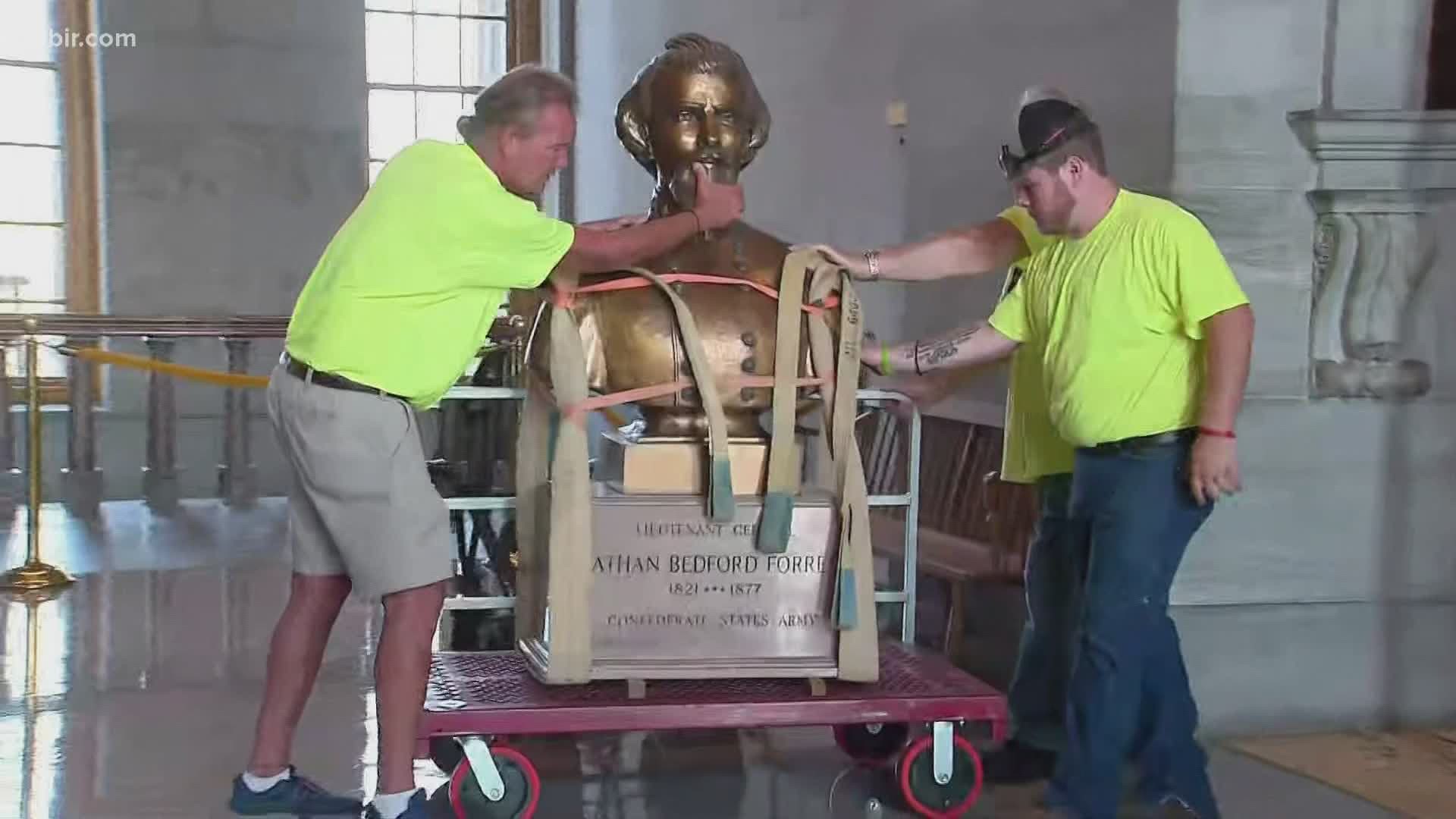 NASHVILLE, Tenn. — The bust of Confederate general and early Ku Klux Klan leader Nathan Bedford Forrest will go on display at its new spot inside the Tennessee State Museum Tuesday.

Forrest's bust will be displayed at the museum alongside the busts of U.S. Admiral David Farragut and U.S. Admiral Albert Gleaves after all three were removed from the Tennessee state capitol Friday.

The new spot at the state museum will provide historical context to the controversial bust.

A decades-long effort to remove a bust of a Confederate general and early Ku Klux Klan leader from the Tennessee Capitol has finally come to fruition.

Crews are relocating three busts, including Nathan Bedford Forest, from the state capitol to the Tennessee State Museum on Friday morning.

The removal of the busts, which weigh up to 3,000 pounds each, started before 8 a.m. The cost of removing the busts will be around $17,000 and is covered by the State Museum.

The three busts will be on display for public viewing at Tennessee State Museum during regular business hours.

The Forrest bust was first installed at the Capitol in 1978 and has sparked protests and demonstrations ever since.

Earlier this year, Tennessee's Historical Commission voted 25-1 to move the three busts just north of the Capitol building to the state's museum, noting it was better equipped to furnish the appropriate historical context.

“There has only been one perfect person to walk on this earth – everyone else has fallen short. Our country was established by imperfect people who made a great country that stands for hope, opportunity, and liberty.

“Trying to judge past generations’ actions based on today’s values and the evolution of societies is not an exercise I am willing to do because I think it is counterproductive.

“It is much more productive to learn from our past and not repeat the imperfections of the past. Any attempt to erase the past only aligns society with the teaching of communism, which believes the present dominates the past.

“From the very beginning, the legislature has tried to follow the process and procedure in a respectful manner, and we did that today. Moving forward, the legislature will be working on revising current law to include a more significant voice of those elected.”

Admiral David Farragut was an accomplished U.S. naval officer, who received great acclaim for his service to the Union during the American Civil War. He was from East Tennessee and the town of Farragut was named for him. Farragut commanded the Union blockade of Southern ports, helped capture the Confederate city of New Orleans and provided support for General Ulysses S. Grant’s siege of Vicksburg. Farragut is best known for his victory at the Battle of Mobile Bay in August 1864, during which he commanded his fleet to ignore Confederate defenses in the harbor, famously proclaiming “Damn the torpedoes, full speed ahead!”