Phil Bredesen could be 'game-changer' in Tennessee US Sentate race

National political observers are now circling politically red Tennessee, believing that if Bredesen runs, Democrats could look to make it the key third state they need to flip to win a Senate majority. 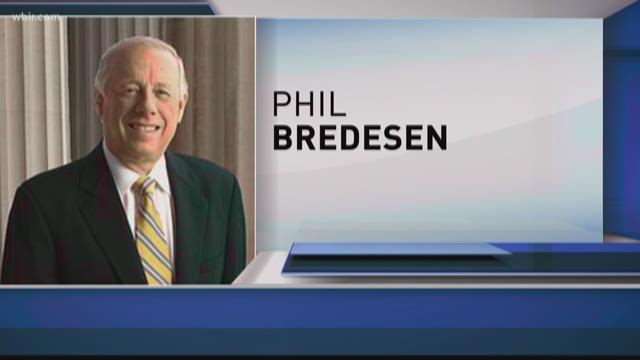 Democrat Phil Bredesen’s sudden interest in running for U.S. Senate has emerged as a potential game-changer in Republican-dominated Tennessee, leading political analysts to see a new path for Senate Democrats in Washington to try to take control of the upper chamber.

RELATED: Haslam announces he will not run for U.S. Senate

MORE: Peyton Manning not interested in being a politician

It seemed improbable just weeks ago that the former Tennessee governor — who left office in 2011 and has stayed largely out of the spotlight since — would re-enter politics.

But now, some Democrats are privately growing optimistic that, after he initially ruled it out, he’s moving toward a run for the seat, held by retiring Republican Sen. Bob Corker.

Tennessee Democrats, who haven’t won a U.S. Senate race since 1990 and haven’t competed closely since 2006, overwhelmingly see the 73-year-old Bredesen as their best — some say only — chance to beat either Republican U.S. Rep. Marsha Blackburn or former Rep. Stephen Fincher.

National political observers are now circling politically red Tennessee, believing that if Bredesen runs, Democrats could look to make it the key third state they need to flip to win a Senate majority.

“Clearly, he would be a game-changer of a candidate,” said Nashville attorney Charles Robert Bone, a prominent Democratic donor who is among those encouraging Bredesen to run. “He would bring instant credibility and momentum.

“There are lots of Democrats, and people of both parties and people across Tennessee, who have asked him to take a hard look at this because they want pragmatic, responsible, leadership coming out of Tennessee.”

A toss-up race with Bredesen running?

Bredesen — a political moderate, who occasionally irritated liberals in his party over cuts to TennCare and other issues — is the last Tennessee Democrat to win a statewide election, doing so in 2006 by capturing all 95 of the state’s counties. Many of these counties haven’t voted Democrat in any statewide race since.

The wealthy former Nashville mayor, who made his money in the health care industry, became known for his middle-of-the-road, fiscally conservative politics. He defied the downward trend of Democratic candidates in the state, in part by attracting support from some moderate Republicans.

Political analyst Charlie Cook of The Cook Political report said Tennessee’s Senate race “becomes a toss-up” if Bredesen runs and that the seat would likely remain Republican if he does not.

Cook made the forecast in a column last week that predicted a Democratic Senate majority “hinges on Tennessee” if he enters. That’s assuming Democrats pick up gains in two other states and hold on to 25 seats where Democratic incumbents are running again.

“Until now, it was difficult to see how it would be possible for Democrats to win a majority,” Cook wrote. “It’s still a steep climb, but if former two-term Democratic Gov. Phil Bredesen runs in Tennessee, as he may well do, Republicans could plausibly lose their majority.

“It’s hard to see how any other Democrat could win in Tennessee, even in a good year for the party,” Cook added. “Bredesen’s decision, combined with Corker’s earlier decision to abide by his pledge to serve only two terms, make the Volunteer State the pivotal one if Democrats are to have any plausible path to a Senate majority.”

Nashville attorney and Iraq War veteran James Mackler is the lone Democrat seeking the party's nomination for Senate. Chattanooga Mayor Andy Berke, who has been mulling a bid, has been quiet since Bredesen said he might enter the race. Through a spokesman, Berke said he is still considering.

Bredesen, governor from 2003 to 2011, has regrouped with his inner circle of past political advisers as he weighs his decision.

He fielded questions from a gaggle of reporters on Oct. 17 about a possible run, saying he owes it to other Democratic contenders, including Mackler, to make a decision soon.

“Considering is the operative word,” Bredesen said, adding that he decided to reconsider after getting calls from people urging him to run, including from some moderate Republicans.

“It’s not something that I ever contemplated doing going back, but I’m concerned about where the country’s going, and maybe there’s a role for me to play, maybe not,” Bredesen said. “We’ll decide in the next few weeks.”

Byron Trauger, a Nashville attorney and past Bredesen adviser, said Bredesen, a former physics major in college, brings a “scientific approach” to major decisions like this one.

“He analyzes the facts, he weighs the alternatives, and he decides major issues in a mature way,” he said. “He doesn’t approach major decisions flippantly or lightly. That’s just who he is.”

Trauger said he doesn’t know whether Bredesen will run.

“As a citizen, as a patriot, I hope very much that he does. As his friend, I am ambivalent. It’s an awful lot to ask of someone to undertake.”

Nashville businessman Bill Freeman, a one-time rival of Bredesen, was the first to publicly urge Bredesen to run for Senate after Corker announced he would retire. A “Draft Bredesen” website later formed.

If Bredesen runs and wins the party’s nomination, some Democrats see a clear contrast if the centrist Bredesen faces Blackburn, who has embraced the politics of President Donald Trump and is campaigning toward the populist, hardline wing of the Republican Party.

Trump won Tennessee last year with 61 percent of the vote and a 26 percentage-point margin. But a recent poll from Middle Tennessee State University last week found his approval rating is now 50 percent.

Republican commentator Bill Kristol, a critic of Trump, tweeted last week that he believes Democrats would have a “decent shot at a pickup” if Bredesen were to run against Blackburn or Fincher.

But while Democrats hope to capitalize on a midterm revolt nationally against Trump, it’s unclear whether that will materialize, particularly in southern states like Tennessee.

It’s also unclear whether Bredesen still has the same political clout in a state where he hasn’t campaigned in 11 years and where the Democratic brand has eroded, in rural parts of the state in particular.

Tennessee Republicans have taken notice of a possible Bredesen campaign.

The Tennessee Republican Party last week tweeted a graph on the state’s unemployment rate over the past decade. On one end was a photo of Bredesen with an arrow to 11 percent unemployment in 2009. On the other was the face of Haslam with an arrow pointing down to 3 percent.

“It also speaks volumes about their party. While they work to convince someone who hasn’t run for office since 2006, to be a candidate in 2018, Tennessee Republicans are working to build on our record of electoral success.”

Kent Syler, a political science professor at Middle Tennessee State University, said a Bredesen run “would tell whether a center is left in Tennessee politics.”

He said if Bredesen can’t win, “then you can assume no Democrat can.”

“I think it’s pretty obvious, whether it’s Fincher or Blackburn, the Republican Party’s nominee is going to be pretty far right. So, the question for Phil Bredesen is are there enough Democrats left, and can he attract independents, and can he peel off a few moderate Republicans?

"That's the political equation that he's got to solve in order to make a decision," Syler said.

A Bredesen candidacy would almost certainly attract fundraising assistance from Democrats on a national level.

In the past, the leadership of the Democratic Senatorial Campaign Committee tried to recruit Bredesen to run in contested U.S. Senate elections against Corker and Sen. Lamar Alexander, R-Tennessee. Bredesen declined.

The DSCC did not return a request for comment on whether its leadership urged Bredesen to run in 2018.