In a statement sent to University of Tennessee faculty, Boyd announced that he and Senator Mark Pody do not agree on numerous issues. 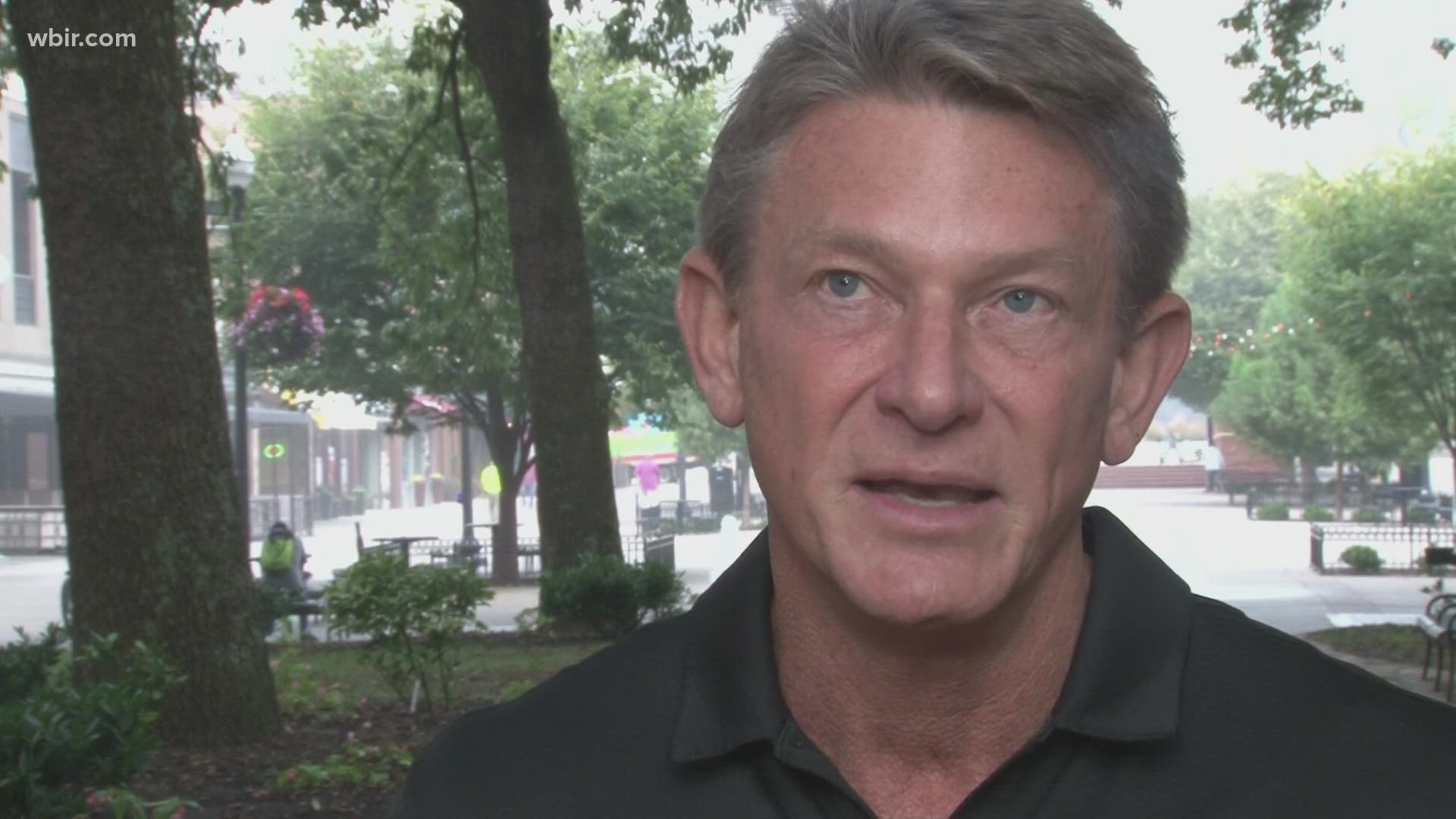 KNOXVILLE, Tenn. — UPDATE (10/12/21): University of Tennessee President Randy Boyd apologized Tuesday, saying it was a "mistake" to offer to pay for breakfast at a fundraiser for controversial Middle Tennessee Senator Mark Pody which listed Boyd as a host.

"I made a mistake by offering to pay for breakfast at an event for Sen. Mark Pody. I’ve learned a great deal from this situation and I apologize for the concern and confusion I have caused. It will not happen again," Boyd said on Twitter Tuesday.

Pody has been publicly against LGBTQ+ rights and supported an event that claims that widespread election fraud led to the inauguration of President Joe Biden.

Boyd said he has been meeting with the University Faculty Council, Knox Pride, and students -- saying he is working to schedule open dialogue with UT Knoxville's Student Government Association and the UT Pride Center to "understand the concerns of students."

"I want to ensure that I continue to address these concerns. I fully understand that I am held to a higher standard and must lead accordingly," he said. " Most important is that our students, faculty and staff understand that UT is an open and welcoming environment for all."

Most important is that our students, faculty and staff understand that UT is an open and welcoming environment for all. Please know I am available to hear your thoughts or concerns. Email me anytime at utpresident@tennessee.edu

In a statement to University of Tennessee faculty members on Sunday night, UT President Randy Boyd announced he is not hosting a fundraiser for controversial Middle Tennessee Senator Mark Pody:

"I have heard, understand and share your concerns. Let me first tell you what happened. Senator Pody is a long-time friend. We do not agree on numerous issues. For instance, I strongly support diversity and inclusion, including honoring and upholding LBGTQ rights and all University policies in that regard, and I think my record at UT these last three years speaks for itself. But Senator Pody is someone I have worked with for years. He asked for my personal help in Knoxville. I offered as a private citizen to pay for breakfast for a small gathering. Senator Pody mistakenly listed me as "hosting" the event on an invitation. But I have not solicited nor did I intend to solicit any contributions for him. I have not made a contribution to him either personally or through a PAC. I am also not attending the event and have decided not to pay for the breakfast. I understand the media coverage has raised legitimate concerns. I appreciate you taking the time to write to me and if you would like to meet and discuss further, I will make myself available any time.”

Boyd previously said on Friday that Pody had called and asked for his help and that he said yes in his role as a private citizen and not in any official capacity. But Monday, Boyd said he never actually intended to host the event.

On Monday, UT's Student Body President, Claire Donelan, wrote a letter to Boyd saying his actions "come into direct conflict with the University of Tennessee Knoxville's Strategic Vision to 'develop and sustain a nurturing university culture where diversity and community are enduring sources of strength.'"

In the letter, Donelan went on to suggest Boyd uphold the university's values by:

She also said that despite Boyd pulling support for the event, the intended actions were still hurtful.

"Students very much took notice and very much felt hurt by that decision. Him now not wanting to be a part of the event. I think he's listening to people's outcries about how hurt they do feel," Donelan said.

Victoria Scott, the vice president of Knox Pride, said she was disappointed to hear that the president of the university originally offered support for Pody.

"That's very sad for all the students that are LGBTQ+, that are currently enrolled at the university and for all of us alumni as well," Scott said.

Pody has taken numerous controversial stances on the LGBTQ+ community and has also endorsed events for the "Stop the Steal" movement. The movement led to an assault on the U.S. Capitol on Jan. 6.

In 2019, Pody also filed proposals to strip marriage rights from LGBTQ+ people. He said that the bill was meant to "defend" marriage "between one man and one woman regardless of any court decision to the contrary.”

He filed similar bills in previous years, and none of them passed.

In December 2020, he also posted an event encouraging people to attend a Wilson County "Stop the Steal" rally.

"We never [know] who might show up and you won't know unless you come," he said in the social media post.

Boyd said he was unaware of the public stances Pody had.

"I was not aware of his stance. And by supporting him, I hate that I've been implicated in supporting those causes," Boyd said.

Scott said she thinks it is difficult to act privately given Boyd's position as university president over more than 50,000 students, as well as his large public influence within East Tennessee.

"As a public figure, just because you try to take that stance and separate it from your profession doesn't mean that the community is going to perceive it that way," Scott said.

In August 2020, UT was ranked as the second-most LGBTQ-unfriendly university in the U.S., according to the Princeton Review.

Before the Pride Center was established on campus in 2010, it was up to the students to organize events for the LGBTQ+ community and be their own advocates, without any official organization through the university.

Scott is an alumnus from UT. She said things have changed since her graduation that helped make the campus more inclusive; however, to see UT still ranked so low was disheartening to her.

Since that time, students have watched the state legislature take action against inclusiveness on campus. Tennessee lawmakers also defunded the Pride Center in 2016 following controversies about pronouns. Officials also implemented severe restrictions about how the university could spend money on inclusiveness. 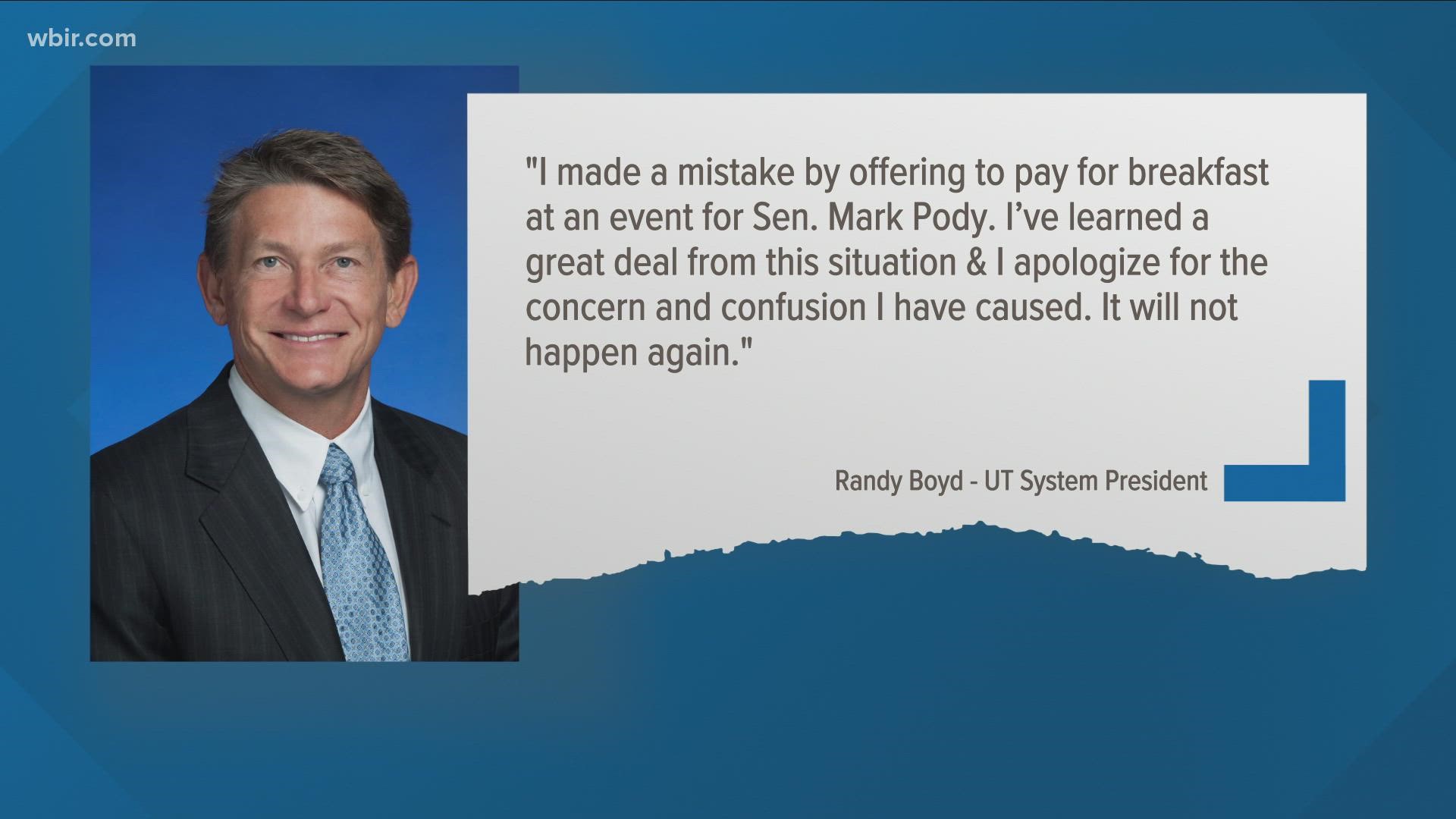 The law, which went into effect without former Governor Bill Haslam's signature, reallocated funding from the Officer of Diversity and Inclusion and gave it to a new scholarship fund and did not allow any funding or resources to go toward "the use of gender neutral pronouns, to promote or inhibit the celebration of religious holidays, or to fund or support sex week.”

Then-chancellor Jimmy Cheek denounced the state's decision, which removed the Pride Center as an office on UT's campus because it no longer was able to have faculty directing it.

Since then, the university has worked to be more inclusive on campus. The Pride Center has gotten additional funding, eventually hiring staff members. It also organizes many events such as annual "Friendsgiving" events and works to educate people about LGBTQ+ health.

Scott thinks Boyd's original decision could set the university back in its diversity and inclusion goals.

"It's very unfortunate that he would take that stance, and it doesn't bode well for the university, considering the fact that we were just ranked the second worst in the country. I would not be surprised if that doesn't shove us into first place at the next rankings," Scott said.