Rep. Staples vows to pay back $11K in questionable campaign expenses; board postpones action to July

The Knoxville Democrat took numerous trips and charged numerous meals to his fund. He also paid for a personal vehicle warranty with campaign money. 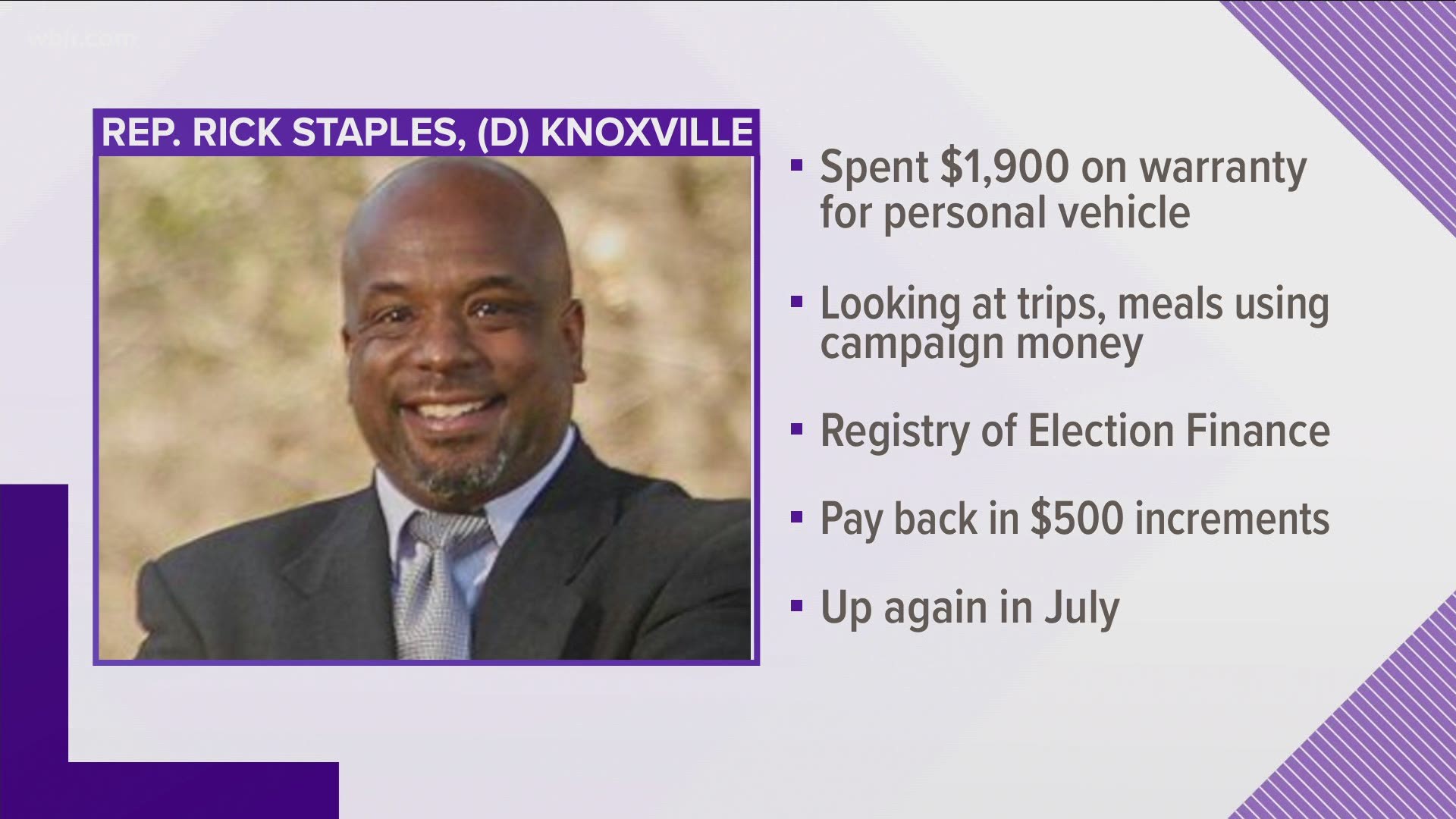 State Rep. Rick Staples told a campaign finance enforcement board Wednesday he's ready to start paying back $11,000 in questionable expenses he made from his campaign fund.

Staples, a Knoxville Democrat, said he was ready to begin making payments in $500 increments after auditors and news organizations raised questions about some of the ways he spent thousands of dollars last year and in 2020.

The Tennessee Registry of Election Finance, hearing from Staples at the end of a daylong session, briefly debated whether they should issue a show-cause order to Staples before resetting the case for next month.

After questions arose about his spending, Staples prepared a list himself in February with help from a treasurer of some 65 expenses that may not be allowable under state law. WBIR and others have reported numerous trips and meals he took and charged to his campaign account.

State auditors also warned him that his use of $1,900 in campaign money for a warranty on his personal vehicle likely was illegal.

In February, citing "grievous errors" on his part, Staples asked the board for leniency and identified some $8,910 in improper campaign fund expenses.

The identified amount has since grown. Although Staples frequently referred to the amount Wednesday as $11,000, it is actually $11,816.04, according to a letter he sent to Bill Young of the Bureau of Ethics and Campaign Finance.

Facing reelection to keep his East Knoxville seat, Staples told the board Wednesday he "was not trying to hide anything."

He suggested in his remarks that someone else was to blame for his spending reports -- "because of my trusting that things were being taken care of and documented properly."

He also complained media had created a false "narrative" about what he was doing.

On the other hand, he said, "It was important to us that we go through everything that we felt was unallowable, to just be humble enough to come up with a number and pay it back."

Staples, who has a history of personal financial problems, told the board he'd learned "a hard lesson" about record-keeping.

He said he's distributed some $40,000 in campaign funds to community causes.

"I don’t get this money quote unquote 'to kick it.'  But we really need to correct our documentation," he said.

Staples' appearance Wednesday afternoon at the board meeting in Franklin came after the six-member registry finance board heard hours of discussion about the election finance cases of disgraced former state lawmaker Jeremy Durham and former House Speaker Glen Casada, who remains a Middle Tennessee lawmaker.

Some members mused about whether it was appropriate to issue a show cause order -- a formal directive for a lawmaker to justify him or herself. That hasn't been issued in Staples' case.

Others said it might be best to give Staples time to repay what he says he owes without issuing a show-cause order.

Staples, who has primary opposition in August while trying to keep his seat, said it'd be better for his family if the matter were put off. He first won election in 2016.

The board quickly agreed to defer it to July.

His records show he sometimes offered little or only a vague explanation for why he spent some money last year from his campaign account, compiled from donations.

While questions have been raised about Staples' trips and meals in places like Florida, Atlanta and Las Vegas, he also has a history of not paying bills.

He was evicted last fall for failing to pay months on the rental of an East Knoxville house. He's also failed to pay past bills to firms that include the University of Tennessee and a $9,845 bill from Ruth's Chris Steak House in 2014, warrants show.