The legislation bans abortions once a fetal heartbeat is detected, which is as early as six weeks. 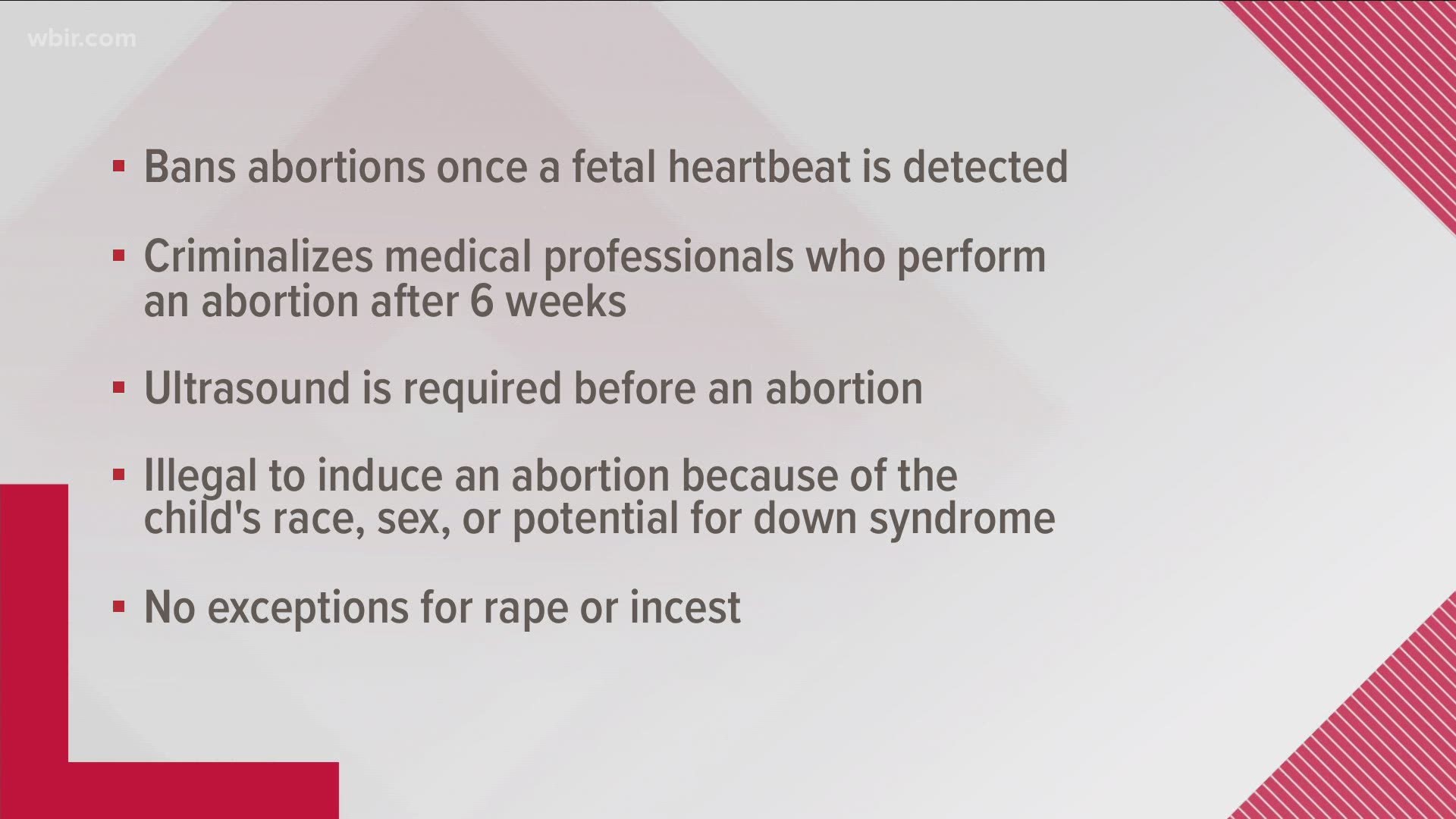 NASHVILLE, Tenn. — Three organizations are challenging a strict new abortion restriction bill in court that is set to become law in Tennessee as one of the strictest in the country.

The bill passed the Senate on a party-line vote just after midnight Friday morning in Nashville.

Friday afternoon, the American Civil Liberties Union announced it, Planned Parenthood, and the Center for Reproductive Rights had filed an emergency lawsuit in Nashville asking the court to block the bill.

The lawsuit is seeking a restraining order or injunction on enforcing the ban and for the court to declare it unconstitutional under the Fourteenth Amendment of the U.S. Constitution.

The bill also requires an ultrasound before an abortion and makes it illegal for a woman to have an abortion because of the child's sex, race, or potential for down syndrome.

RELATED: You Are Not Alone: Abortion

Both sides of the argument claimed they were protecting the health of mothers.

"Since the ruling in Roe v. Wade 47 years ago, there have been substantial advances in scientific methods and medical technology that have expanded knowledge and understanding of prenatal life and development, and as well as the significant offense of abortion on the physical and psychological health of the woman," said State Sen. Delores Gresham, (R) Centerville.

"I think that we are injecting ourselves into a decision that should be handled by the woman, her partner and family," said State Sen. Raumesh Akbari, (D) Memphis.

The legislation still needs to signed by Gov. Bill Lee to become law. He has been a supporter of the measure from the beginning.

The Friday passage of the bill shocked Democratic lawmakers and reproductive rights activists who had been assured for weeks that the GOP-dominated Senate would not take up the measure.

Senate leaders had promised only to take up coronavirus- or budget-related proposals. However, just after midnight, the chamber advanced the abortion bill backed by Republican Gov. Bill Lee as budget negotiations stalled.

The Executive Director of the American Civil Liberties Union of Tennessee released a statement opposing the legislation saying the law effectively outlaws abortion in Tennessee.

“The Tennessee General Assembly’s passage of this dangerous, flatly unconstitutional bill is unacceptable. Lawmakers used this measure in a game of political maneuvering to pass the state budget – pushing it through without regard for the actual Tennesseans who will be denied access to the care they need, including abortion  Lack of access to abortion care particularly harms those struggling financially and those who already face significant barriers to health care, including people of color, people with limited incomes, rural people, and young people. Politicians should not be deciding what is best for women and certainly not making reproductive health care decisions for them. As promised, we will see them in court.”

Tennessee is not the first state to pass such a strict abortion law, and all of them are facing challenges in court. It is likely the outcome could be decided in federal courts, or by the U. S. Supreme Court.

Representatives in the statehouse argued over that scenario last night.

"So far, all heartbeat bills have been defeated in the courts because they have been deemed unconstitutional. So why are we allowing the state to spend more money and court fees on a bill that we know is going to get struck down in the court system?" asked Rep. London Lamar, (D) Memphis.

You can read the ACLU's full lawsuit at this link and below.