The mandate requires millions of employees at businesses with more than 100 workers to get vaccinated for COVID-19 or test for the virus weekly. 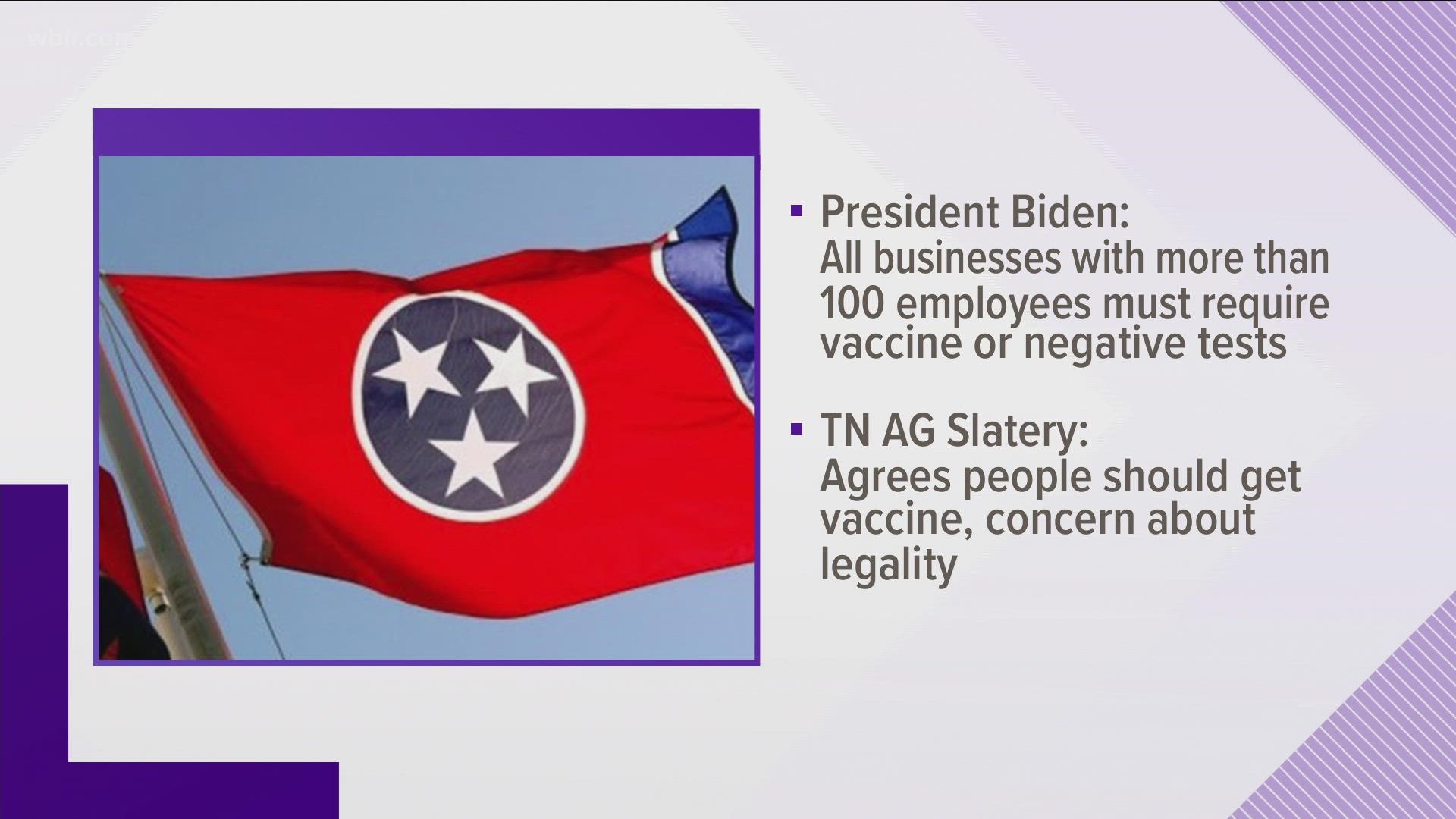 NASHVILLE, Tenn. — Tennessee Attorney General Herbert H. Slatery III wrote a letter to President Joe Biden on Thursday, expressing his concerns about the legality of the nationwide vaccination and testing requirement for COVID-19.

He is the Attorney General in a state that has the highest rate of new cases, according to federal reports. Carter, Greene, and Unicoi Counties are among those with the highest level of spread on the chart, more than 750 new cases per 100,000 people in one week. Northeast Tennessee is surpassed only by West Tennessee as a hotspot for the most deaths right now.

President Joe Biden's mandate would require millions of employees at businesses with more than 100 workers to get vaccinated for COVID-19 or test for the virus weekly.

It also requires vaccination for employees of the executive branch and contractors who do business with the federal government — with no option to test out. That covers several million more workers.

In the letter, Slatery claimed the proposal is "too broad and likely violates federal law, including both the Occupational Safety and Health Act and the Constitution."

“I would encourage everyone eligible, in consultation with a doctor, to get a COVID vaccination. It is one effective way out of this pandemic,” Slatery said. “However, this vaccine-or-test mandate appears to be an unprecedented expansion of federal power and fails to consider the steps individuals, employers, and our state have already made.”

He raised concerns about specific aspects of the mandate in the letter, saying it:

Regardless of Slatery's letter, the U.S. Supreme Court ruled vaccines can be mandated in populations in 1905, in a ruling from Jacobson v. Massachusetts.

In the letter, Slatery said that the Supreme Court recognized Congress's concerns that OSHA could have an oversized scope of power over the American industry. He says that while the office could legally issue an emergency temporary standard, it is strictly restricted in requirements found in the OSH Act.

He said that the steps Tennessee businesses have taken to reduce the spread of COVID-19 mean the coronavirus cannot be considered a "grave danger" at jobs across the U.S. The pandemic needs to meet this designation for the mandate to be legal.

Slatery notes that some businesses have taken steps including social distancing, masking and remote work. However, those safety measures are not universal across all Tennessee companies and no state law has been passed to require safety measures beyond the requirements of OSHA.

He argues that since the mandate requires employees to be vaccinated regardless of steps a business may have taken to prevent the spread of COVID-19, it does not consider that business may have already tried to keep employees safe and therefore may not be legal.

He goes on to say that even if COVID-19 was legally considered a "grave danger" at every workplace across the U.S., vaccination should not be mandatory. He says that mask requirements should be sufficient to keep workers safe, according to messaging from health leaders.

Yet, there is no Tennessee law that mandates masks in the workplace, and some public workplaces like Knox County Schools have repeatedly voted against requiring masks.

He also claims that millions of Americans have developed a natural immunity through prior exposure to COVID-19. However, the Centers for Disease Control and Prevention have repeatedly said that natural immunity does not offer as much protection as the vaccine.

They said that even if someone has had COVID-19 in the past, they are still twice as likely to contract the coronavirus compared to someone who was vaccinated.

He goes on to say COVID-19 is commonplace in daily life and says it should not be legally considered a "new hazard." Slatery also claims that since it affects areas of life outside the workplace, mandating employees to be vaccinated is not legal under OSHA.

He also discusses Congress's ability to delegate power. He says that interpreting the pandemic as presenting a "grave danger" and allowing OSHA to require vaccines could lead to concerns about whether Congress is the only body that can create legislation.

Slatery goes on to argue that the mandate undermines the "federalist structure of our joint government." In it, he argues that states have powers that the federal government lacks and that states primarily act as guardians of citizens' health, safety and well-being.

He also says that since COVID-19 affects states differently at different times, Supreme Court rulings may not be appropriate for describing the powers of the federal government to require vaccines.

In the letter, he also claims that the vaccine-or-test mandate from President Biden implicates religious liberty and free speech.