It would let citizens carry everywhere with the exception of some restricted areas. 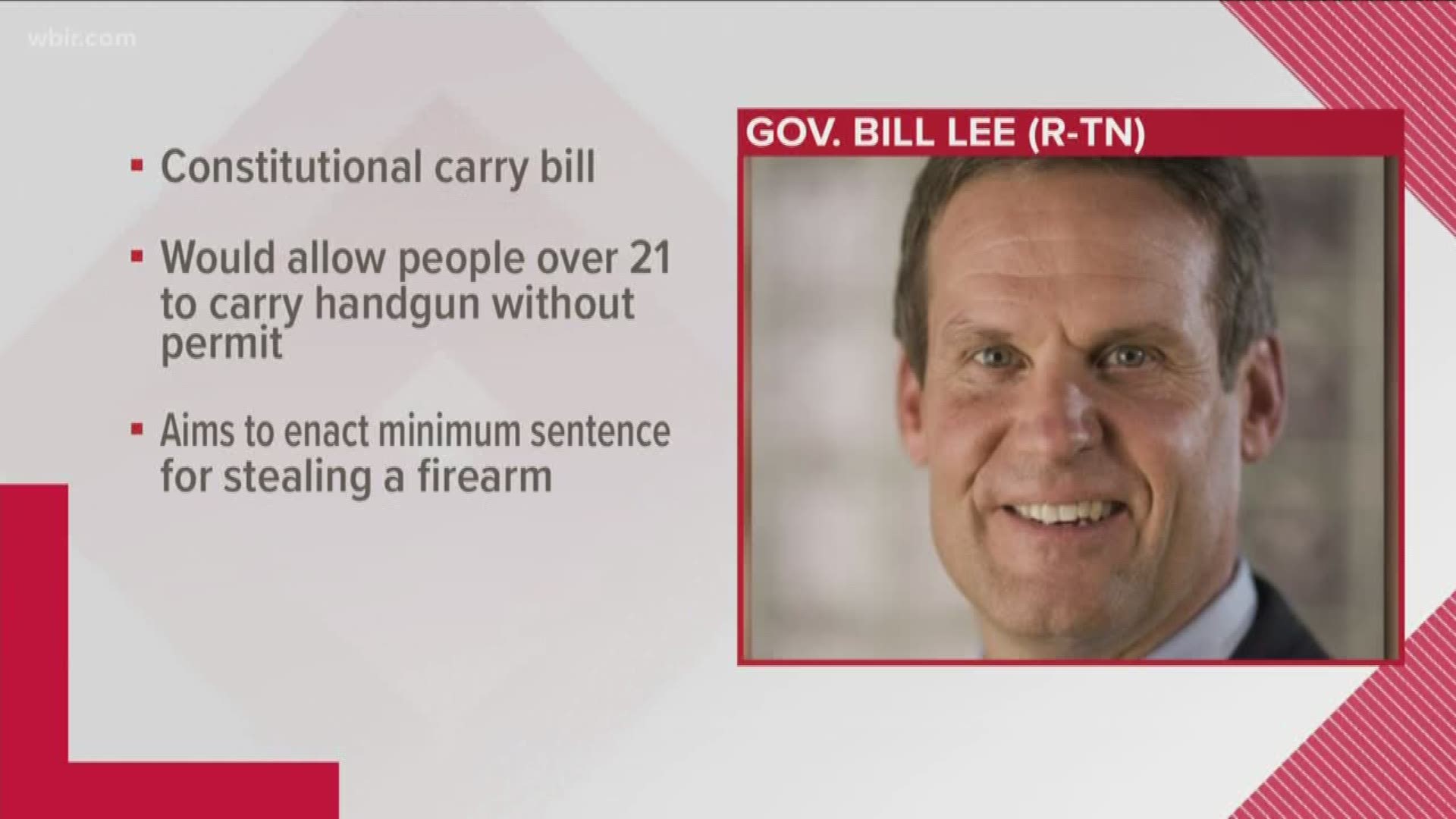 NASHVILLE, Tenn. — Governor Bill Lee announced an administration bill Thursday that would all law-abiding citizens in Tennessee to carry a handgun without a permit if they're over 21 years old.

It would let citizens carry everywhere with the exception of some restricted areas.

Gov. Lee said the bill would also increase penalties for those who steal or unlawfully carry a firearm — increasing safety for all Tennesseans.

"Here in Tennessee, there was an 85 percent increase in guns stolen from cars and trucks in 16 and 17," Lee said. "We need to be increasingly vigilant in strengthening laws to protect our citizens."

He said it's about increasing the freedom for law-abiding citizens and implementing harsher penalties for criminals.

"We'll be taking guns out of the hands of criminals and criminals off the streets of Tennessee," Speaker Cameron Sexton said.

Lee said it would also stiffen the penalties for those who provide a handgun to juveniles.

"We will work to keep guns out of the hands of youth," he said.

The Second Amendment of the United States Constitution reads: "A well regulated Militia, being necessary to the security of a free State, the right of the people to keep and bear Arms, shall not be infringed."

The Tennessee chapter of Moms Demand Action for Gun Sense in America and Students Demand Action, both part of Everytown for Gun Safety, released the following statement after the announcement:

“It’s common sense that if you’re going to carry a concealed gun in public, you should pass a background check and make sure you know how to handle it,,” said Leeann Hewlett, volunteer leader with the Tennessee chapter of Moms Demand Action. “ Governor Lee should listen to gun safety instructors, who know far more than most about being responsible gun owners. They have said loud and clear that cutting our permitting system is the wrong choice for Tennessee.”

“Governor Lee’s announcement today proves that he’s wildly out of touch with the vast majority of Tennesseans,” said Seo Yoon Yang, a volunteer with Chattanooga Students Demand Action and member of the Students Demand Action National Advisory Board. “Tennessee’s permitting system helps keep Tennessee families safe — but the governor would rather pander to gun extremists and dismantle a cornerstone of responsible gun ownership in Tennessee.”

"Permitless carry allows anyone to have a gun in any space anywhere without any sort of training or education about responsible gun ownership," said Scheer.

She went on to say, "In order to get your driver’s license, you have to drive a car. But now, to get a gun, all you need to do is have the money to buy one.I think if you’re going to be able to own and operate a deadly weapon, I don’t think it’s without reason to think that you should have some sort of training to use that."

"We support eliminating as a criminal liability matter the need to have state mandated training in part because the training that’s required is poorly designed. The current training is a six hour PowerPoint presentation with hundreds of slides, and you know people just fall asleep watching that thing. It doesn’t do anything to meaningfully train anybody."

Rep. Gloria Johnson (D-Knoxville) released a statement after the announcement.

"Governor Lee’s call today for permitless carry is a reckless idea for all Tennesseans. Regardless of where you live in Tennessee, this legislation will not make your family safer. Tennesseans, while supporting the 2nd Amendment, also believe in common sense policies like universal background checks on gun purchases. Our current permitting system has served Tennesseans for years and there is no reason to make these changes now, especially as we have the data to show that states who have enacted permitless carry have seen drastic increases in assaults committed with firearms."

Ahead of the announcement Thursday, Rep. Jason Zachary, R-Knoxville, tweeted Thursday morning that Lee would be making a "BIG 2nd Amendment announcement."

Rep. John Ray Clemmons, D-Nashville, tweeted that he was angry about the anticipated announcement.