The ACLU of Tennessee said a bill barring transgender students from playing sports in middle and high school embeds discrimination in state law. 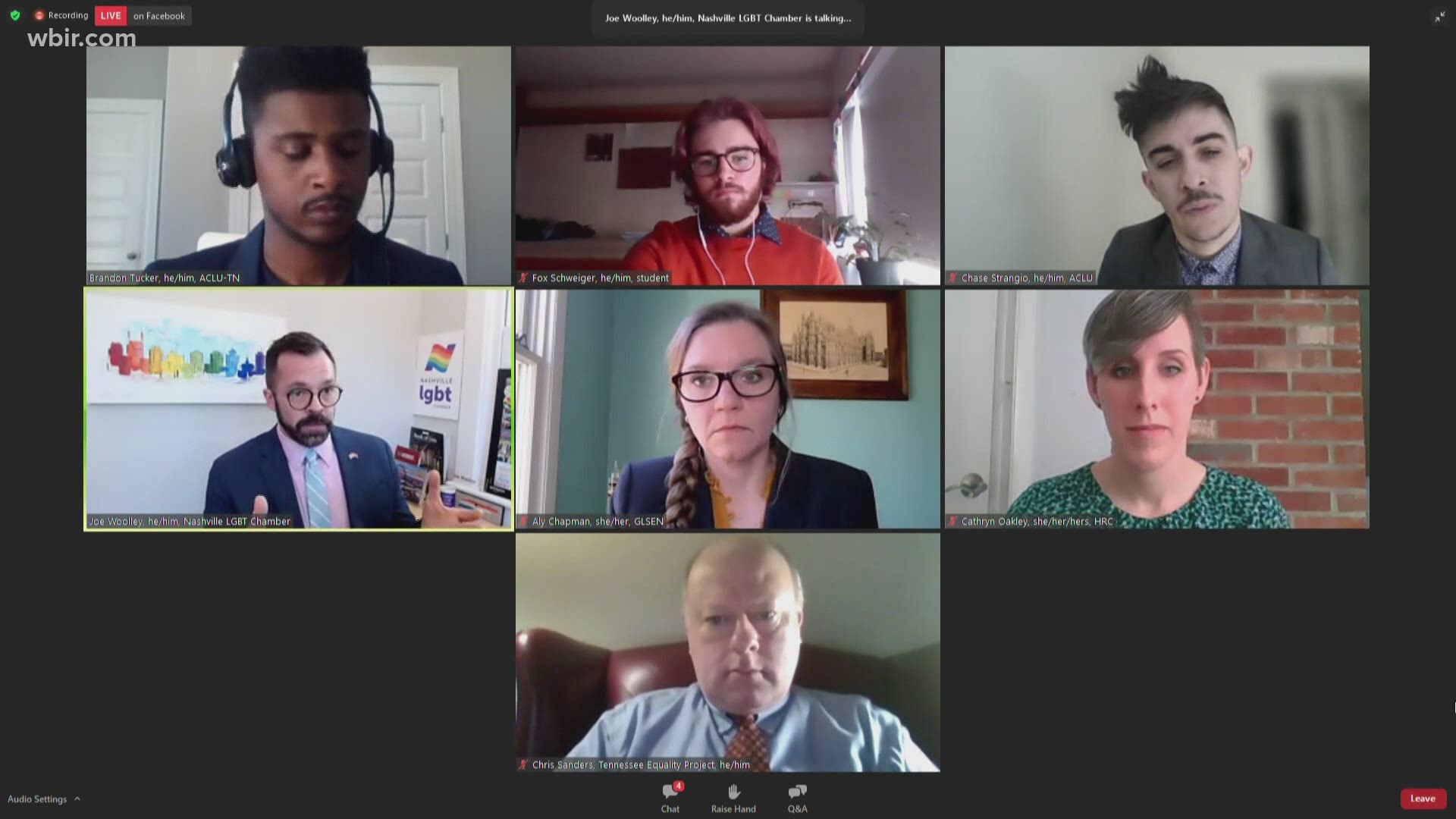 NASHVILLE, Tenn. — A bill preventing transgender student-athletes from playing on middle and high school teams associated with their gender identity passed Monday in the Tennessee Senate by a 27-6 vote.

It still faces a test in the state House. Republicans have a super majority in both houses of the General Assembly.

The American Civil Liberties Union condemns the bill as an attempt to embed discrimination against transgender girls into state law.

"This hateful and unconstitutional bill is unnecessary — the bill sponsors have admitted that they do not know of a single instance of a Tennessee student facing any harm from a transgender athlete playing sports," said Hedy Weinberg, ACLU of Tennessee executive director.

Joe Woolley, CEO of the Nashville LGBT Chamber of Commerce, said the city of Nashville depends largely on tourism and convention revenue and warned that other cities could cite the bill as a reason for tourists to avoid the city. Other states such as North Carolina have endured boycotts for taking a stand against LGBTQ+ issues.

Woolley said the city may not be able to host events similar to the 2019 NFL Draft if the bill passes. The NFL and similar organizations previously said they will not go to states with similar bills in place.

"That Tennessee is talking about this and looks on the verge of passing this -- conventions will go elsewhere," he said. "They will not take their attendees to a place that is not welcoming ...  We are about to step in front of a speeding bus and get ran over if we are not careful."

He said that $3.76 billion was lost after North Carolina lawmakers passed the "bathroom bill," which prevented transgender people from using bathrooms of their gender identity.

The Tennessee bill was put forward by GOP lawmakers and was discussed several times. It requires that a student's gender be determined by their sex at the time of their birth when it comes to athletics, and says they must provide evidence of their birth sex if it doesn't appear on their birth certificate.

State Rep. Eddie Mannis, R-Knoxville, called on lawmakers to reconsider the bill in February, saying that it would only further marginalize teens and could do more harm. He said there is no data supporting claims that transgender athletes are preventing other athletes from earning scholarships.

He said there is data supporting arguments that marginalization of the LGBTQ+ community, and against transgender people generally, can lead to an increase in assaults and suicides. He said he would prefer the Legislature put effort into suicide prevention instead.

Fox Schweiger, a transgender student, also spoke during the meeting. He said that the bill could further discrimination in schools by giving administrators and educators more authority over activities available to transgender students.

Chase Strangio, a member of the ACLU, also said that the bill does not consider whether a person was undergoing gender-affirming hormone therapy and would instead outright ban transgender students from playing.

He also said that the bill does not follow medical science on transgender people showing that self-harm and mental illness rates decrease when transgender athletes are allowed to play.

"What we have here is a clear effort to eradicate transness and target transgender young people," Strangio said. "Looking at performance differences between elite athletes who are cisgender men and cisgender women has nothing to do with what's going on in youth sports."

Chris Sanders, from the Tennessee Equality Project, said that the bill still needs to be scheduled for a vote in the House of Representatives. He said that he expects a vote to be scheduled early next week and that it looks like the bill will pass.

"We're on a very quick, dangerous path, I think," he said. "There is still time for individuals to contact their own members of the Tennessee House."

The bill was introduced by Middle Tennessee Republican Scott Cepicky. He told a state subcommittee that his aim in filing the bill was to maintain a competitive balance in athletics.