"I want to remain steadfast to move forward in the things that impact Tennesseans lives the most," Lee said. 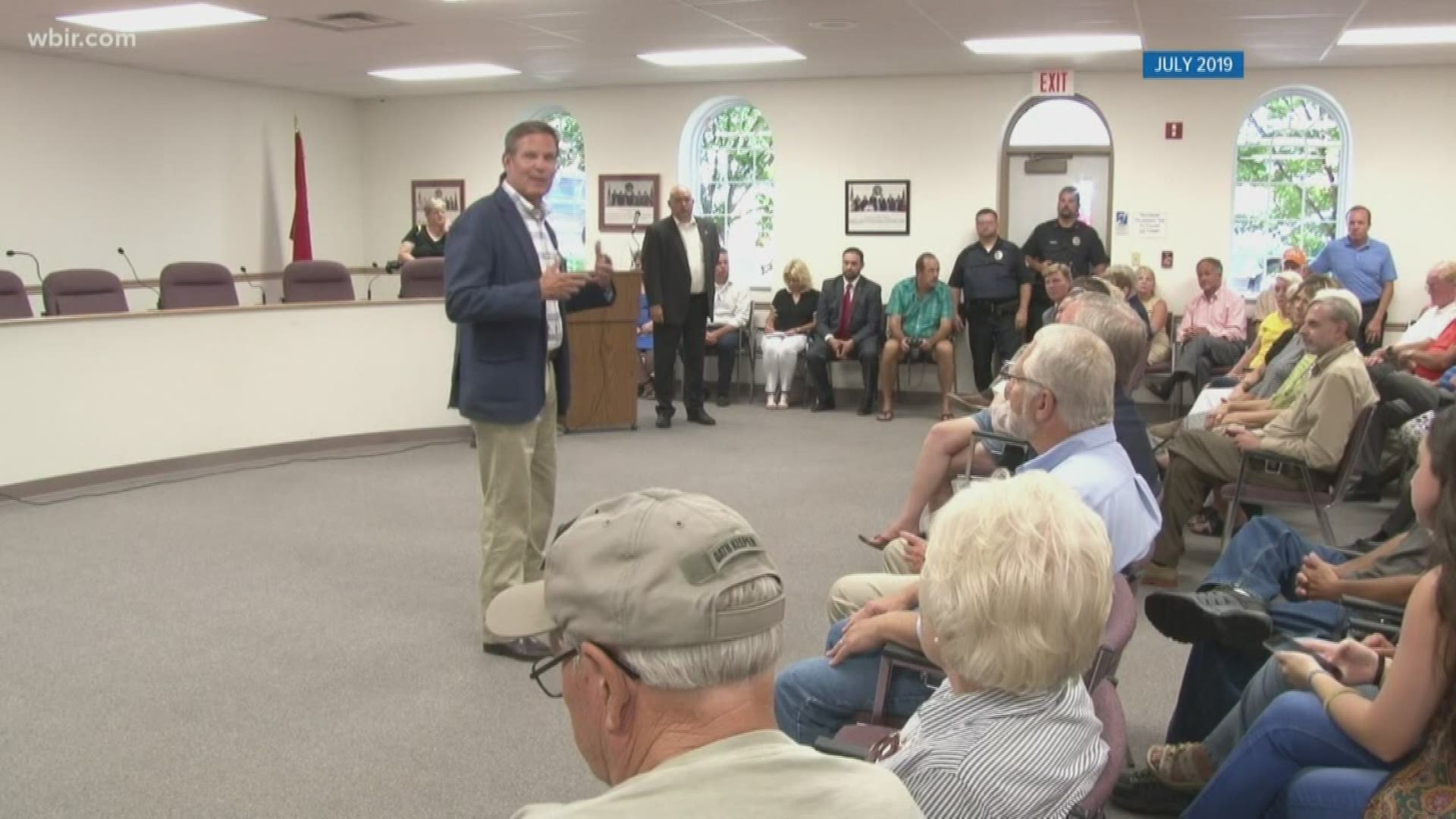 NASHVILLE, Tenn. — When Tennessee Governor Bill Lee took office, he vowed to tackle education, poverty, criminal justice, healthcare and the opioid epidemic. Nearly a year later, he's reflecting on what he has accomplished so far and where Tennessee needs to go next.

10News reporter Grace King met him in the state Capitol Thursday to discuss his current initiatives and his priorities for 2020. Below is an excerpt of our conversation with the governor, edited for clarity and length.

What are the three biggest things that you think you’ve accomplished so far?

I've had the great privilege of being in this spot where you carry things around in your heart for years and then you get to actually act on them. I worked in skilled trades business for 35 years and this year we got to pass the Governor's Investment and Vocational Education (GIVE) Act which strengthens vocational, technical and agricultural education across the state.

And, the economy of our state. We created a budget and it was passed by the legislature, to be fiscally responsible. We were named after that budget was passed last year as the best (long-term) fiscally managed state in America. That's really important to Tennesseeans because that environment is attractive to companies. That creates jobs. We have brought in 99 new companies into this state in the past year, 12,000 jobs, over $2 billion worth of investment. We have a very strong economy in this state. And I think that the legislature and our office have worked together to make sure that we keep it moving in that direction.

What is your biggest goal for next year?

I want to remain steadfast to move forward in the things that impact Tennesseean’s lives the most. People want opportunity for the next generation, whether it’s their kids or the kids around them. That means we have to focus on education in a greater way. Our public schools need support, and not just financial support — they need innovative, creative approaches to improving our outcomes and our education system.

Criminal justice reform has just begun. We do have a real challenge there. We need that recidivism rate to lower so there's a lot of work yet to be done. Our Criminal Justice Task Force just released their recommendations [Thursday] that will result in legislation that will ultimately result in recidivism lowering.

We’ll continue to work on economic development, whether it's in rural communities or big cities. Job creation lifts people out of poverty and it provides opportunity for those all across the state. So economic development is something that's really important. We do that in part by managing a budget. That's important to us as a state. It allows us to invest in things like mental health, the opioid epidemic, criminal justice reform, the things that will ultimately change Tennesseeans’ lives.

When you recruit business to the state of Tennessee, what do you see as the number one selling point for the state?

That matters to companies because they know that we have financial stability. When you bring those all together, combine that together, it's a business friendly environment.

Does political division at the national level hurt cooperation at the state level?

There's a lot of politics at the national level that really don’t play out very strongly here locally. I think we accomplish the most when we find common ground and move forward. That's my strategy. It's my approach. It’s the way I want to govern, the way I work with legislators.

When we do that, we can have an environment in Tennessee that's much less divisive, much more cooperative and that actually gets things done.

What’s the current state of the opioid crisis in Tennessee?

It is a tragedy. And it is an opportunity, for us to turn the tide on what has been life altering for so many families. It is clearly one of the greatest challenges we have in our state, but it's one that I think it’s really possible to turn the tide and in some ways we have begun to do that.

It's a continuation of efforts between law enforcement, drug officials and the mental health community. It is a continuation of those efforts, but a strengthening of them. It's looking at the programs that are working best and then investing more heavily both in time and resources toward those. It’s really a mental health and substance abuse issue. And we are working really hard with partners. It's just going to require partnership all over the state to do that.

We hear a lot about the opioid crisis. But is there also a reading crisis in the state?

We do not have the literacy rates that we need. Our outcomes on reading readiness are not at all what they should be. We have a real understanding that we've got to focus on early childhood education, from kindergarten through third grade in particular, and we have some efforts that we're excited about moving forward that are going to put an emphasis on literacy in our state.

What attainable gains do you think we can expect to see in the next couple of years?

I think we can move in literacy rates. It's fairly easy to measure those because we have every kid in classrooms and we have the opportunity to assess their literacy rates. They'll be slow at first; this is not going to start to turn around overnight. But, so long as we're moving in the right direction — and we are — then we’re going to have better outcomes.

In most Tennessee counties, what do you consider a “good wage” for a family of four?

It changes per county. There's a wide range of that income range. One of the things that we have put a great deal of emphasis on is attracting companies that are bringing — as their average wage — higher than the median wage in that county. So we want to make sure that if we're asking a company and attracting them and incentivizing them to come into our state, we really work to attract companies that are going to bring jobs paying higher than the median wage in that county. That provides economic opportunity for everybody.

Is there a fellow governor, Democrat or Republican, that you bounce ideas off of?

I actually have had the real privilege of getting to know a number of governors. I'm a member of a governors’ association and we meet regularly. We talk about challenges in each of our states and how each one of us addresses those. So actually, I have had a lot of opportunity to talk to multiple governors around different issues. Each has their own unique challenges, but a lot of us share common challenges.