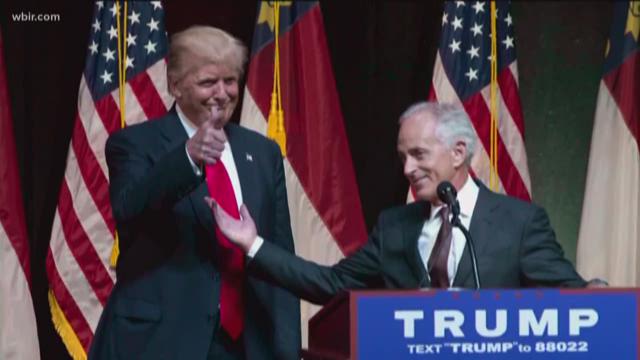 The approval ratings of both President Donald Trump, Sen. Bob Corker and Sen. Lamar Alexander have dropped more than 10 percentage points since November 2016 according to a new Vanderbilt University poll.

The poll gauged 1,013 randomly selected registered voters across Tennessee on their views on pubic policy and their perceptions on current political issues.

In the approval polls, Gov. Bill Haslam remains the most popular politician in the state.

While the governor’s approval rating dipped in the middle of the year after posting 68 percent approval in 2016, Haslam remains the most popular politician in the state at 63 percent approval --a margin of more than 10 percentage points over anyone else according to the poll.

The poll found that at the time of Trump's election, 54 percent of Tennesseans thought the country was changing for the better.

Now, just 35 percent think so. Conversely, in November 2016, 20 percent of Tennesseans thought the country was changing for the worse. Now that number has gone up to 36 percent.

Also, 39 percent of Tennesseans believe the president is telling the truth -- the same number as those who believe he rarely does.

John Geer, a professor of political science at Vanderbilt, posits Tennessee may prove to be a more moderate and bellwether political player in the 2018 midterm elections, pointing to radical shifts in voting patterns in 2017 such as Alabama's turbulent special election which saw Democrat Doug Jones elected to senate.

“Conventional wisdom says that Tennessee is a ruby-red state, but the data from the Vanderbilt Poll does not always square with such a claim,” Geer said. “When we asked Tennesseans to characterize their fellow citizens’ ideological leanings, 62 percent believe their fellow Tennesseans to be conservative or very conservative. Yet when you ask these same people to rate their own ideological leanings, just 48 percent describe themselves that way.”

Geer said he believes Tennessee is undoubtedly a conservative state, but says there is an overestimation by people all over of just how conservative most people in the state really are.

“These findings speak to why polling is important. It gives voice to those quieter and more moderate people in the state,” Geer added.

The poll also gauged name recognition of candidates for the upcoming 2018 elections, which found Republican Marsha Blackburn led all other candidates at 73 percent. In the race for governor, Republican Diane Black led with 59 percent recognition.

Issues such as charter schools, repealing the Affordable Care Act, and thoughts on climate change were polled as well. You can read the full report and compare the numbers at this link.

The poll, which surveyed a sample of 1,013 registered voters through landline telephone and cellphone interviews, was conducted Nov. 16 through Dec. 5. It has a margin of error of plus or minus 3.7 percent percentage points and is weighted to match Tennessee's registered voter parameters. You can read the full methodology of the poll here.