Eddie and Jason Bales ran Fort Loudon Waste and Recycling, destroyed May 1 in a massive fire. They previously were principals in their father's recycling firm, Advanced Polymer Recycling Inc., which became mired in money problems. 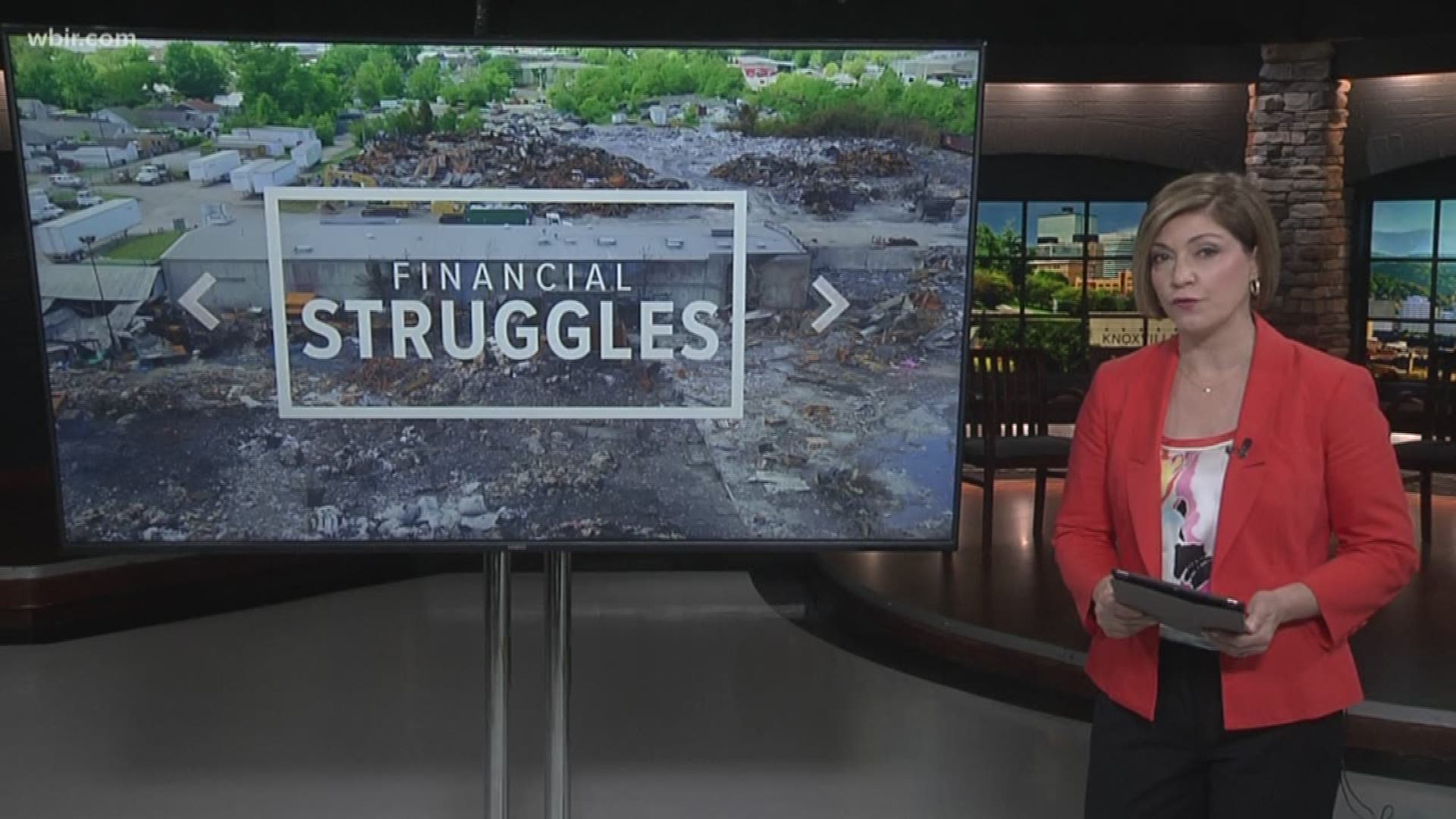 Edward P. "Eddie" Bales Jr. and younger brother Jason Bales own Fort Loudon Waste and Recycling, 2742 Hancock St. Fire broke out at the North Knoxville site about 1 p.m. May 1, burned for more than two days and leveled the center.

As 10News reported last week, Fort Loudon Waste has failed to pay city and county property taxes for several years, amounting to about $170,000.

It also owes money to the Knoxville Utilities Board. A public records request submitted by 10News shows Fort Loudon Waste and Recycling Center’s outstanding balance to KUB is $45,648.04.

The IRS also has slapped the firm with a federal lien for unpaid quarterly taxes dating to 2017, records show.

The state of Tennessee is still waiting for Fort Loudon Waste to fully pay two fines assessed last year after work-place safety and health inspections, according to the Department of Labor and Workforce Development.  The amount now owed -- and turned over to the state Attorney General's Office for collection -- is about $27,000, according to spokesman Chris Cannon.

"I’ve got no comment until further notice," Bales said.

And there are other bills due, 10News has found.

Businessman Trinity Cawood of Foothills Brokerage Inc. said this week he's been trying to get the Bales brothers to pay him for the lease of 10 trailers used in their recycling business.

He said he last got a payment in December 2018 for half of what was owed on October's invoice.

"They won't returns calls, they won't answer emails," he said.

He said he's conducted business with Fort Loudon Waste since about 2011.

The trailers have been used to pick up and drop off recyclables such as paper and plastics, Cawood said.

Cawood said the recycled plastics market has suffered in recent years with major customers such as the Chinese less inclined to buy.

He provided WBIR with a "forbearance agreement,"  a document usually presented in lieu of foreclosure, that he proposes between his business and Fort Loudon Waste.

Credit: WBIR
The huge May 1 resulted in neighborhood evacuations.

The agreement, prepared before the fire, calls for the Baleses to return the trailers by May 31.

But Cawood said he doesn't know if the trailers actually survived the fire. He's planning to go to the site soon to see for himself.

The brothers started Fort Loudon Waste and Recycling after buying the Hancock Street site in 2011, records show. But they already were very familiar with the recycling business thanks to their father, Edward P. Bales Sr.

Before he died in February 2010, Bales Sr. owned a firm called Advanced Polymer Recycling Inc., or APR. He started it in 2004, according to a company history prepared in 2007 for a city contract.

Its address was on Springdale Avenue, not far from the Hancock Street site in North Knoxville where the brothers eventually would open their own business.

Jason Bales was president of APR and Eddie Bales, who had filed for bankruptcy in 2003, was vice president for procurement and sales, according to the company history.

APR faced numerous disputes and lawsuits through the years with company contractors over matters such as unpaid leases for equipment, records show.

In 2007, APR bid on and received a contract from the city of Knoxville to handle recycling left at city recycling centers. APR was to pay the city over the course of the two-year contract for acquiring the materials. It, in turn, could turn around and process the recyclables for sale.

But APR fell behind in paying what it owed, according to court records. A plunging recyclables market was cited as the reason.

Credit: WBIR
The smoke plume could be seen for miles and more than a day.

In October 2008, the city sent a letter headed "Dear Jason and Eddie" asking the brothers to improve their "payment timelines."

Several months later, however, the city was ready to end the deal, although Knoxville officials said they harbored "no hard feelings" over the termination.

But they did expect their money under the contract.

Knoxville ended up suing APR in July 2009 in Knox County Chancery Court and received a judgment of $204,820.

It hasn't received its money, however, according to David Brace, the chief's chief operating officer who was part of the original contract negotiations 10 years ago.

One lawsuit filed by Springdale Partners LLC, which has Ohio origins, sought repayment for unpaid rent, utilities and repairs from Bales Sr., records state. It won a judgment for about $250,000.

After Bales Sr. died in 2010, numerous creditors filed claims against his estate in Knox County for repayment including the city of Knoxville. Springdale Partners won a bid for what turned out to be among the estate's few assets -- shares in an operation called New Jersey Airport Services Inc. APR by then appeared to have no practical value, according to records.

Records indicate there's been an effort to declare the estate insolvent. But nine years after Bales Sr.'s death, the case is still dragging on in Knox County Probate Court.