Casada says the Republican caucus supports him despite recently released text messages showing Cothren bragging to Casada about having sex in a restaurant and other sexually explicit discussions. 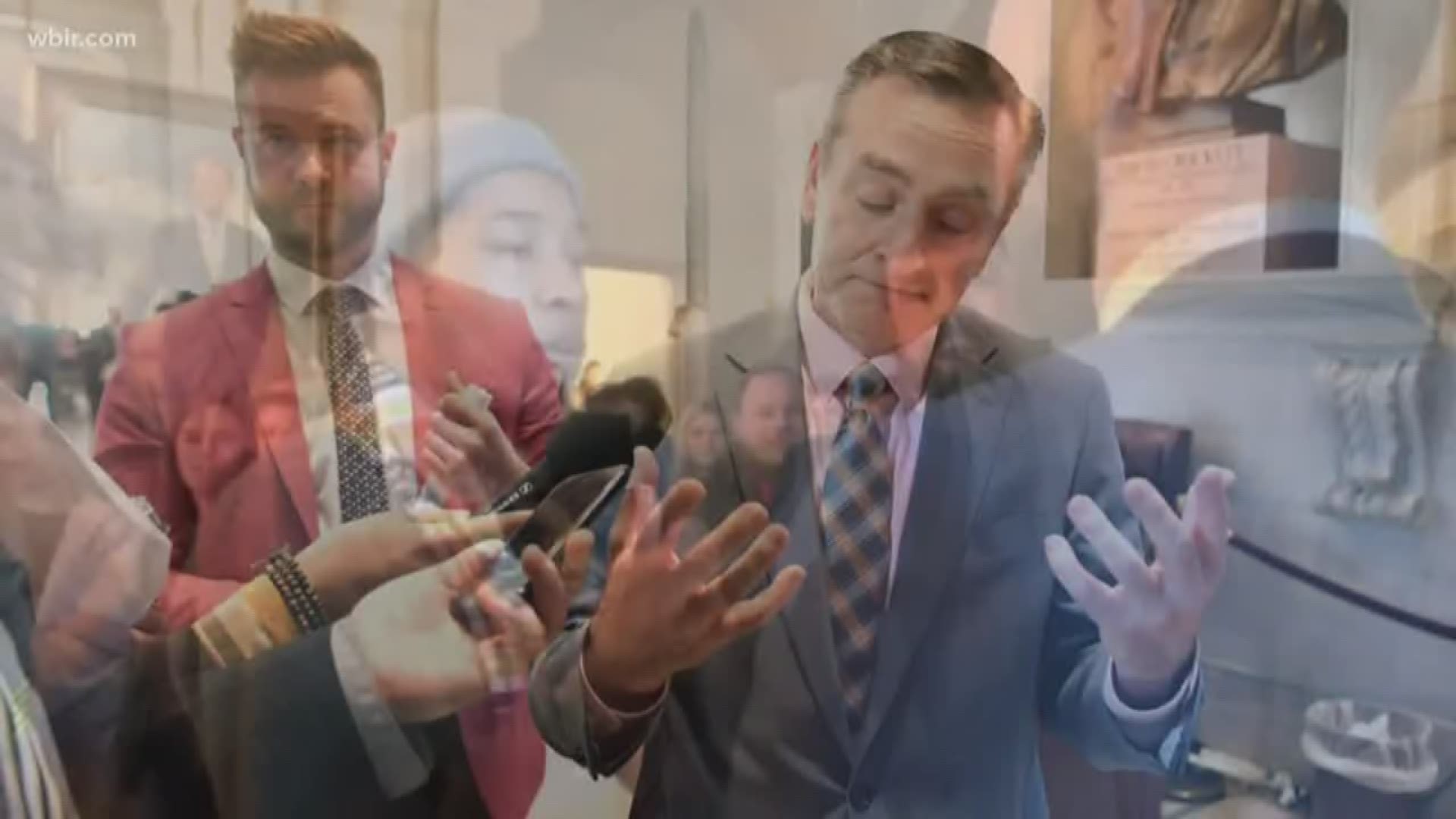 NASHVILLE, Tenn. (AP) — Tennessee's House speaker on Tuesday said he was wrong to participate in lewd conversations about women with his former chief of staff and described the language as "locker room talk" between adult men.

"Three years ago, I participated in base locker room talk, if you will, among two adult men," said Casada, a Republican from Franklin. "I'm not proud of that. I'm embarrassed about that."

The "locker room talk" defense also was invoked by Donald Trump during his presidential campaign, in response to an "Access Hollywood" tape that captured him saying fame enabled him to grope women.

At least four other Tennessee lawmakers also have faced high-profile sexual misconduct allegations and Casada has been criticized for repeatedly defending at least one of them and also briefly appointing the lawmaker to a leadership position before reversing course.

Later Tuesday, Republicans Gov. Bill Lee and Senate Speaker Randy McNally both offered brief statements on Casada and Cothren — though both held off from calling for Casada's resignation or criticizing the way he handled the matter.

"We owe it to Tennesseans to ensure they know that all of us in elected office hold ourselves to that high standard," Lee said. "Recent revelations have shaken that faith, and we need to ensure that confidence is fully restored."

After speaking at a conference in Oak Ridge later in the day, Lee declined comment on whether Casada should resign but said that "I think it's disturbing, what's happened in the last couple of days." Lee added that "I think it was appropriate" that Cothren stepped down.

Casada said Tuesday the Tennessee House Republican caucus still "overwhelmingly" supports him, and he has no plans to resign despite recently released text messages showing Cothren bragging to Casada about having sex in a Nashville restaurant. A separate sexually explicit discussion between the two men included Cothren sending a photo of a woman next to a pole and Casada asking if he could "just touch" her after Cothren joked "Hands to yourself."

The Tennessean was the first to report Monday the sexually explicit text messages. Cothren resigned shortly after the lewd texts were revealed, following a week of scrutiny over alleged racist text messages. He had also acknowledged prior drug use in a legislative building and was facing allegations of tampering with evidence of a young activist's criminal case.

However, the sexually explicit messages directly involved Casada — forcing the top Republican to go on the defensive about what he knew about Cothren and his remarks about women.

"I'm sorry that I did it and I'm embarrassed that I did it," Casada said during the radio interview. "It won't happen again."

House Democrats have since called for Casada to step down as speaker.

"Citizens of the state of Tennessee deserve to have a speaker that they can trust; whose character and moral standards are beyond reproach," said House Minority Leader Karen Camper, in a statement. "The actions of our speaker are unbecoming and disrespectful, not only to the citizens of our state, but to the office he holds."

McNally chided Casada for his comments on Twitter, saying the Senate leadership was very disappointed, and that everyone who interacts with the state legislature should be treated with respect.

Gov. Bill Lee didn't mention Casada by name, but also seemed to take aim at the House speaker on Twitter. He said those who enter public service are held to a higher standard, and that they need to work to restore public trust.

Separately, the Tennessee Black Caucus of State Legislators called on state officials to investigate Cothren following allegations he may have tampered with evidence by making it look like student activist Justin Jones sent an email to Casada in violation of his bond conditions after his arrest in February during protests at Casada's office.

Jones has argued he actually wrote the email to Casada before his arrest and that someone changed the date to make it look like it was afterward.

When pressed by reporters, Casada called the allegations "absolutely false" and said the email was received on a date different than when it was sent. Cothren has refused to answer questions about it.

The district attorney's office also has since requested that a special prosecutor take over Jones' case because the email's authenticity has not been verified.