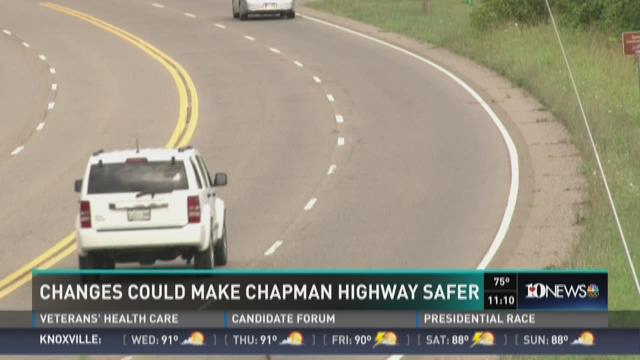 The meeting focused on the approximately seven mile section of Chapman Highway between Foothills Drive and White School Road in Sevier County.

There were 14 fatal crashes on this section of Chapman highway between 2006 and 2015.

"Our goal is to be able to save lives, reduce crashes, and certainly make it a more comfortable drive for the folks who are using it every day," said TDOT Region One Director Steve Borden.

The project in question will include resurfacing the existing roadway and adjusting lane markings for dedicated passing lanes, a continuous center turn lane, and wider shoulders.

The plan also calls for reducing the speed limit from 55 miles per hour to 50 miles per hour in that section of Chapman Highway. TDOT officials said it will take an estimated 46 seconds longer for drivers to pass through the area.

The changes are expected to reduce crashes and improve safety.

"I'm hoping for a safer motoring experience for my constituents, and as well as our visitors who come to see the Great Smoky Mountains," said Sen. Doug Overbey.

Borden said the project could be completed by the end of the year and would cost about $2.5 million.

If TDOT were to widen Chapman Highway to five lanes through the 7.2-mile section, it would cost $82 million. According to TDOT information handed out at the meeting, that plan is not feasible based on traffic volumes, funding, and the impact to local businesses and residents.