West's execution is scheduled for Aug. 15. He was convicted for the 1986 murders of a Union County mother & daughter. He received a death sentence in 1987. 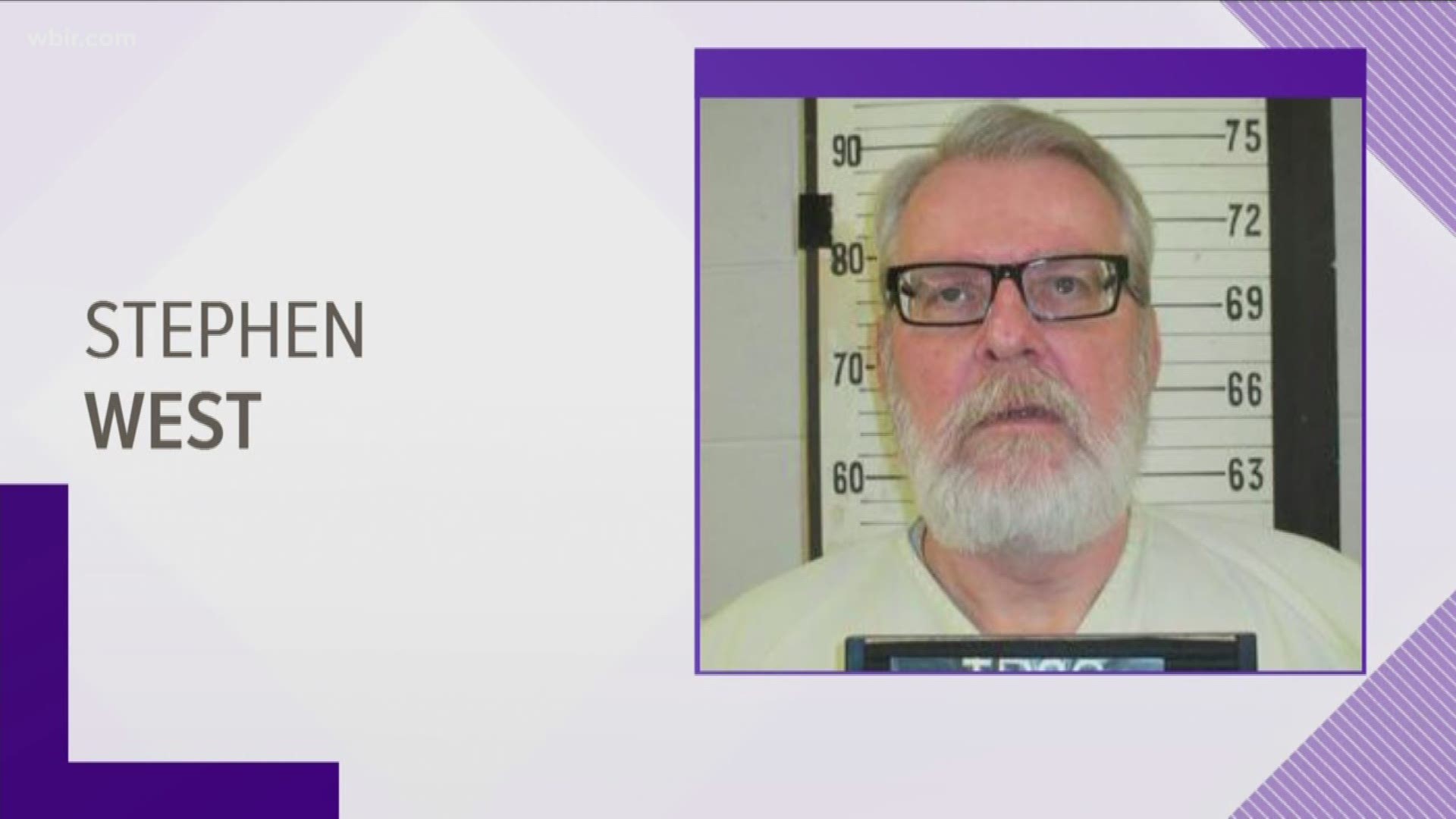 NASHVILLE, Tenn. — Updated Story (8/15/19 8:31 p.m.): Stephen West, a Union County death row inmate convicted in an East Tennessee double-murder in the 1980s, has died after the State of Tennessee executed him at the Riverbend Maximum Security Institution in Nashville.

According to TDOC, West selected a Philly cheesesteak and French fries for his final meal, which will be served Thursday.

NASHVILLE, Tenn. (AP) — A Tennessee inmate has made a last-minute request to be put to death in the electric chair, an option his lawyer described as "also unconstitutional, yet still less painful" than the state's preference of a three-drug lethal injection.

The state Department of Correction on Wednesday confirmed 56-year-old Stephen West made the request and said the Thursday execution will be carried out by electrocution.

West previously opted against selecting a preference, which would have resulted in lethal injection. West's attorney described both options as unconstitutional in his still-active U.S. Supreme Court challenge, as he seeks a stay in the execution.

"Seeking to avoid the constitutionally-impermissible pain and suffering created by Tennessee's three-drug midazolam-based protocol, Mr. West has, as have two other Tennessee inmates before him, agreed to be executed by the also-unconstitutional, yet still less painful, method of execution, Tennessee's electric chair," his attorney wrote in the court filing.

Two Tennessee inmates, David Miller and Edmund Zagorski, chose to die by electric chair in 2018 because of concerns about pain associated with the state's lethal injection procedure. Both unsuccessfully argued to courts that Tennessee's procedure, which uses the drug midazolam, results in a prolonged and torturous death. Before this year, the last time a state used the electric chair to execute an inmate was 2013.

RELATED: I watched David Earl Miller die. Here is what I saw.

Zagorski, similar to West, made a last minute to request the electric chair after previously being set to use lethal injection which resulted in a brief delay in his execution to allow the state time to prepare for using the alternative method.

Tennessee has also put two inmates to death by injection since August 2018.

West's attorney has argued that some "feasible and readily implemented alternative methods of execution exist that significantly reduce the substantial risk of severe pain and suffering" compared with the state's three-drug protocol or electrocution: a single bullet to the back of the head, a firing squad, a "euthanasia oral cocktail" or one-drug pentobarbital, according to a February court filing.

West was one of four death row inmates who sued last year, asking a federal court's permission to use a firing squad as an execution method. Currently, just three states — Mississippi, Oklahoma and Utah — continue to allow the use of firing squads. However, the last time that method was used was in 2010.

In Tennessee, condemned inmates whose crimes occurred before 1999 can opt for the electric chair. Tennessee is one of six states that allow such a choice, according to a database from the Death Penalty Information Center.

Three others allow the electric chair as a backup method.

The last state other than Tennessee to carry out an execution by electrocution was Virginia in 2013, according to Death Penalty Information Center data.

No state now uses electrocution as its main execution method, according to the center, which doesn't take a stand on the death penalty but has been critical of its application.

RELATED: How Tennessee prison officials test the electric chair before an execution

Georgia and Nebraska courts have ruled the electric chair unconstitutional. About two decades ago it looked as if the U.S. Supreme Court would weigh in on the issue. It agreed to hear a Florida case after a series of botched executions there. But Florida adopted lethal injection, and the case was dropped.

West was convicted of the 1986 kidnapping and stabbing deaths of a mother and her 15-year-old daughter, and of raping the teen. West has said his then-17-year-old accomplice killed both victims. The co-defendant received a life sentence, with parole possible in 2030.

Original Story (7/29/19): NASHVILLE, Tenn. (AP) — A Tennessee death row inmate has declined to choose the method of his execution scheduled for mid-August, a non-decision that would result in his death by lethal injection.

Tennessee Department of Correction spokeswoman Neysa Taylor confirmed in an email Friday that Stephen West declined to pick his method of execution when given the opportunity. She said that by policy, the method would default to lethal injection.

Four inmates have been executed in Tennessee since August 2018. Two died by the state's preferred method, lethal injection, and two chose the electric chair, arguing it would be a quicker and less painful way to die than the three-drug method.

West's execution is scheduled for Aug. 15. The 56-year-old was convicted for the 1986 murders of a Union County mother and daughter. He received a death sentence in 1987.

He was found guilty of kidnapping and stabbing Wanda Romines and her 15-year-old daughter, Sheila Romines, to death. West was also convicted of raping the teenager.

In a February court filing, West's attorney argued that some "feasible and readily implemented alternative methods of execution exist that significantly reduce the substantial risk of severe pain and suffering" compared with the state's three-drug protocol or electrocution: a single bullet to the back of the head, a firing squad, a "euthanasia oral cocktail" or one-drug pentobarbital.

In February 2001, West came within 10 hours of dying in the electric chair before deciding to resume appeals of his death sentence.

RELATED: US government will execute inmates for first time since 2003

This week's announcement means the federal government will resume executing death row inmates for the first time since 2003, ending an informal moratorium even as the country has broadly moved away from putting inmates to death.

Eight states have executed inmates or are planning to do so this year, according to the Death Penalty Information Center. Texas, by far, has executed the most people, with 563 inmates put to death since capital punishment resumed in the U.S. in 1977 after a 10-year pause.

Tennessee moved this year to drop one step of reviewing death penalty cases by the state Court of Criminal Appeals, which generally only took several months of the sometimes three decades of court review before an execution, with most of that coming in federal proceedings.

Another Tennessee execution is scheduled for December. Additionally, Charles Walton Wright had been scheduled to be put to death in October, but he died in prison in May.