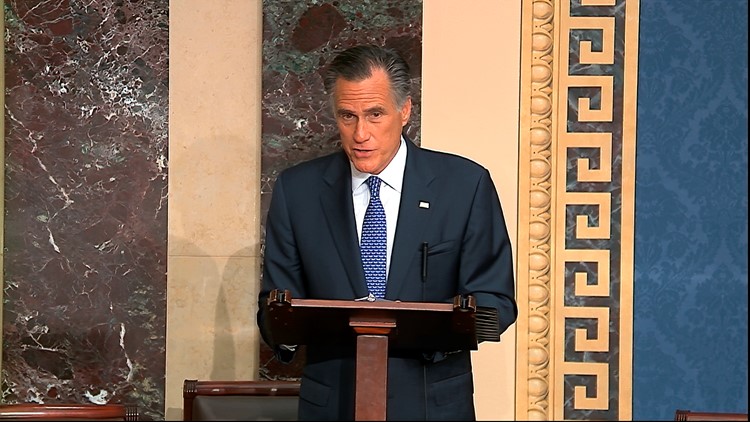 Photo by: AP
In this image from video, Sen. Mitt Romney, R-Utah, speaks on the Senate floor about the impeachment trial against President Donald Trump at the U.S. Capitol in Washington, Wednesday, Feb. 5, 2020. The Senate will vote on the Articles of Impeachment on Wednesday afternoon. (Senate Television via AP)

VERIFY: Is it possible to force a senator into a recall election?

The hashtag “#RecallRomney” surged onto Twitter’s trending tab yesterday following Senator Mitt Romney’s vote to find President Donald Trump guilty of abuse of power. Romney was the only Republican to find Trump guilty of either charge against him.

A recall election is an election that allows voters to vote out a representative before their term ends. They are typically started when a sufficient number of voters sign a petition.

But is a recall election possible in the United States? Can unhappy Republicans remove a senator from office before his term ends?

RELATED: Mitt Romney to vote to convict Trump, likely the only Republican to do so

Is it possible to force a United States senator into a recall election?

No. The only way to remove a senator from office before their term ends is through expulsion, which must be voted on by two-thirds of the Senate.

A Congressional Research Service document found that no member of Congress has ever been recalled at any point in the nation’s history. There’s no precedent for it.

That’s because there is no provision for recalling a member of Congress in the United States Constitution. The framers of the Constitution ultimately rejected a provision to include recall and instead put in a clause for expulsion. Originally, senators weren’t even selected by a popular vote of their constituents; they were selected by state legislatures until the passage of the 17th amendment in 1913.

Expulsion is a process in which two-thirds of the legislative body must vote to remove the legislator from office. For a senator, that’s the Senate. For a representative, that’s the House.

Expulsions are rare and it typically takes serious misconduct to warrant it. Most of the people in Congress who have been expelled were expelled because they supported an open rebellion against the United States.

There are states that allow for state legislators to face recall elections. The National Conference of State Legislatures includes 19 states plus the District of Columbia, that lay out rules that allow them to remove state officials before the end of their term through elections. Most of these states outline these rules specifically in their state constitution.

Members of Congress, however, are not affected by these state laws because rules governing their elections are outlined by federal laws. A United States senator cannot face a recall election.

Romney was elected as Utah’s junior senator in 2018 and sworn in January 2019. Since senators serve six year terms, he does not face another election until 2024.