On Thursday, Pence was part of a roundtable discussion in Memphis focusing on the work to combat the coronavirus pandemic. 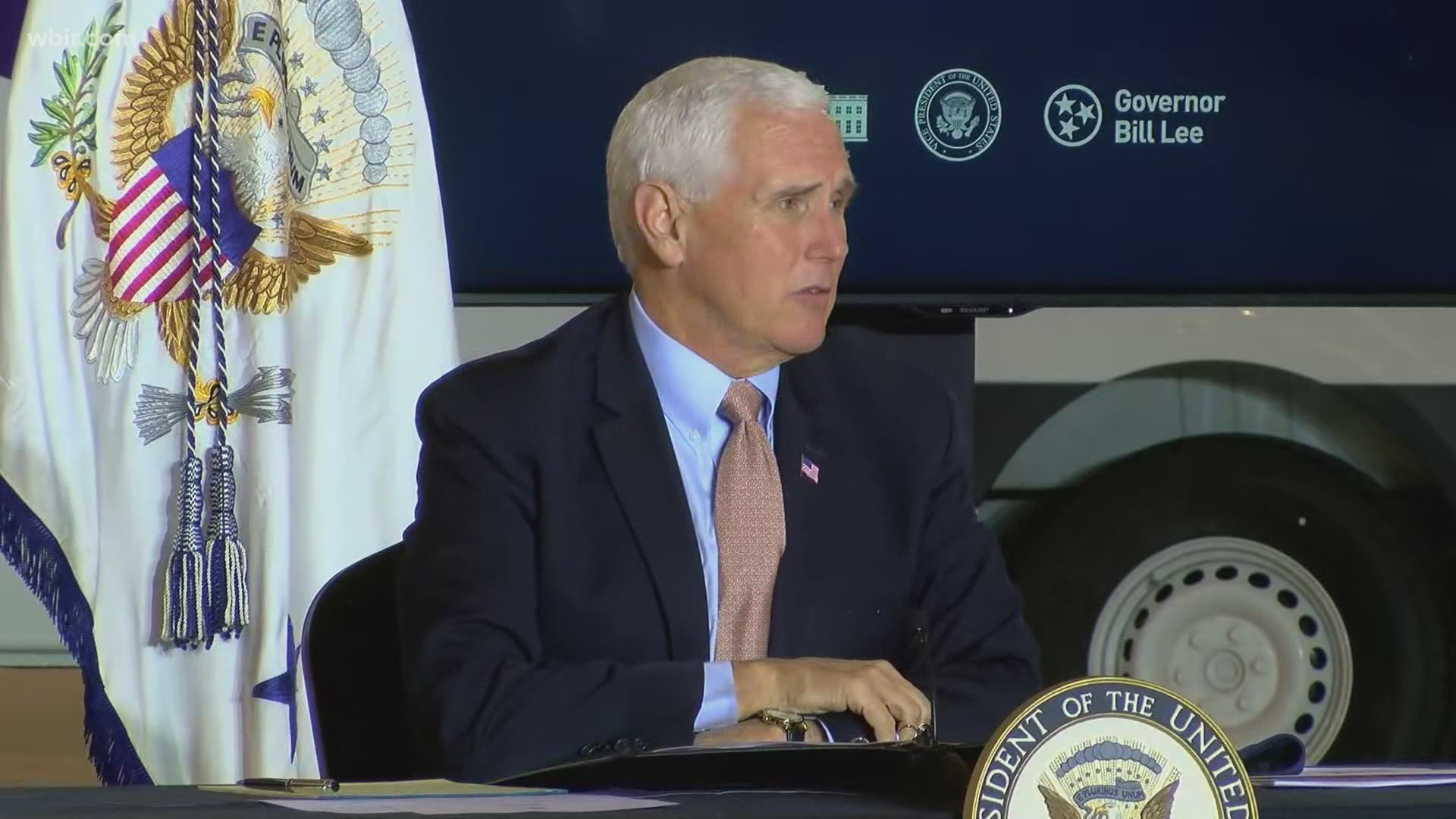 MEMPHIS, Tenn. — Vice President Mike Pence praised Tennessee's plan to distribute the COVID-19 vaccine within days of its approval during a visit to Memphis on Thursday.

Air Force Two arrived shortly after 1 p.m. Governor Lee and Memphis Mayor Jim Strickland greeted Pence and the other officials as they stepped off the plane.

At the roundtable, the vice president said Operation Warp Speed would bring hope for Americans, but said the pandemic is not yet over.

“With cases rising across the country, we are still going through a challenging time,” said Pence. “Help is on the way. We are just days away from being able to distribute a safe and effective coronavirus vaccine.”

Two drug companies -- Pfizer and Moderna -- have submitted their vaccines for emergency use authorization, which could be approved before Christmas. Tennessee is one of four states chosen to test the distribution plan for Pfizer, and FedEx will play a major role in the distribution of the vaccine.

He likened the effort to develop and distribute the vaccine to a modern-day Manhattan or Apollo project, with an emphasis on using private companies to make it all possible.

Vaccine distribution is up to the states

The CDC provided guidance on prioritizing the distribution of the vaccine, but it's up to states to make the final decisions.

Pence and the other leaders praised Tennessee's plan, calling it one of the best in the nation.

In Tennessee, healthcare workers, first responders, and residents of long-term care facilities will be first in line for the vaccine. It will be administered in two doses.

Dr. Piercy said the state has contracted with CVS and Walgreens to administer the vaccine at long-term care facilities.

The state has worked to ensure equity in the distribution plan, to ensure minority communities have equal access, and is working hard to build trust in the vaccine across the state.

While no other details about the distribution plan were released, Patrick Sheehan with the Tennessee Emergency Management Agency indicated that the Tennessee National Guard would likely be part of the process.

He said the need for the vaccines to be stored at ultra-cold temperatures has created a particular challenge for the distribution, but state leaders are developing strategies and contingency plans to deal with it.

He said it was clear that it would be easier to bring people to the vaccine, rather than delivering it directly to them.

"We are up to the challenge This is what we do. We are ready for it," he said.

Gov. Lee thanked Pence and the administration for making the vaccine possible.

At the roundtable, Vice President Pence asked for a round of applause to honor the country's healthcare workers for their commitment to helping people through the pandemic.

He also praised the public/private partnerships that have made it possible to develop a safe vaccine for COVID-19 in record time, and those that will help in its distribution.

"Only in America," he said, would that be possible.

Vice President Mike Pence is set to make a stop in the Bluff City on Thursday afternoon. The main focus of Pence’s visit is to discuss Operation Warp Speed and a plan to distribute vaccines.

Operation Warp speed launched in May this year. The purpose is to provide funding for the development of COVID-19 vaccines and speed up the usual time it takes to create one.

On Thursday, Pence will be a part of a roundtable discussion focusing on the work to combat the coronavirus pandemic.

They will also discuss Tennessee’s plan to push the vaccine out once it has been approved. Governor Bill Lee will also be at the roundtable.