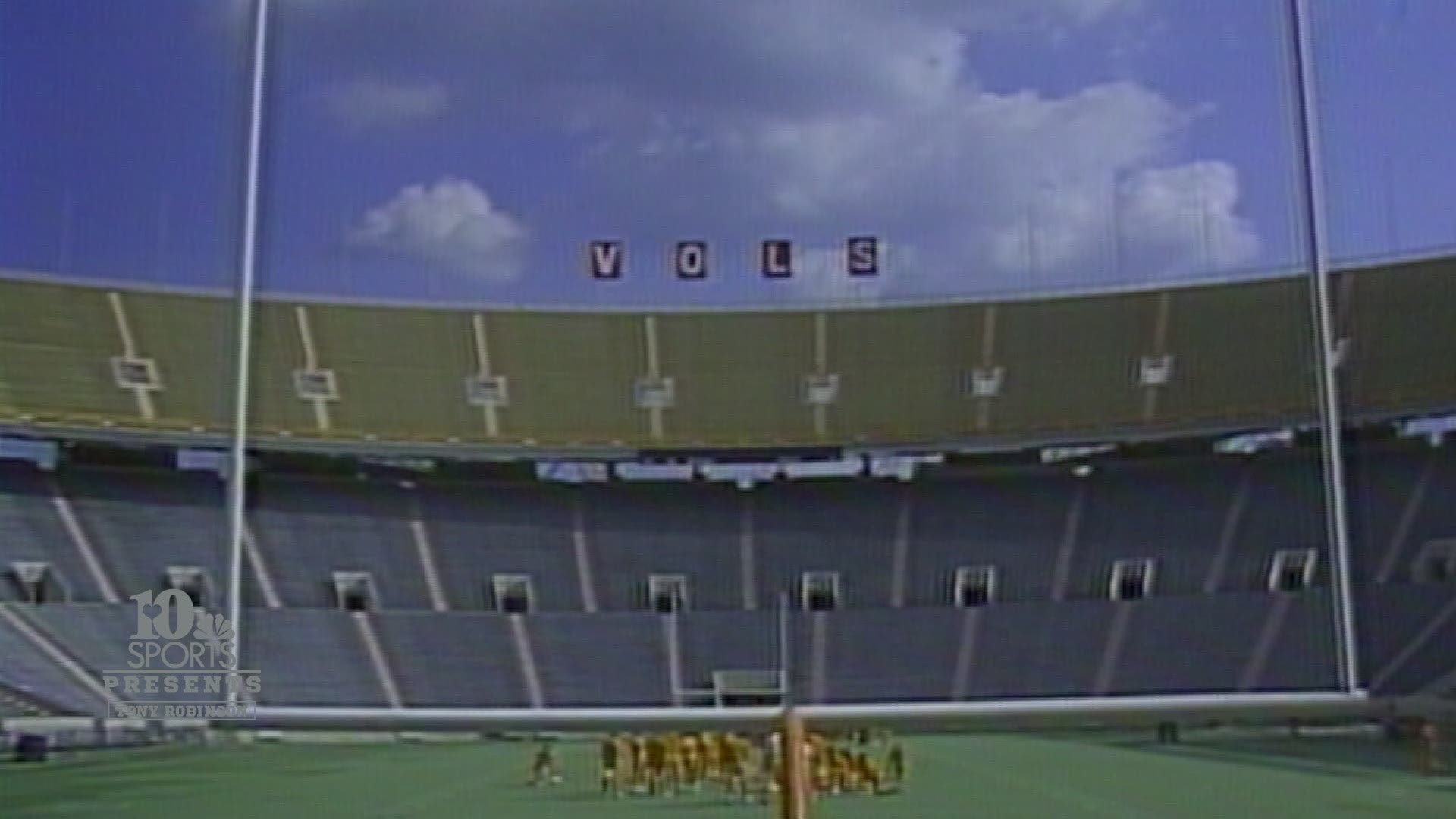 There's more to the story than meets the eye. It has never rung truer as former Tennessee quarterback Tony Robinson and his former target, tight end Jeff Smith are in the midst of umpiring a youth baseball game.

It's been more than three decades since they've suited up in orange and white, and it was their senior year in 1985 when Robinson's story took a wild turn.

"Well everybody likes to talk about the Auburn game," said Robinson. "Everybody likes the Auburn game. I like that game too. It was a shutdown game for us. That was just one of those games where I wasn't having it. We weren't going to have that kind of beat down on our field. We were going to do the beatdown."

"It's against No.1 Auburn, Bo Jackson was obviously everyone's leading candidate for the Heisman that year," former UT defensive back Chris Treece recalls. "Going into the locker room and seeing the guys, how they were interacting with each other, it was a different feel. It just meant more because it was Auburn and Bo Jackson. So much hype about that game, him coming in. He was going to run all over Tennessee, a lot of press that game. Tennessee came out and shut Bo down, and Tony Robinson had a Heisman-worthy day. It was a special day."

"Tony Robinson is a super guy, and if his line continues to block for him like they did this afternoon, he will probably win the Heisman," said a young Bo Jackson during a post-game interview.

Robinson was at the height of his college career, when three games later, it all came crashing down.

"I got hurt against Alabama so my season was over with."

"When he hurt his knee in the Alabama game, all of us remember the hit," said former WBIR sports director and current 'Voice of the Vols', Bob Kesling."The guy came low and kind of jacked his knee backwards, and those type of injuries back then were devastating for quarterbacks."

The Vols were able to pick up the pieces with backup quarterback Daryl Dickey, and went on to win the SEC Championship and beat Miami in the Sugar Bowl.

While Tennessee was celebrating success, things were about to get even worse for Tony.

"A lot of us were just hoping that he's going to pull this all together and the carrot out there being able to play for the NFL, maybe that would be the thing that brought it all together," said Kesling. "But it wasn't."

Robinson was charged with selling cocaine to an undercover officer and sentenced to jail.

He would, in fact, go on to play professional football, but never imagined the path he's taken to get there.

In 1987, two years into Robinson's sentence, NFL players went on a mid-season strike, leaving team owners no choice but to quickly find guys to suit up.

"The games counted, you hoped they had rounded up a bunch of guys that maybe were working at car washes, drug stores, or something like that. Mechanics or truck drivers, but they found enough guys that could play."

The strike created a one in a lifetime opportunity. Robinson was able to leave jail on a work-release program to play football.

"All of the sudden the strike happened and I was a Washington Redskin," said Robinson.

The former Tennessee quarterback would watch from a distance as the Redskins, made up of replacement players nicknamed scabs, were winning with quarterback Ed Rubbert.

Three games in, the newly dubbed 'Scabskins' were met with their most daunting task yet. A game against the Dallas Cowboys for first place in the NFC East. Dallas had more than 20 players cross the picket line, including two future hall-of-famers, Washington had none.

The final score, Redskins 13, Cowboys 7. The backup replacement quarterback led the Redskins to one of the biggest upsets in league history.

"You couldn't have scripted it better. It was amazing, the whole thing," said Robinson.

That win turned out to be his last game with the Redskins. The strike was over, and Robinson was no longer a free man.

"I was hoping to get picked up by somebody else instead of having to come back to Knoxville, turn myself in, go back to jail."

"Those scabs as they called them, some teams accepted them and a lot of teams didn't, and apparently with Tony's baggage nobody wanted to take a shot on him," said Kesling.

The Washington veterans picked up where they left off and went on to beat John Elway and the Broncos to win Super Bowl XXII.

Although the replacement players helped the team secure a spot in the playoffs, they were never recognized for their contributions.

Decades later, Robinson spends much of his time working with kids.

"It's important to let the kids know just because you got in trouble before doesn't mean your life is over with. You can still turn this thing around and still be a positive role model."

Robinson now wears a symbol of redemption as proof. In 2018, the Redskins organization had a change of heart, and in June, the 1987 scabs were given Super Bowl rings.

"Everyone was always rooting for Tony," said Kesling. "Now to see him have some good things happen to him, there aren't many guys out there that have Super Bowl rings, and that's special."

"He went on quite a journey."